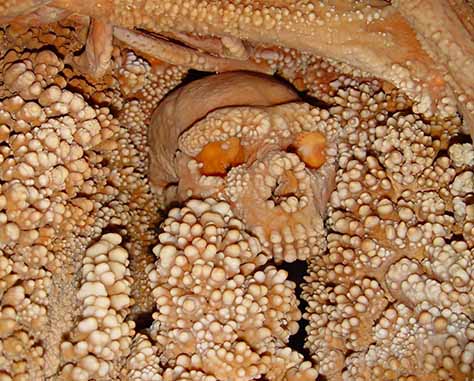 The Altamura Man is a partially preserved fossil of the genus Homo. The skeleton was first thought to be an example of Homo heidelbergensis and was also described as having characteristics of Homo neanderthalensis. It has more recently been dated to 130,000 years ago and classified as an archaic Homo sapiens with some Neanderthal features. It was found embedded in rock and has been left in situ. It was discovered in October 1993 by speleologists in a limestone cave, the Grotta di Lamalunga, near the city of Altamura, Italy.

The discovery happened in a karst borehole, formed by the action of running water on limestone that is composed of a complex system of caves next to an elongated valley secluded among hills, typical of the Altamura Murgia in Apulia. During the initial exploration phase some members of the Centro Altamurano Ricerche Speleologiche (CARS, the Centre for Speleologic Research) found the deposit of which the find was the main feature. On the hillside facing the valley an access leads to the cave about 8 meters in depth. Through vertical shafts towards the surface that can be open or sealed for long or short periods, this type of cave has the ability to collect within it materials transported by the surface runoff of rainwater. This explains the presence of numerous remains, some of which quite voluminous, of ancient fauna.

The team led by Prof. Vittorio Pesce Delfino of the University of Bari proposed soon after the discovery a first estimate of the find, based only on morphology, which would have identified the human remains with a type preceding the most ancient types of classic Homo neanderthalensis and subsequent to the phases of Homo erectus. A subsequent estimate of the dating involved an interval between 400,000 and 100,000 years before present, with the most likely values around 150-250,000 years ago.

The reference to an archaic version of Homo neanderthalensis also implies the find must show morphological features antedating the typical features of Homo neanderthalensis. Studies carried out keeping the find on the discovery site have verified this aspect of typical Neanderthal features (morphology of eye-sockets and upper orbit, osseous thickening, lack of canine fossa and presence of a clear edge on the maxilla, thickening of the occipital bone, feature of the mastoid process, existence of a retromolar space and profile of the upper margin of the ascending mandible ramus). Some characteristics match features typical of Homo sapiens, among which in particular the convexity of the occipital bone scale. Interest besides the purely paleoanthropological lies in the natural majesty of the whole complex shown by the bones in the karstic setting that encased them, cementing them together and in the completeness of the skeleton.

The entire pre-existing knowledge of European Neanderthals came from numerous but fragmented finds, for example a skullcap in Germany, and skull fragments more or less voluminous but never complete in Greece, Italy, Spain and France, leaving anthropologists the difficult task of identifying the characteristics and compatibilities of the missing pieces. By contrast, in Altamura, all the various bone segments are perfectly preserved, which allows the examination of the morphological compatibility to shift from a problem of limited size of other finds to a more challenging problem of evolutionistic and morpho-functional interpretation.

In spite of this ideal situation, the Grotta di Lamalunga find presents exceptional problems in methodological study, due to the impossibility of removal of the bones from their limestone matrix with procedures that can guarantee undamaged recovery. To address this the ŇSarastroÓ project has been carried out, setting the access to the discovery cave with the Ňfield museumÓ approach, according to which a technological infrastructure allows scientific study to be done remotely, leaving the find totally undisturbed and protected in its original site.

Altamura Man yields oldest Neanderthal DNA sample   PhysOrg - April 3, 2015
A team of researchers working in Italy has confirmed that Altamura Man was a Neanderthal and dating of pieces of calcite which were on the remains has revealed that the bones are 128,000 to 187,000 years old. In their paper published in the Journal of Human Evolution, the team describes how they extracted a small bone sample and examined it and what they found by doing so. It is believed that Altamura Man wound up in such a peculiar spot after falling in a well and getting stuck - it is assumed he starved to death, or died from lack of water intake. The researchers next plan to test the DNA sample to see if it can be sequenced - if so, they are hopeful it might reveal new details about the evolution of hominids in general and perhaps more about the early history of the Neanderthal.