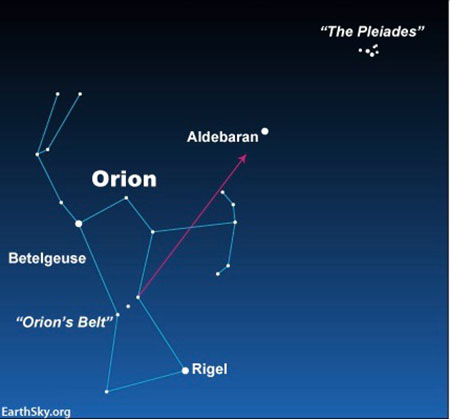 This star is also called the Bull's Eye because of its striking orange color and its location in the bull's head shaped asterism. In 1997 a substellar companion was reported but subsequent observations have not confirmed this claim.

The Romans called it Palilicium.

In Chinese it is known as Bixiuwu, the Fifth Star of the Net

in Hindu astronomy it is identified as the lunar mansion Rohini and as one of the twenty-seven daughters of Daksha and the wife of the god Chandra.

Approximately 5,000 years ago, the rising of Aldebaran marked the vernal equinox and was the beginning of the Babylonian New Year.

Hebrews called Aldebaran God's Eye and Aleph, Akkadian Gis-da, Furrow of Heaven, Greek Omma Boos, Latin Oculus Tauri, early English the Bull's Eye; and Hindus Rohini the Red Deer - the name of the river in Nepal where the Buddha was born at the time of the May full moon, around 563 BCE.

Aldebaran is one of the easier stars to find in the night sky, partly due to its brightness and partly due to its spatial relation to one of the more noticeable asterisms in the sky. If one follows the three stars of Orion's belt from left to right (in the Northern Hemisphere) or right to left (in the Southern), the first bright star found by continuing that line is Aldebaran.

This brilliant star, has been used for centuries in navigation, and is known by many civilizations to be connected with the spirits of rain and the fertility of the Earth.

Aldebaran is called the Eye of Revelation. Life is filled with Metaphors and Revelations. The evolutionary process is essentially a journey into consciousness awareness through Revelation. As we evolve, we perceive more than we ever knew was existent or perceptible, yet we are only perceiving what has always been there.

Aldebaran is also known as Buddha's Star, the Star of Illumination, God's Eye, and the Eye of the Bull. 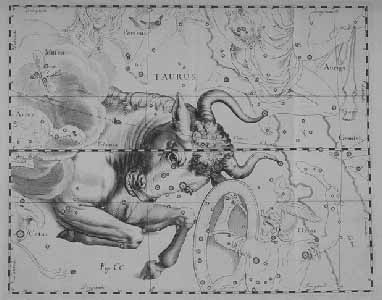 The Taurus constellation from Uranographia by Johannes Hevelius (1690).
Aldebaran is the star near the left eye of the bull.

However it all began for him, or maybe it was his destiny, Adolph Hitler was guided by his fascination with the occult, forever in search of its mysteries, wanting to creating the perfect Ayran race based on mythic Atlanteans, seeking the Spear of Destiny among other artifacts, and as some believe discovering a crashed UFO in 1936 in the Black Forest - Project Haunebu. Some researchers connect Hitler with Argentina, Antarctica, and aliens from Aldebaran who allegedly helped him build UFOs and escape through a portal in Antarctica after he lost the war in 1945.

"Adolf Hitler lived in Patagonia, in southern Argentina, after fleeing Germany in 1945," claims Argentinian journalist Abel Basti in a tour-guide-style book which discusses the locations in the Andean foothills which served as a refuge for several former Nazi leaders."

"Hitler and his lover, Eva Braun, did not commit suicide - rather, they fled to Argentina's shores aboard a submarine and lived for years in the vicinity of San Carlos de Bariloche, a tourist site and ski haven about 1,350 kilometers (810 miles) southwest of Buenos Aires, according to the journalist."

"He (Basti) is displeased when asked if his book challenges the official story of the Hitler/Braun suicide, saying that the corpses of Hitler and his lover were never found, as is the case with other Nazis who allegedly committed suicide."

"'The only 'official' story is the report made by General Zhukov (commander of the Soviet armies that occupied Berlin--S.C.) to the Kremlin, stating that Hitler and several Nazi leaders had escaped, presumably to Spain or the Americas, and this is what Stalin advised the U.S. government,' he retorted."

"Basti's book includes a photo of the Incalco Ranch (In the language of the indigenous Nahuel people of Argentina, Incalco means near the water --J.T.), located in Villa la Angostura on the shores of Lago Nahuel Huapi (lake), 80 kilometers (50 miles) north of Bariloche. This was the refuge chosen by Argentinian Nazis to hide Hitler and Eva Braun."

"This residence, set amidst a pine forest and which can only be reached by boat or hydroplane, belonged to Argentinian businessman Jorge Antonio, one of the most trusted aides of two-time president Juan Domingo Peron." (Editor's Note: Juan Domingo Peron was president of Argentina twice, first from 1946 to 1955 and the second time in 1973 and 1974.)

"Basti makes mention of Rudolph Fraude, son of Ludwig Fraude, the German millionaire, as a key player, in his capacity as Peron's secretary, in placing former Nazis in Argentina, among them (Adolf) Eichmann, who was captured in 1960 outside Buenos Aires by Israeli commandos. He was executed two years later in Israel."

"The book's author, having been involved in several Nazi-related investigations with European television networks, claims that Hitler also lived at Hacienda San Ramon, 10 kilometers (6 miles) east of Bariloche, which belonged at the time to the (German) principality of Schaumberg-Lippe."

"The epic distance that exists between Berlin and Patagonia was shortened, according to Basti, by the wave of German submarines that reached the shores of southern Argentina after the Second World War."

(Editor's Note: True enough. Two German submarines, the U-530 and the U-977, were captured by the Allies in the South Atlantic in July and August 1945 after making mysterious voyages to Argentina.)

"'There is numerous and reliable evidence that Nazis fled to Argentina, with the arrival of Nazi U-boats in Patagonia,' he noted, recalling the 'vital assistance' offered by Peron's government at the time 'to admit the Fuhrer's henchmen into that country.'"

"Basti, who lives in Bariloche and initiated his research into the relocation of Nazis to the picturesque city, claims to have the accounts of passengers aboard the U-boats, Nazis who reached Patagonia - accounts which will constitute the basis of his second book." (See the Chilean newspaper Las Ultimas Noticias of Santiago de Chile for January 2, 2004, "Bariloche was Hitler and Eva Braun's final refuge." Muchas gracias a Scott Corrales y Liliana Nunez Orellana para esto articulo de diario.)

(Editor's Comment: The Hitler-in-Argentina tale is an old one. It first surfaced in a book by Ladislao Szabo entitled Hitler Esta Vivo (Spanish for Hitler Is Alive-- J.T.) back in 1947. A second book by Michael X. Barton was published in 1969 entitled We Want You: Is Hitler Alive? Then Ernst Zundel took up the banner in 1974. Out of these books has sprung the "Saucer Nazi" theories.

Both theories agree that Hitler escaped from the Fuhrerbunker in Berlin and fled to Argentina in a U-boat. However, believers in the Antarctic Reich theory contend that Hitler left Argentina in the early 1950s and moved to Neuschwabenland (German for New Swabia - J.T.), an SS colony under the ice of Antarctica, right next to the prehistoric ruins of Kadath. Here, they say, Adolf lived out his life, resuming his artist's career and painting a series of Antarctic icescapes.

The Redemptionists believe that Hitler traveled to the moon in 1954 and met with aliens from Aldebaran, 68 light-years from Earth. The aliens brought Adolf back to Aldebaran with them. But he will come again in the flagship of a vast Aldebarani space armada, to "redeem" Earth. Sort of like a Cosmic Douglas MacArthur. Presumably, these aliens have figured out a way to stop the clock on aging, because, come April 20, 2004, Adolf is going to be 115-year-old.