Airglow (also called night glow) is a faint emission of light by a planetary atmosphere. In the case of Earth's atmosphere, this optical phenomenon causes the night sky never to be completely dark, even after the effects of starlight and diffused sunlight from the far side are removed.

The airglow phenomenon was first identified in 1868 by Swedish scientist Anders Angstrom. Since then, it has been studied in the laboratory, and various chemical reactions have been observed to emit electromagnetic energy as part of the process. Scientists have identified some of those processes that would be present in Earth's atmosphere, and astronomers have verified that such emissions are present. Read more 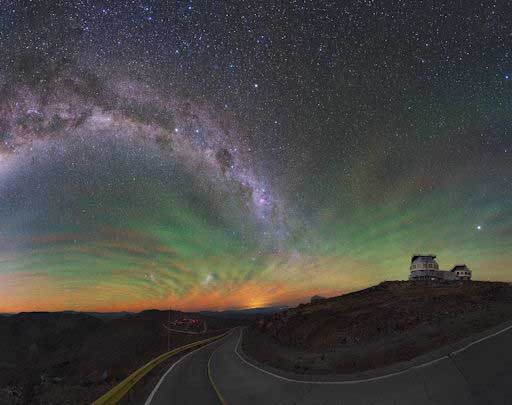 Green Airglow over the Atacama Desert: Not all green lights in the sky are auroras. Yuri Beletsky discovered this for himself on March 18, 2016, when he looked up from the Atacama desert of Chile.

The green light is called "airglow." Airglow is a luminous bubble that surrounds our entire planet, fringing the top of the atmosphere with aurora-like color. Although airglow resembles the aurora borealis, its underlying physics is different. Airglow is caused by an assortment of chemical reactions in the upper atmosphere driven mainly by solar ultraviolet radiation; auroras, on the other hand, are ignited by gusts of solar wind. Green airglow is best photographed from extremely dark sites on nights when the Moon is new or below the horizon. It often shows up in long exposures of the Milky Way. Browse the gallery for more examples:

"The sky was literally shining due to quite intense airglow and we were really lucky to witness it," says Beletsky. "It was so strong that one could hardly see Magellanic clouds through those colorful emissions. In my photo, the domes of the 6.5-m Magellan telescopes are on in the right."


Far from being truly black, the night sky casts down upon the earth's surface a soft, weak illumination. Half or less of this light comes from the stars; the rest is produced in the air itself by a number of different processes. Called the night airglow, this dim, relatively uniform light is so weak that only the aware observer can detect its existence with naked eye.

The night airglow has its daylight counterpart, too. Sunlight shining upon the high atmosphere during daytime and twilight gives energy to the atoms and molecules of the air, causing them to directly reemit some of this energy in the form of light. The resulting dayglow and twilight airglow emissions can be quite bright. Still, they pale into near-insignificance compared to the brightness of direct sunlight, so we are generally unaware of them in our daily living.

The night airglow also derives its energy from the sun, but various delayed-action processes permit storage of the energy and its later emission of light after the sun is gone. These processes act only in the upper atmosphere, at altitudes of 60 km (40 ml.) and above.

Like its brighter and fast-moving relative the aurora, night airglow has strong emissions at specific wavelengths. At a wavelength of 5577 Angstrom units there is a strong green emission from oxygen. There is a deep red emission at 6300 Angstroms, also from oxygen, and a yellow emission at 5893 Angstroms from sodium atoms in the atmosphere.

In addition to these single-wavelength emissions, it seems that the night airglow may have a continuum of weak emission at all wavelengths, much as the sun itself has. Students of the airglow are not certain about this though because the appearance of a continuum can arise from the overlapping of many emissions at specific wavelengths.

The night airglow sometimes produces more light than the stars, and consequently can be the major nighttime source of natural light, especially at high latitude where the airglow emissions are brightest. If there is snow on the ground, the combined starlight and night airglow can provide light for people to see reasonably well by. Despite the fact that the night airglow is a major source of nocturnal illumination, there has not been enough scientific investigation to give a really satisfactory explanation of the phenomenon.