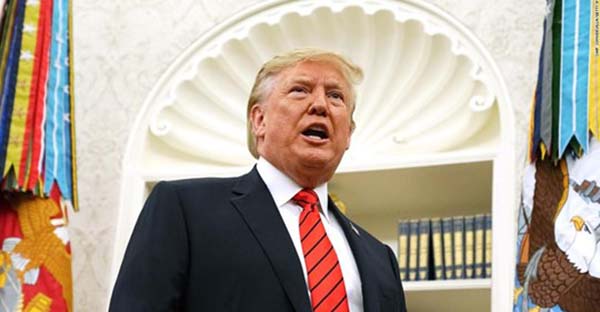 Gupta stunned by Trump-Fauci difference at briefing - President Trump made false claims about possible treatments for the coronavirus, and expert Dr. Anthony Fauci had to tamp down optimism about the treatments at a press conference


Obviously Trump was not responsible for coronavirus but it was his initial response, lies, deceptions, to cover his mistakes that has hampered efforts to deal with the pandemic. This latest showing of his inability to lead because it might cut into his personal agenda for reelection - is what people are witnessing. In 2018 the White House made a dangerous mistake by dismantling the Pandemic Response Unit within the National Security Council. Now Trump is covering by saying the same rules exist just under different titles which is not true.

There is a dual lens on how the world views Trump. Followers repeat his manta that he is a stable genius and there is a method to his madness. Others call him a diversion, narcissist, and other derogatory expletives that encompass a long list. At this point in reality it really doesn't seem to matter. People are programmed the way they are and so they shall believe and respond.

In a New York minute the challenges, unpreparedness, and collateral damage of coronavirus presented themselves across the country while Trump stood before the nation contradicting healthcare professionals.

With nothing left for him to do as stock markets came crashing down leaving state and local officials to take control where the federal government was ineffective - Trump was forced to reevaluate the situation and make somewhat of a change as long as he believes he remains in control.

Trump did not sustain his tone of being in control as he is capable of discipline for only short periods of time. He tethers his moves to new media which is why this happened. Peter Alexander of NBC News asked Trump what he would say to Americans who are frightened amid the coronavirus pandemic. Trump viciously attacked Alexander in an extended rant. Saturday - NBC News staffers fired back at Trump, calling his attack on reporter 'outrageous' and 'absolutely nuts'

He also erupted at a number of other reporters like a petulant child who doesn't get what he wants and has a fit. Lots of criticism about his handling or not handling of the coronavirus and the tanking of the stock market below levels from when he took office. The market was overly inflated and not a true reflection of the economy.

I've heard two lines of thought as to Trump and coronavirus. The first one is that it was created to take him down. The more current version is to make him the hero who saves the country and solves the problems which is why I feel he attempted to change his behavior and messaging. But as everyone sees through him now he can't get away with those shenanigans anymore. People are dying and more will and it's all on his watch.

In truth it is the algorithm of our simulation that creates everything and in end times uses certain events as vehicles to showcase what is yet to come on a much larger global scale if that is possible. It really has nothing to do with Trump at all but humans - especially those consumed with conspiracy theories to make their day - look to find fault and he is such an easy target due to his behavior.

I believe Trump has figured out that by Election Day the virus will be contained with him as the hero who saved the people and promises to rebuild the economy making it stronger and better than ever before blah blah blah blah blah.

From this he probably expects a Nobel Peace Prize. Again those who align with him will vote to re-elect him - the Democratic choice Joe Biden unless something else something happens - and probably will.

If by now you have not figured out that "something else" is calling the shots that go beyond the duality of our political and social systems then you are still asleep in the "dream".

That "something else" or the hologram that creates the illusion of space-time - shifts our focus constantly - to keep us grounded in physical reality. That's why Trump is such a great player. Every day that you refocus on his behaviors - he is diverting your attention over and over again. I doubt that he even realizes he's doing it but that is part of his programming. Shifting frequencies or consciousness experiences used to happen in what appears as a reasonable amount of time. Now it's happening on a daily basis and it's going to accelerate exponentially so you'll never know which way to look and never see the end coming.

watched Trump address the nation. His body language and that nose sniffling thing he does when he's nervous spoke of fear and uncertainty on many fronts. The future of his presidential campaign generally rests on .. a strong market and his ability to address large crowds and convince them that he is a stable genius. Not happening for now. Apparently Trump lives in the "state of denial."

I'm really not sure who could properly lead the country in these trying times but it's not Trump. People who believe that Trump is a stable genius, there is a method to his madness, and he is a great leader - really need to reassess and wake up to what's going on.


Trump address sparks chaos as coronavirus crisis deepens President Donald Trump set out to steady a rattled nation and a diving economy in a solemn Oval Office address, but instead sowed more confusion and doubts that he is up to handling the fast-worsening coronavirus crisis. Trump spoke to the nation at a fearful moment, when the rhythms of everyday American life are starting to shut down -- with schools closing, the NBA suspended, hospitals on high alert and movie icon Tom Hanks saying he and his wife have the disease. The confusion was symptomatic of an administration that has often struggled to frame detailed policies and present them coherently. Trump's top assignment on Wednesday was to show that he was in charge and that he appreciated, finally, the grave nature of the weeks that lie ahead. But the confusion over the travel ban turned his speech into something of a debacle and may up exacerbating uncertainty over his leadership. His travel ban announcement was made apparently without consultation with the travel industry or US allies and seems set to cause massive disruption that will deepen already cascading economic damage unleashed by the crisis.


Bill Gates 2015 - Being Unprepared for a Pandemic


Bill Gates recorded this at a TED conference in 2015. He was right. It would only stand to reason that a global pandemic would happen as so many of us predicted. What he was stressing is the need for preparedness. In 2018 the White House made a dangerous mistake by dismantling the Pandemic Response Unit within the National Security Council. You know the rest about Trump's early response to coronavirus - denial and deflection. Trump, like all narcissist, needs to put the blame somewhere other than himself when he is wrong.