Tomb of Sobekhotep IV at Abydos 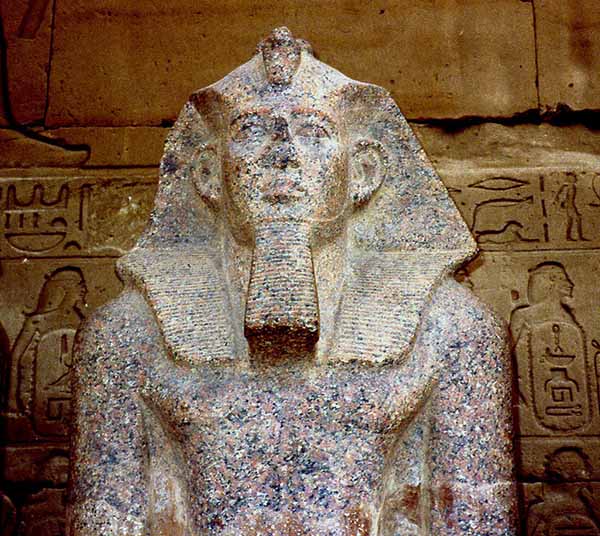 Khaneferre Sobekhotep IV was one of the more powerful Egyptian kings of the 13th Dynasty (c. 1803 BC - 1649 BC), who reigned at least eight years. His brothers, Neferhotep I and Sihathor, were his predecessors on the throne, the latter having only ruled as coregent for a few months.

Sobekhotep states on a stela found in the Amun temple at Karnak that he was born in Thebes. The king is believed to have reigned for around 10 years. He is known by a relatively high number of monuments, including stelae, statues, many seals and other minor objects. There are attestations for building works at Abydos and Karnak.

Sobekhotep was the son of the 'god's father' Haankhef and of the 'king's mother' Kemi. His grandfather was the soldier of the town's regiment Nehy. His grandmother was called Senebtysy. Sobekhotep might have had several wives, only one of which is known for certain, the "king's wife" Tjan. Several children are known. These are Amenhotep and Nebetiunet, both with Tjan as mother. There are three further king's sons: Sobekhotep Miu, Sobekhotep Djadja and Haankhef Iykhernofret. Their mother is not recorded in extant sources.

The royal court is also well known from sources contemporaneous with Neferhotep I, providing evidence that Sobekhotep IV continued the politics of his brother in the administration. The Vizier was Neferkare Iymeru. The treasurer was Senebi and the high steward a certain Nebankh.

He was perhaps buried at Abydos, where a huge tomb (compare: S10) naming a pharaoh Sobekhotep was found by Josef W. Wegner of the University of Pennsylvania just next to the funerary complex of Senusret III of the 12th Dynasty. Although initially attributed to pharaoh Sekhemre Khutawy Sobekhotep I, the style of the burial suggests a date of the tomb under Sobekhotep IV

While Sobekhotep IV was one of the most powerful 13th dynasty rulers and his control over Memphis, Middle Egypt and Thebes is well attested by historical records, it is believed that he did not rule over a united Egypt. According to the egyptologist Kim Ryholt, the 14th Dynasty was already in control of the eastern Nile Delta at the time.

Alternatively, N. Moeller and G. Marouard argue that the eastern Delta was ruled by the 15th Dynasty Hyksos king Khyan at the time of Sobekhotep IV. Their argument, presented in a recently published article, relies on the discovery of an important early 12th dynasty (Middle Kingdom) administrative building in Tell Edfu, Upper Egypt, which was continuously in use from the early Second Intermediate Period until it fell out of use during the 17th dynasty, when its remains were sealed up by a large silo court.

Fieldwork by Egyptologists in 2010 and 2011 into the remains of the former 12th Dynasty building, which was still in use at the time of the 13th dynasty, led to the discovery of a large adjoining hall which proved to contain 41 sealings showing the cartouche of the Hyksos ruler Khyan together with nine sealings naming the 13th dynasty king Sobekhotep IV.

As Moeller, Marouard and Ayers write: "These finds come from a secure and sealed archaeological context and open up new questions about the cultural and chronological evolution of the late Middle Kingdom and early Second Intermediate Period." They conclude, first, that Khyan was actually one of the earlier Hyksos kings and may not have been succeeded by Apophis - who was the second last king of the Hyksos kingdom - and, second, that the 15th (Hyksos) Dynasty was already in existence by the mid-13th Dynasty period since Khyan controlled a part of northern Egypt at the same time as Sobekhotep IV ruled the rest of Egypt as a pharaoh of the 13th dynasty.

This analysis and the conclusions drawn from it are questioned by Robert Porter, however, who argues that Khyan ruled much later than Sobekhotep IV. Porter notes that the seals of a pharaoh were used even long after his death, but also wonders whether Sobekhotep IV reigned much later and whether the early Thirteenth Dynasty was much longer than previously thought.

In Ryholt's chronology of the Second Intermediate Period, Khyan and Sobekhotep IV are separated by c. 100 years. A similar figure is obtained by Nicolas Grimal. Alexander Ilin-Tomich had a further close look at the pottery associated with the finds of seal impressions and draws parallels to Elephantine where one of the pottery forms of the find appears in a rather late Second Intermediate Period context. Ilin-Tomich concludes that there is no reason to believe that Khyan and Sobekhotep IV reigned at the same time. The level in which the seal impressions were found is later than Sobekhotep IV.

Regardless of which theory is true, either the 14th dynasty or the 15th dynasty already controlled the Delta by the time of Sobekhotep IV. 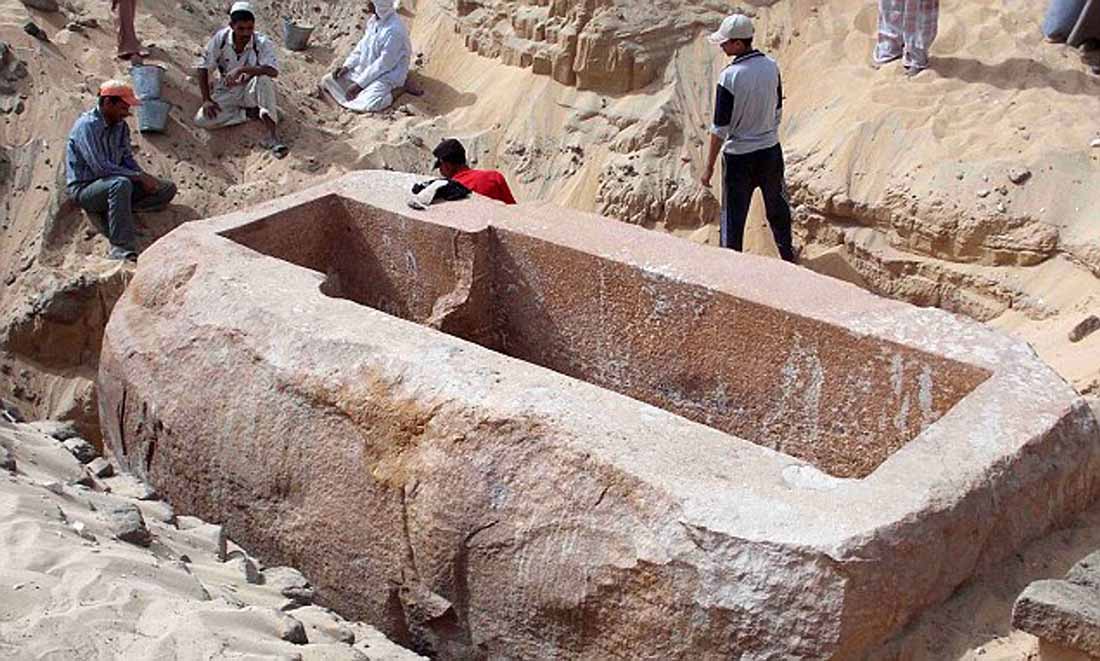 
It has remained a secret for thousands of years, but now a huge pink tomb of an ancient Egyptian pharaoh has identified approximately one year after it was discovered.

The vast 3,800-year-old quartzite sarcophagus belongs to a little-known 13th Dynasty king called Sobekhotep I, according to the Egyptian government.

It was discovered by a team of U.S. and Egyptian archaeologists at the Abydos site near Sohag in Egypt and could shed light on a little known period of history.

Researchers from the University of Pennsylvania and EgyptŐs Antiquities Ministry deciphered stone pieces inscribed with the pharaoh's name, which also show him sitting on a throne, to link the tomb to its owner. "He is likely the first who ruled Egypt at the start of the 13th Dynasty during the second intermediate period," the minister said.

King Sobekhotep I is thought to have ruled the 13th Dynasty but little is known about him and his kingdom or even when the dynasty began exactly, which makes the discovery particularly important.

Historians believe that it began sometime between 1803BC and 1781BC but they are keen to establish a precise date.

He is thought to have ruled for almost five years, which was the longest rule at this time according to ministry official Ayman El-Damarani. 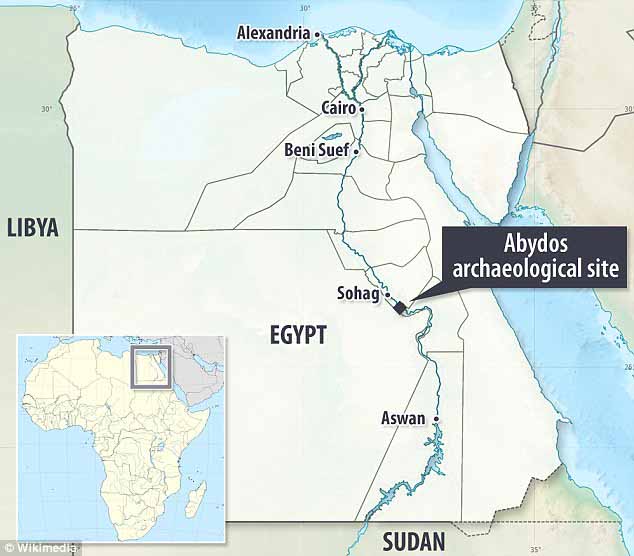 The tomb was discovered at the Abydos site (pictured) near Sohag in Egypt and could lead to more royal tombs being unearthed. Last week it was announced that the same archaeological team had uncovered the Tomb of pharaoh Sobekhotep I

The sacred city of Abydos is located west of the Nile and was once a cemetery for Egyptian royalty as well as a popular pilgrimage site where people journeyed to worship the god Osiris, according to The Huffington Post.

Temples, royal boat pits and the tombs of kings have previously been unearthed by University of Pennsylvania archaeologists who have been excavating the site over three decades.

The team has already found fragments of canopic jars in the tomb, which were used to preserve internal body organs, TimesLive reported.

Gold objects thought to be owned by the king were also discovered and it is hoped that the site will reveal more details about the king's life.