Shepseskaf was the fifth pharaoh of the Fourth Dynasty of Egypt during the Old Kingdom. He reigned six to eight years starting circa 2510 BC. The only activities firmly datable to his reign are the completion of the temple complex of the Pyramid of Menkaure and the construction of its own mastaba tomb at South Saqqara, the Mastabat al-Firoaun, "stone bench of the pharaoh".

Egyptologist George Andrew Reisner proposed that Shepseskaf was Menkaure's son based on a decree mentioning that Shepseskaf completed Menkaure's mortuary temple. This, however, cannot be considered a solid proof of filiation since the decree does not describe the relationship between these two kings. Furthermore, the completion of the tomb of a deceased pharaoh by his successor does not necessarily depend on a direct father/son relation between the two.

The mother, wives and children of Shepseskaf are unknown. If Menkaure was indeed his father, his mother could have been one of Menkaure's royal wives Khamerernebty II or Rekhetre. It's possible that Shepseskaf's wife was Khentkaus I, but this is far from certain. Queen Bunefer has been suggested as a possible wife of Shepseskaf based on the titles as a priestess of Shepseskhaf. She may, however, have been a daughter who served as a priestess in the cult for her father. Finally, Khamaat, the wife of a nobleman named Ptahshepses and daughter of a king, may be a daughter of Shepseskaf or Userkaf.

He was likely the last pharaoh of the Fourth Dynasty of Egypt if he was not succeeded by a certain unknown ruler named Thamphthis as recorded in some Egyptian literature and, indirectly, by the Turin King List. No ruler named Thamphthis is recorded in contemporary documents such as royal monuments or private tombs in the Old Kingdom cemeteries of Giza and Saqqara, which date to this period.The long-lived palace courtier Netry-nesut-pu explicitly lists this sequence of Old Kingdom kings he served under in his tomb: Radjedef -> Khafre -> Menkaure ->Shepseskaf, and the first three 5th dynasty kings namely Userkaf, Sahure and Neferirkare.

Inside the Tomb of Shepseskaf is undecorated and large granite blocks make up the walls. The tomb looks like a huge sarcophagus from the outside. It was originally covered with a thin layer of limestone. 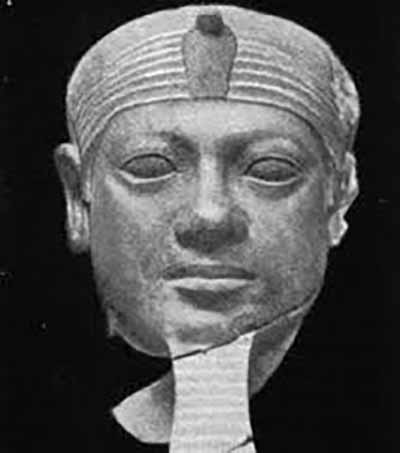