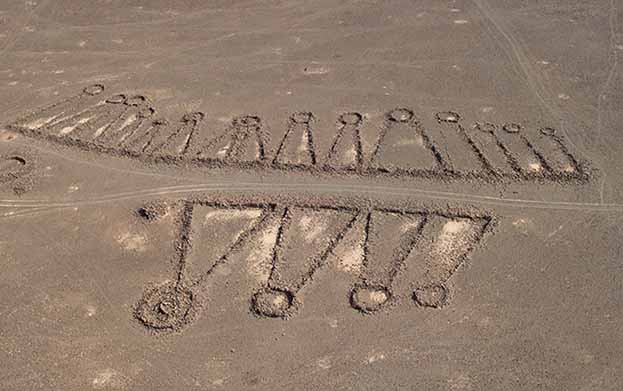 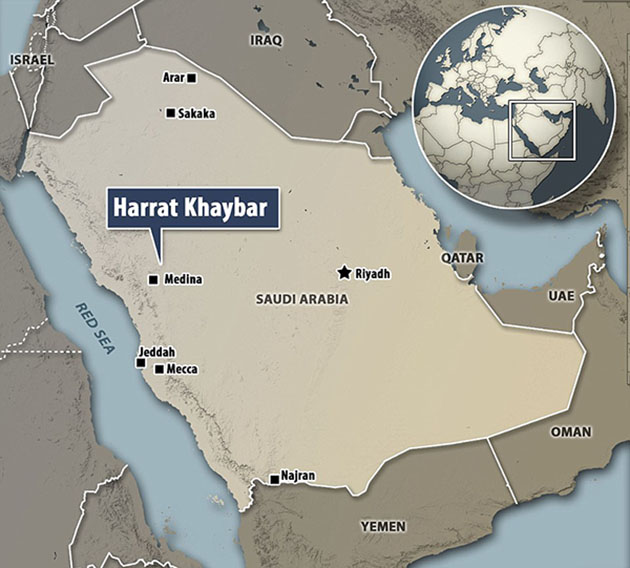 Saudi Arabia's 400 ancient 'gate' structures found on the edge of volcanoes are shown in stunning new detail, but archaeologists still have no idea why they were built   Daily Mail - November 13, 2017
Incredible images shot from the sky have provided a glimpse of some of the 400 mysterious stone structures located in a remote desert area in Saudi Arabia. Since the early 1950s, restrictions in the country have stymied further research of the baffling geometric shapes, which experts believe may be up to 7,000 years old. With the rise of satellite imagery and Google Earth, tantalizing new shots of the elusive earth works were revealed, affording new avenues for investigation. Now, a leading archaeologist has been granted special permission to fly over the desolate lava fields of the Harrat Khaybar region, providing the clearest pictures yet of the enigmatic formations.


Hundreds of thousands of stone structures that date back thousands of years and dot the deserts and plains of the Middle East and North Africa are, in many cases, so large that only a bird's-eye view can reveal their intricate archaeological secrets: gorgeous and mysterious geometric shapes resembling a range of objects, from field gates, to kites, to pendants, to wheels. These are the "Works of the Old Men," according to the Bedouin when first questioned in the 1920s. And although ancient peoples evidently had their reasons for constructing these stone structures, their purpose has remained relatively opaque to archaeologists today. I have been studying these Works for two decades, and their inaccessibility has made these sites' purposes even more elusive. That's where satellite imagery (used by Google Earth) and aerial reconnaissance, which involves much lower-flying aircraft) come in.

Between the last years of World War I and roughly the early 1950s, some aerial archaeology was carried out in the countries of the Middle East and North Africa (MENA) that were ruled or controlled by Britain and France. Most famously, these archaeologists included Antoine Poidebard in Syria, Sir Aurel Stein in Iraq and Transjordan, and Jean Baradez in Algeria. Then, it ended as these countries achieved independence, and except by Israel from time to time, no further aerial reconnaissance for archaeology was carried out, and access even to archival aerial photographs in every MENA country was rarely possible. For half a century, archaeologists working in this extensive region, with its rich heritage, had to do so without the benefit of the single most important tool for prospection, recording and monitoring, much less the valuable perspective the aerial view revealed.

That situation began to change in 1995, when President Bill Clinton ordered the declassification of old CIA satellite imagery. But things changed more rapidly about a decade ago, when the far superior Google Earth's (and, to a degree, Bing Maps') seamless photomap of the entire globe became available. Initially, there were few "windows" of high-resolution imagery displayed for any of these countries, but by 2008, there were enough for archaeologists to use regularly, and increasingly easily.

At a stroke, one strand of remote sensing was democratized: Anyone, anywhere with a computer and internet connection could traverse previously hidden landscapes on a photomap and see places perhaps long known to the local inhabitants but never formally defined and recorded in the databases of the national antiquities authorities. Into this space stepped a group of interested and talented amateurs for one of the countries for which aerial photographs had never been generally available: the 770,000 square miles (2 million square kilometers) of Saudi Arabia. Abdullah al-Sa'eed, a medical doctor, and colleagues of what they called The Desert Team, based in Riyadh, began to explore, via Google Earth, the huge lava field of western Saudi Arabia, called the Harret Khaybar. Then, they visited a variety of sites on the ground that they had discovered through the satellite imagery. In 2008 Dr al-Sa'eed.

Since al-Sa'eed and I published our findings about the stone structures of Harret Khaybar, I have published several articles on the archaeological remains in these lava fields of Arabia as a whole. There are immense numbers of them (at least hundreds of thousands), and each one can be huge (hundreds of metres across). Often, they are enigmatic, as there is no consensus on the purpose of several types of these structures. And they are almost entirely unrecorded and barely acknowledged; the extensive archaeological landscapes were first reported in the 1920s (for Jordan and Syria), but only now are they coming into sharp focus in terms of scale and significance.

Although these stone structures are found extensively in the northernmost harrat - the Harret al-Shaam, stretching from southern Syria across the Jordanian Panhandle and into Saudi Arabia - they appear in equally large numbers in most of the harrat stretching down the west coast of the Arabian Peninsula. It is those harrat in Saudi Arabia that have attracted much recent attention, in part because of their unfamiliarity and the astonishing numbers and types of sites that have emerged, some quite different from those long known in Jordan.

My own research on Saudi Arabia since 2009 has focused on a group of harrat in the northwest of the country, where I discovered a high-resolution "window" of pendants, wheels and cairns in the Harret Rahat, northeast of Jeddah; 917 kites in the Harret Khaybar; almost 400 gates, largely in the Harret Khaybar area; and a variety of site types found in various lava fields. All of these discoveries were made using the imagery of Google Earth (with occasional supplements from Bing Maps).

The number of high-resolution "windows" on Google Earth has increased rapidly, especially since the launch of the Landsat 8 satellite in February 2013. These virtual "windows" are marvelous tools for fulfilling the traditional roles of conventional aerial reconnaissance, which has led many to pose a question: Why do we need aerial reconnaissance now that we have free access to the satellite imagery of Google Earth?

Of course, Google Earth will remain a useful tool for prospection; it is simple to "pin" and catalog sites, measure them, sketch them and generate distribution maps for interpretation. The limitations are equally obvious, however. The imagery is two-dimensional, and even the best resolution can be very fuzzy when enlarged. Detail is missing, and some sites are effectively invisible for various reasons. And imagery may be months, or even years, old and thus less valuable for routine monitoring of development. 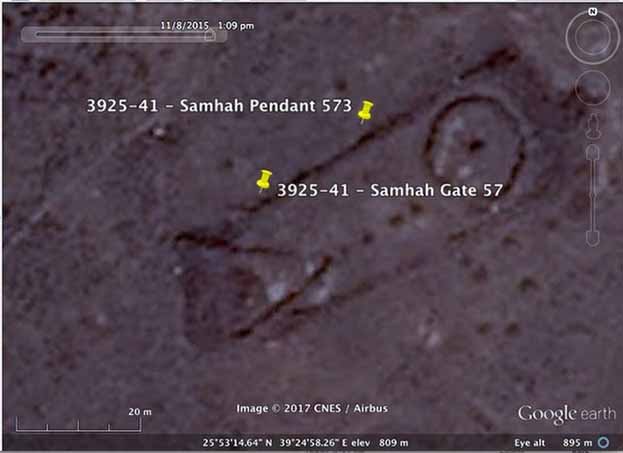 I never write about Saudi Arabia but as of late have mentioned internal political upheavals and their effect on the global picture. When I scrolled down the Wiki article, the Dilmun Civilization caught my attention with its references to ancient Sumer which takes us back to the beginning and how this biogenetic experiment came to be. Anunnaki The stone structures displaying pyramids with circles on top take me to the 1994 film Stargate when Daniel Jackson (James Spader) figured out how to open the stargate. 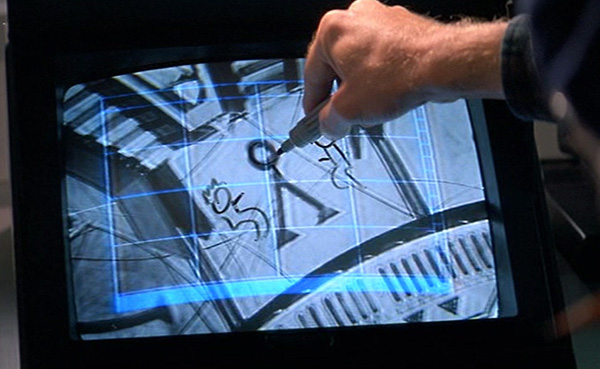 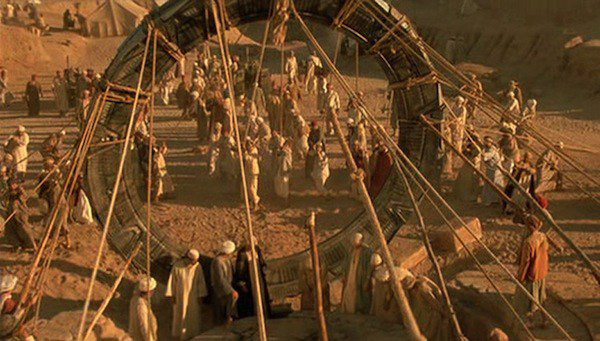