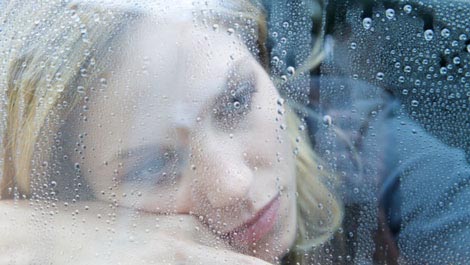 Seasonal affective disorder (SAD), also known as winter depression, winter blues, summer depression, summertime sadness, or seasonal depression, is a mood disorder subset in which people who have normal mental health throughout most of the year experience depressive symptoms in the winter or summer.

In the Diagnostic and Statistical Manual of Mental Disorders DSM-IV and DSM-5, its status was changed. It is no longer classified as a unique mood disorder but is now a specifier called with seasonal pattern for recurrent major depressive disorder that occurs at a specific time of the year and fully remits otherwise. Although experts were initially skeptical, this condition is now recognized as a common disorder. SAD's prevalence in the U.S. ranges from 1.4% in Florida to 9.9% in Alaska.

The U.S. National Library of Medicine notes that "some people experience a serious mood change when the seasons change. They may sleep too much, have little energy, and may also feel depressed. Though symptoms can be severe, they usually clear up." The condition in the summer can include heightened anxiety.

SAD was formally described and named in 1984 by Norman E. Rosenthal and colleagues at the National Institute of Mental Health. There are many treatments for classic (winter-based) seasonal affective disorder. Read more

We know the seasons affect your moods - SAD (Seasonal Affective Disorder) - but how about your cognitive skills?

Your Brain May Work Differently in Winter Than Summer   Live Science - February 9, 2016
The way your brain works may vary from season to season, a new study suggests. Researchers found that when people in the study did certain cognitive tasks, the ways that the brain utilizes its resources to complete those tasks changed with the seasons. Although people's actual performance on the cognitive tasks did not change with the seasons, "the brain activity for the ongoing process varied. Read the study ...


Light Therapy Is More Effective Than Prozac In Major Depression   Epoch Times - December 23, 2015
Bright light therapy has a proven track record of success in the treatment of seasonal affective disorder (SAD), commonly referred to as the winter blues. A new study from the University of British Columbia shows that this simple and safe therapy is effective for non-seasonal major depression. In fact, researchers showed light therapy was much more effective than fluoxetine (Prozac).


9 Sneaky Causes Of Depression   Huffington Post - November 12, 2015
For some people, sub-zero temperatures aren't the only difficult side effect of winter. Approximately 10 million Americans also experience seasonal affective disorder, a depression-related mental health condition that waxes and wanes depending on the time of year. 1. Chronic illness
2. Smoking
3. Excessive social media use
4. Your neighborhood
5. Diet
6. Too much sitting
7. A lack of sleep
8. Brain inflammation
9. Not putting your needs first

Autumn Anxiety Is Real, And Treatable   Huffington Post - September 14, 2015
Many of my friends who battle anxiety say the first few weeks of autumn are especially difficult for them. It happens every year. As I watch the first golden leaves fall from the oak tree outside our house and listen to the sound of the cicadas ushering in autumn, my anxiety spikes. I used to think I was relapsing into depression, but having been through this year after year, I now know I'm just going through my annual bout of autumn anxiety: a nervous feeling in my gut that begins the last week of August and continues through the first weeks of September.


Seeing the sunnier side of life: Scientists bring a whole new meaning to winter blues   Science Daily - August 5, 2015
Scientists at the University of York have shed new light on how humans process color -- revealing that we see things differently in winter compared with summer. The researchers examined how our color perception changes between seasons and in particular how we process the color known as unique yellow. Humans identify four unique hues -- blue, green, yellow and red -- that do not appear to contain mixtures of other colors.


People Get Seasonal Depression in the Summer, Too   Smithsonian - June 23, 2015
Millions suffer from SAD in summer as well as winter, and evidence hints that birth season plays a role in who develops the disorder. While seasonal affective disorder (SAD) is common during the short, cold days of winter, perhaps one in ten SAD sufferers experiences his or her depression during the summer months.