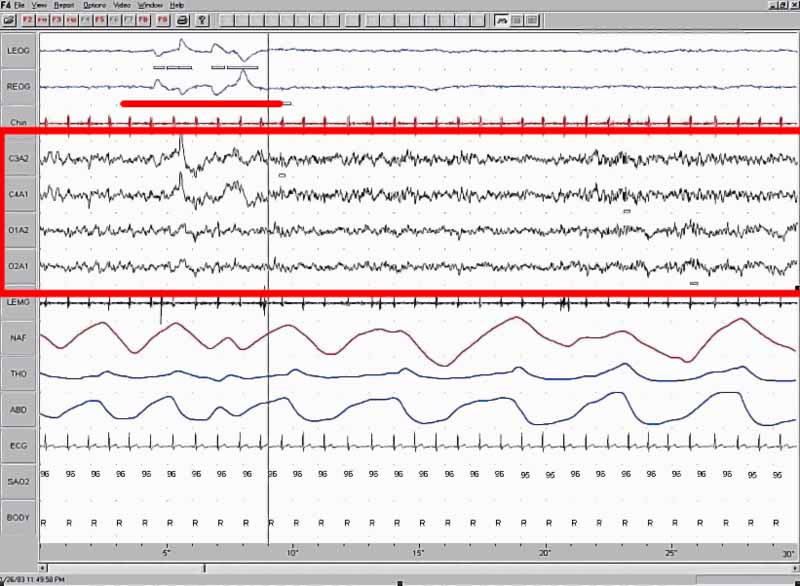 The brain is a computer that never stops working. It is forever processing information and learning based on one's DNA codes for experience as well as external and internal stimuli, and level of conscious awareness.

Dreaming - or focusing your consciousness in another part of the grids that comprise the illusion of this reality - has many levels in which the brain experiences faster as it is not confined to physical reality or consciousness. This may explain rapid eye movement when we dream.


Rapid eye movement sleep (REM sleep) is a normal stage of sleep characterized by the rapid and random movement of the eyes. REM sleep is classified into two categories: tonic and phasic. It was identified and defined by Nathaniel Kleitman, Eugene Aserinsky, and Jon Birtwell in the early 1950s. Criteria for REM sleep includes rapid eye movement, but also low muscle tone and a rapid, low-voltage EEG; these features are easily discernible in a polysomnogram, the sleep study typically done for patients with suspected sleep disorders.

REM sleep in adult humans typically occupies 20-25% of total sleep, about 90-120 minutes of a night's sleep. REM sleep normally occurs close to morning. During a normal night of sleep, humans usually experience about four or five periods of REM sleep; they are quite short at the beginning of the night and longer toward the end. Many animals and some people tend to wake, or experience a period of very light sleep, for a short time immediately after a bout of REM. The relative amount of REM sleep varies considerably with age. A newborn baby spends more than 80% of total sleep time in REM. During REM, the activity of the brain's neurons is quite similar to that during waking hours; for this reason, the REM-sleep stage may be called paradoxical sleep.

REM sleep is physiologically different from the other phases of sleep, which are collectively referred to as non-REM sleep (NREM sleep). Subjects' vividly recalled dreams mostly occur during REM sleep.

Physiologically, certain neurons in the brain stem, known as REM sleep-on cells, (located in the pontine tegmentum), are particularly active during REM sleep, and are probably responsible for its occurrence. The release of certain neurotransmitters, the monoamines (norepinephrine, serotonin and histamine), is completely shut down during REM.

This causescitation needed REM atonia, a state in which the motor neurons are not stimulated and thus the body's muscles do not move. Lack of such REM atonia causes REM behavior disorder; sufferers act out the movements occurring in their dreams. Heart rate and breathing rate are irregular during REM sleep, again similar to the waking hours.

Body temperature is not well regulated during REM. Erections of the penis (nocturnal penile tumescence or NPT) normally accompany REM sleep. If a male has erectile dysfunction (ED) while awake, but has NPT episodes during REM, it would suggest that the ED is from a psychological rather than a physiological cause. In females, erection of the clitoris (nocturnal clitoral tumescence or NCT) causes enlargement, with accompanying vaginal blood flow and transudation (i.e. lubrication). During a normal night of sleep the penis and clitoris may be erect for a total time of from one hour to as long as three and a half hours during REM.


According to one theory, certain memories are consolidated during REM sleep. Numerous studies have suggested that REM sleep is important for consolidation of procedural memory and spatial memory. (Slow-wave sleep, part of non-REM sleep, appears to be important for declarative memory.)

The role of REM sleep in memory, however, is not without its doubts. Monoamine oxidase (MAO) inhibitors and tricyclic antidepressants can suppress REM sleep, yet these drugs show no evidence of impairing memory. On the contrary, some studies show MAO inhibitors improve memory. Moreover, one case study of an individual who had little or no REM sleep due to a shrapnel injury to the brainstem did not find the individual's memory to be impaired.

Intimately related to views on REM function in memory consolidation, Mitchison and Crick have proposed that by virtue of its inherent spontaneous activity, the function of REM sleep "is to remove certain undesirable modes of interaction in networks of cells in the cerebral cortex", which process they characterize as "unlearning". As a result, those memories which are relevant (whose underlying neuronal substrate is strong enough to withstand such spontaneous, chaotic activation), are further strengthened, whilst weaker, transient, "noise" memory traces disintegrate.


According to another theory, known as the Ontogenetic Hypothesis of REM sleep, this sleep stage (also known as active sleep in neonates) is particularly important to the developing brain, possibly because it provides the neural stimulation that newborns need to form mature neural connections and for proper nervous system development.

Studies investigating the effects of active sleep deprivation have shown that deprivation early in life can result in behavioral problems, permanent sleep disruption, decreased brain mass, and result in an abnormal amount of neuronal cell death. Further supporting this theory is the fact that the amount of REM sleep in humans decreases with age, as well as data from other species.

One important theoretical consequence of the Ontogenetic Hypothesis is that REM sleep may have no essentially vital function in the mature brain, i.e., once the development of CNS has completed. However, because processes of neuronal plasticity do not cease altogether in the brain, REM sleep may continue to be implicated in neurogenesis in adults as a source of sustained spontaneous stimulation.

Yet another theory suggests that monoamine shutdown is required so that the monoamine receptors in the brain can recover to regain full sensitivity. Indeed, if REM sleep is repeatedly interrupted, the person will compensate for it with longer REM sleep, "rebound sleep", at the next opportunity.

It has been suggested that acute REM sleep deprivation can improve certain types of depression when depression appears to be related to an imbalance of certain neurotransmitters. Although sleep deprivation in general annoys most of the population, it has repeatedly been shown to alleviate depression, albeit temporarily.

More than half the individuals who experience this relief report it to be rendered ineffective after sleeping the following night. Thus, researchers have devised methods such as altering the sleep schedule for a span of days following a REM deprivation period and combining sleep-schedule alterations with pharmacotherapy to prolong this effect. Though most antidepressants selectively inhibit REM sleep due to their action on monoamines, this effect decreases after long-term use. It is interesting to note that REM sleep deprivation stimulates hippocampal neurogenesis much the same as antidepressants.

The sentinel hypothesis of REM sleep was put forward by Frederick Snyder in 1966. It is based upon the observation that REM sleep in several mammals (the rat, the hedgehog, the rabbit, and the rhesus monkey) is followed by a brief awakening. This does not occur for either cats or humans, although humans are more likely to wake from REM sleep than from NREM sleep. Snyder hypothesized that REM sleep activates an animal periodically, to scan the environment for possible predators. This hypothesis does not explain the muscle paralysis of REM sleep; however, a logical analysis might suggest that the muscle paralysis exists to prevent the animal from fully waking up unnecessarily, and allowing it to return easily to deeper sleep.

Sleep aids the process by which creativity forms associative elements into new combinations that are useful or meet some requirement. This occurs in REM sleep rather than in NREM sleep. Rather than being due to memory processes, this has been attributed to changes during REM sleep in cholinergic and noradrenergic neuromodulation.

Recently, scientists in the Cyclotron Research Centre at the University of Liege, in Liege, Belgium, and the Institut National de la Sante et de la Recherche Medicale at the Universite Pierre et Marie Curie in Paris, and the Functional Neuroimaging Unit at the Montreal Geriatrics Institute, investigated NREM sleep with the hypothesis that this phenomenon is associated with increased modularity of the brain's functional activity during these periods.

Using functional clustering - which estimates how integration is hierarchically organized within and across the constituent parts of a system they found that while in NREM sleep, hierarchically-organized large-scale neural networks were disaggregated into smaller independent modules. The researchers concluded that this difference could reduce the ability of the brain to integrate information, thereby accounting for the decreased consciousness experienced during NREM sleep.

Led by Pierre Maquet at the Cyclotron Research Centre and Habib Benali at the Institut National de la Sante et de la Recherche Medicale, the team faced a fundamental challenge in framing their research. Maquet first notes that there is currently no consensus on what consciousness really is, let alone how it arises.

"For many years,"he explains to Medical Xpress, "Giulio Tononi put forward the hypothesis that consciousness is related to the ability of the brain to integrate information. Our objective was simply to test this hypothesis, using novel tools allowing for the computation of information exchange within the brain and a set of EEG/fMRI data recorded in the same individuals during wakefulness and deep NREM sleep."The latter state, he adds, is arguably the condition associated with the most reduce conscious content in normal human volunteers.

Maquet notes that the team used methods devised by Benali. "These allow us to measure the hierarchical organization of integration - i.e., information. The data itself,"he continues, "were acquired in Liege. Conducting simultaneous EEG/fMRI recordings in sleeping volunteers is not that easy."Moreover, he notes, in practice, their findings are only one small step toward a better understanding of consciousness - and, for that matter, unconsciousness.

"The results were rather unexpected in that the amount of information exchanged in the brain actually increased during sleep. However, the patterns of exchange between regions were different than during wakefulness. Essentially, there was an increased information exchange within small clusters of mainly homologous brain areas whereas communication between clusters significantly decreased during sleep."Thus, he points out, the data support their hypothesis.

The team has already defined the next steps in their research, says Maquet, who acknowledges that fMRI suffers from a rather sluggish signal. "The next step is to apply the methods to EEG, which has a much better time resolution."He also states that it might it be possible to transition to in silico modeling, and that there are attempts in this direction in some laboratories.

A key advantage of the team's approach was relying on functional clustering rather than so-called total integration in neural network analysis. "This is a big question,"states Maquet. "We don't know what is the information exchanged within clusters, and I don't see any technique that could currently answer this question in humans. More generally,"he adds, "it is thought that NREM sleep is regulated by the homeostasis of synaptic strength, and perhaps by neuronal energy metabolism."These assumptions, he concludes, are being studied in animal models.