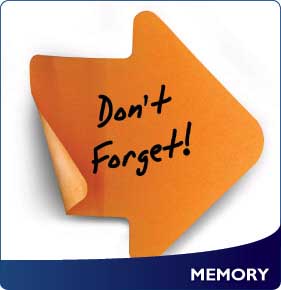 
Remembering to remember supported by two distinct brain processes   PhysOrg - August 19, 2013
You plan on shopping for groceries later and you tell yourself that you have to remember to take the grocery bags with you when you leave the house. Lo and behold, you reach the check-out counter and you realize you've forgotten the bags. Remembering to remember - whether it's grocery bags, appointments, or taking medications - is essential to our everyday lives. New research sheds light on two distinct brain processes that underlie this type of memory, known as prospective memory.

To investigate how prospective memory is processed in the brain, psychological scientist Mark McDaniel of Washington University in St. Louis and colleagues had participants lie in an fMRI scanner and asked them to press one of two buttons to indicate whether a word that popped up on a screen was a member of a designated category. In addition to this ongoing activity, participants were asked to try to remember to press a third button whenever a special target popped up. The task was designed to tap into participants' prospective memory, or their ability to remember to take certain actions in response to specific future events.

When McDaniel and colleagues analyzed the fMRI data, they observed that two distinct brain activation patterns emerged when participants made the correct button press for a special target.

When the special target was not relevant to the ongoing activity - such as a syllable like "tor" - participants seemed to rely on top-down brain processes supported by the prefrontal cortex. In order to answer correctly when the special syllable flashed up on the screen, the participants had to sustain their attention and monitor for the special syllable throughout the entire task. In the grocery bag scenario, this would be like remembering to bring the grocery bags by constantly reminding yourself that you can't forget them.

When the special target was integral to the ongoing activity - such as a whole word, like "table" - participants recruited a different set of brain regions, and they didn't show sustained activation in these regions. The findings suggest that remembering what to do when the special target was a whole word didn't require the same type of top-down monitoring. Instead, the target word seemed to act as an environmental cue that prompted participants to make the appropriate response - like reminding yourself to bring the grocery bags by leaving them near the front door. These findings suggest that people could make use of several different strategies to accomplish prospective memory tasks. McDaniel and colleagues are continuing their research on prospective memory, examining how this phenomenon might change with age.