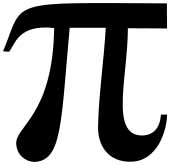 Pi is an irrational number, which means that its value cannot be expressed exactly as a fraction m/n, where m and n are integers. Consequently, its decimal representation never ends or repeats. It is also a transcendental number, which implies, among other things, that no finite sequence of algebraic operations on integers (powers, roots, sums, etc.) can be equal to its value; proving this was a late achievement in mathematical history and a significant result of 19th century German mathematics. Throughout the history of mathematics, there has been much effort to determine ą more accurately and to understand its nature; fascination with the number has even carried over into non-mathematical culture.

Probably because of the simplicity of its definition, the concept of ą has become entrenched in popular culture to a degree far greater than almost any other mathematical construct. It is, perhaps, the most common ground between mathematicians and non-mathematicians.Reports on the latest, most-precise calculation of Pi (and related stunts) are common news items. The current record for the decimal expansion of ą, if verified, stands at 5 trillion digits.

The Greek letter ą, often spelled out pi in text, was first adopted for the number as an abbreviation of the Greek word for perimeter (as an abbreviation for "perimeter/diameter") by William Jones in 1706. The constant is also known as Archimedes' Constant, after Archimedes of Syracuse, although this name is uncommon in modern English-speaking contexts. Pi - Read more


Pi calculated to a record-breaking 62.8 trillion digits   Live Science - October 8, 2021
Researchers in Switzerland are set to break the record for the most precise value of the mathematical constant pi, after using a supercomputer to calculate the famous number to its first 62.8 trillion decimal places.Pi is the ratio of a circle's circumference to its diameter. The name "pi" comes from the 16th letter in the Greek alphabet and has been used by mathematicians to represent the constant since the early 18th century. The first 10 digits of pi are 3.141592653, but the constant is what is known as an irrational number, meaning that it cannot be expressed as a common fraction and has an infinite number of decimal places.