The prehistory of Iran could be divided to Paleolithic, Epipaleolithic, Neolithic, and Chalcolithic periods:

One of the potential routes for early human migrations toward southern and eastern Asia is Iran, a country characterized by a wide range of geographic variation and resources, which could support early groups of hominins who wandered into the region. Evidence for the presence of these early populations in Iran includes sorne stone artifacts discovered From gravel deposits along the Kashafrud River Basin in eastern Iran, the Mashkid and Ladiz Rivers in the southeast, the Sefidrud River in the north, the Mahabad River in the northwest, and some surface occurrences and isolated finds From the west and northwestern parts of the country.

The main known early human occupation sites in Iran are: Kashafrud in Khorasan, Mashkid and Ladiz in Sistan, Shiwatoo in Kurdistan, Ganj Par in Gilan, Darband Cave in Gilan, Khaleseh in Zanjan, Gakia in Kermanshah, Pal Barik in Ilam. These sites fall between one million years ago to 200,000 years ago.

Mousterian Stone tools made by Neanderthal man have also been found in various parts of the country.There are more cultural remains of Neanderthal man dating back to the Middle Paleolithic period, which mainly have been found in the Zagros region and fewer in central Iran at sites such as Shanidar, Kobeh, Kunji, Bisetun, Qaleh Bozi, Tamtama, Warwasi. Evidence for Upper Paleolithic and Epipaleolithic periods are known mainly from the Zagros region in the caves of Kermanshah and Khoramabad such as Yafteh Cave and a few number of sites in the Alborz range and Central Iran.

The end of the Palaeolithic, called Epipalaeolithic,is in a period of about 7000 years from c. 18,000 to 11,000 BC. In those days groups of hunter-gatherers were mostly living in the caves of the Zagros Mountains. Compared to earlier groups of game hunters, a tendency towards increasing the number of the kinds of plants and animals, which were collected and hunted, can be observed. Not only smaller vertebrates were hunted but also pistachios and wild fruit were collected. Finally, consuming snails and smaller aquatic animals like crabs is new (Flannery 1973). 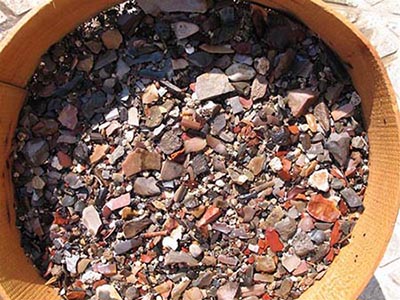 Stone tools and clay artifacts were collected from a site in the Zagros Mountains in Iran, where humans were cultivating plants 12,000 years ago. Among stone grinding tools, clay figures shaped like humans and animals and carved bone artifacts, archaeologists have harvested ancient grains from an early human settlement that are preserved 12,000 years. The finds suggest that generations of communities were earnestly experimenting with plant cultivation since the last Ice Age, and that agriculture, which laid the foundations for later civilizations, emerged concurrently in a number of locations that archaeologists recognize as the "Fertile Crescent" of the near east.

Little is known about the 2500 years which followed the Epipalaeolithic after 11,000 BC. Only when discovering the place of Asiab (c. 8500-8000) in the Kermanshah area we are in better known periods. Asiab was a small camp of hunter-gatherers, only seasonally inhabited. Besides the fact that wild goats and sheep were hunted, great numbers of snail shells were found. These finds were interpreted in the way that from time to time the hunting activities of the inhabitants of Asiab were unsuccessful and that then they were forced to consume food which they usually did not like.

Some nearby and more constantly occupied settlements in the Zagros date from a short time after Asiab, from the time between 8000 and 6800 BC. Still the material culture of Tappeh Ganj Dareh and Tappeh Abdul Hosein does not include any pottery. Thus this period is often called 'aceramic Neolithic'. This is also true for the oldest levels of Tappeh Guran, located in Luristan, as well as for the sites of Ali Kosh and Chogha Sefid in the plain of Deh Luran, west of the Zagros Mountains. There, flocks of sheep and herds of goats were kept for the first time. Managing animals meant a fundamentally new orientation of the Neolithic inhabitants of Iran and must be understood to be connected with a whole number of other innovations, particularly the architecture of houses. We do not definitely know if in those days there was any cultivation of cereals. Tools for harvesting and for making cereal products are there, but remnants of burned grain are extremely rare.

Dozens of pre-historic sites across the Iranian plateau point to the existence of ancient cultures and urban settlements in the fourth millennium BC, One of the earliest civilizations in Iranian plateau was the Jiroft Civilization in southeastern Iran, in the province of Kerman. It is one of the most artifact-rich archaeological sites in the Middle East. Archaeological excavations in Jiroft led to the discovery of several objects belonging to the fourth millennium BC, a time that goes beyond the age of civilization in Mesopotamia.

There is a large quantity of objects decorated with highly distinctive engravings of animals, mythological figures, and architectural motifs. The objects and their iconography are unlike anything ever seen before by archeologists. Many are made from chlorite, a gray-green soft stone; others are in copper, bronze, terracotta, and even lapis lazuli. Recent excavations at the sites have produced the world's earliest inscription which pre-dates Mesopotamian inscriptions.

There are records of numerous ancient civilizations on the Iranian plateau before the arrival of Iranian tribes from the Pontic-Caspian steppe during the Early Iron Age. One of the main civilizations of Iran was the Elam to the east of Mesopotamia, which started from around 3000 BC. The Jiroft culture occupied southeastern Iran and may have existed as far back as 3000 BC The Early Bronze Age saw the rise of urbanization into organized city states and the invention of writing (the Uruk period) in the Near East. While Bronze Age Elam made use of writing from an early time, the Proto-Elamite script remains undeciphered, and records from Sumer pertaining to Elam are scarce.

Records become more tangible with the rise of the Neo-Assyrian Empire and its records of incursions from the Iranian plateau. As early as the 20th century BC, tribes came to the Iranian Plateau from the Pontic-Caspian steppe .The arrival of Iranians on the Iranian plateau forced the Elamites to relinquish one area of their empire after another and to take refuge in Susiana, Khuzistan and nearby area, which only then became coterminous with Elam. By the mid first millennium BC, Medes, Persians, and Parthians populated the Iranian plateau.

Parthian Empire (247 BC - 224 AD), adopted both Hellenistic and Iranian customs