The Nerva-Antonine dynasty was a dynasty of seven Roman Emperors who ruled over the Roman Empire from 96 to 192. These Emperors are Nerva, Trajan, Hadrian, Antoninus Pius, Marcus Aurelius, Lucius Verus, and Commodus.

The first five of the six successions within this dynasty were notable in that the reigning Emperor adopted the candidate of his choice to be his successor. Under Roman law, an adoption established a bond legally as strong as that of kinship. Because of this, the second through sixth Nerva-Antonine emperors are also called Adoptive Emperors.

This has often been considered as a conscious repudiation of the principle of dynastic inheritance and has been deemed as one of the factors of the period's prosperity. However, this was not a new practice; Roman emperors had adopted heirs in the past: The Emperor Augustus had adopted Tiberius and the Emperor Claudius had adopted Nero.

The Imperator who appointed himself Dictator for Life, Gaius Julius Caesar, considered to be instrumental in the transition from Republic to Empire, adopted Octavian who would become Augustus, the first Emperor of Rome, even though he possibly had an illegitimate natural son Caesarion, by Cleopatra VII Philopator.

Moreover, there was a family connection as Trajan adopted his nephew Hadrian and Hadrian made Antoninus Pius adopt Hadrian's cousin Marcus Aurelius. The naming by Marcus Aurelius of his son Commodus was considered to be an unfortunate choice and the beginning of the Empire's decline.

The Antonines are four Roman Emperors who ruled between 138 and 192. In 138, after a long reign dedicated to the cultural unification and consolidation of the empire, the Emperor Hadrian named Antoninus Pius his son and heir, under the condition that he adopt both Marcus Aurelius and Lucius Verus. Hadrian died that same year, and Antoninus began a peaceful, benevolent reign. He adhered strictly to Roman traditions and institutions and shared his power with the Roman Senate. Marcus Aurelius succeeded Antoninus Pius in 161 upon that emperor's death and continued his legacy as an unpretentious and gifted administrator and leader. Lucius Verus ruled jointly with him until 169. Marcus Aurelius died in 180 and was followed by his biological son Commodus. 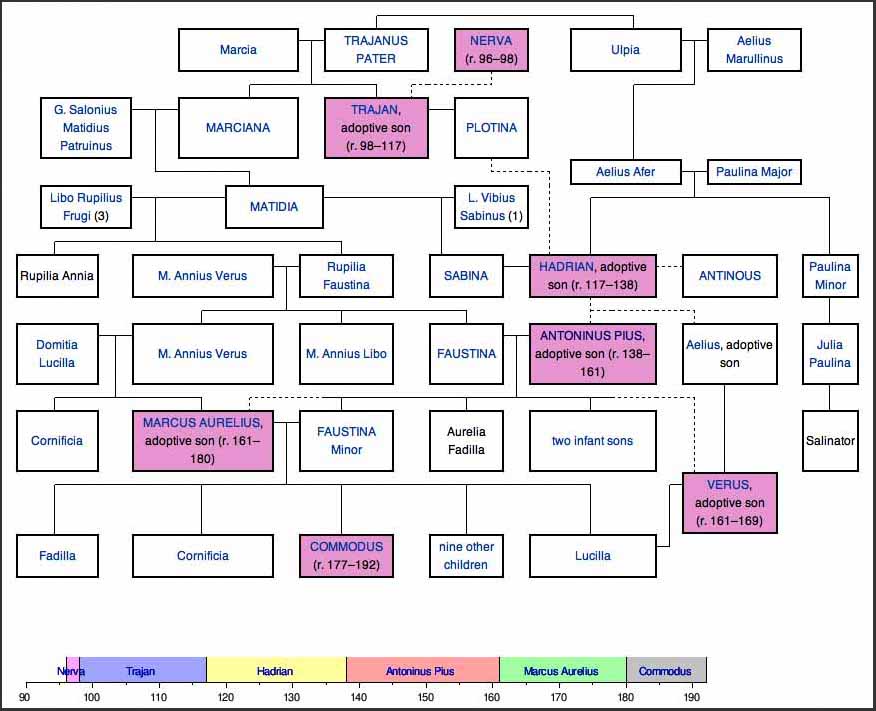