Tomb of Neferhotep I at Abydos 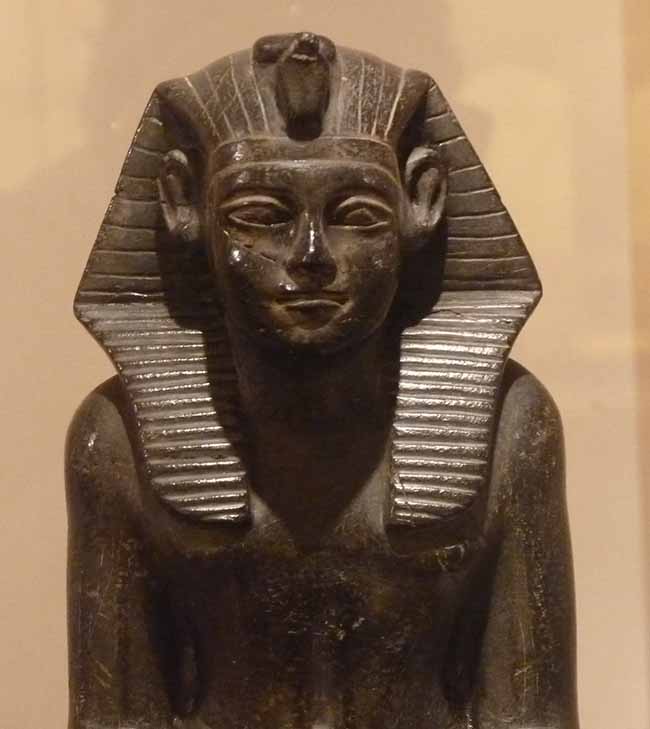 Khasekhemre Neferhotep I was an Egyptian pharaoh of the mid Thirteenth Dynasty ruling in the second half of the 18th century BC during a time referred to as the late Middle Kingdom or early Second Intermediate Period, depending on the scholar. One of the best attested rulers of the 13th Dynasty, Neferhotep I reigned for 11 years.

The grandson of a non-royal townsman from a Theban family with a military background, Neferhotep I's relation to his predecessor Sobekhotep III is unclear and he may have usurped the throne. Neferhotep I was likely contemporaneous with kings Zimri-Lim of Mari and Hammurabi of Babylon. Little is known of his activities during his decade-long reign and the most important document surviving from his rule is a stela from Abydos recounting the fashioning of an image of Osiris and Neferhotep's determination that it be made "as instructed by the gods at the beginning of time".

Towards the end of his reign, Neferhotep I shared the throne with his brother Sihathor, a coregency that lasted a few months to a year. Sihathor died shortly before Neferhotep, who probably then appointed another brother, Sobekhotep IV, as coregent. In any case, Sobekhotep IV succeeded Neferhotep I soon afterwards, and reigned over Egypt for almost a decade. The reigns of the two brothers mark the apex of the 13th Dynasty.

As of 2017, the tomb of Neferhotep I has not been formally identified, although a strong case now exists for it to be in Abydos.

Since 2013 a team of archaeologists from the University of Pennsylvania under the direction of Josef W. Wegner has been excavating a Late Middle Kingdom - Second Intermediate Period royal necropolis in Abydos, at the foot of a natural hill known to the ancient Egyptians as the Mountain of Anubis. The necropolis is located just next to the massive funerary complex of Senusret III of the 12th Dynasty and comprises two further large tombs, likely to have been pyramids built during the mid-13th Dynasty, as well as no less than eight royal tombs, possibly dating to the Abydos Dynasty.

One of the large tombs, which was extensively plundered of goods and stones during the Second Intermediate Period, known today as tomb S10, is now believed to belong to king Sobekhotep IV, Neferhotep's brother, on the basis of several finds showing Sobkehotep's name from the nearby royal tombs, such as that of Woseribre Senebkay. As a corollary, Wegner has suggested that the anonymous, large, neighboring tomb S9 could have belonged to Neferhotep I. Egyptologists have also noted that both kings were very active in the Abydos region during their reigns.

Older hypotheses concerning the location of Neferhotep's tomb included that proposed by Nicolas Grimal, that Neferhotep was buried in a pyramid at el-Lisht, close to that of Senusret I, an opinion shared by Michael Rice. This remains conjectural, as no artefact permitting the identification of Neferhotep as the owner of such a pyramid has been found. Grimal's hypothesis relies only on indirect evidence: the presence of scarabs of Neferhotep in Lisht as well as the discovery of a shawabti of a prince Wahneferhotep "(King) Neferhotep endures" close to the northern gateway of the mortuary temple of the pyramid complex of Senusret I.

The shawabti was wrapped in linen and placed in a miniature coffin, which is dated to the 13th Dynasty on stylistic grounds. This together with the name of Wahneferhotep and his title of "King's son" indicate that Wahneferhotep was likely a son of Neferhotep I, who may have been buried in the vicinity of his father's pyramid.

Alternatively, Dawn Landua-McCormack suggested that the Southern South Saqqara pyramid could have been a candidate for Neferhotep's burial site. This pyramid, datable to the middle 13th Dynasty, was provided with two elaborate sarcophagus chambers which might have been destined for two wealthy brother kings of the dynasty such as Neferhotep I and Sobekhotep IV.

The circumstances of Neferhotep's death after a reign of eleven years are unknown. His successor was his brother, Sobekhotep IV, who is perhaps the most important ruler of the 13th Dynasty.

Another brother, Sihathor, appears in the Turin canon as successor, but it seems that he only reigned for a few months as coregent with Neferhotep I and never became an independent ruler, likely because he predeceased his elder brother. After this, it is possible that Neferhotep I designated his younger brother Sobekhotep IV as coregent.

There are two inscriptions from Sehel showing Neferhotep I, Sihathor and Sobekhotep IV, which could mean that they reigned for some time together, although Sihathor is declared dead on both lists. Another piece of evidence is an inscription from the Wadi Hammamat showing the cartouches of Neferhotep I and Sobekhotep IV on par, next to each other. Some Egyptologists see this as evidence of a coregency between these two kings, while others, including Ryholt, reject this interpretation and believe the inscription was made by Sobekhotep to honor his deceased brother.