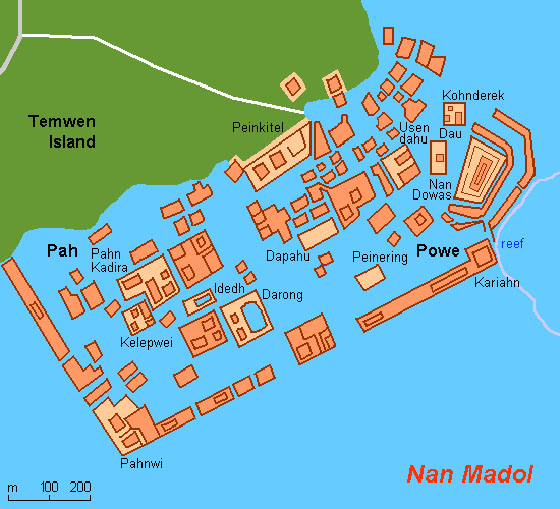 Nan Madol is an archaeological site adjacent to the eastern shore of the island of Pohnpei, now part of the Madolenihmw district of Pohnpei state in the Federated States of Micronesia in the western Pacific Ocean. Nan Madol was the capital of the Saudeleur Dynasty until about 1628. The city, constructed in a lagoon, consists of a series of small artificial islands linked by a network of canals. The site core with its stone walls encloses an area approximately 1.5 km long by 0.5 km wide and it contains nearly 100 artificial islets - stone and coral fill platforms - bordered by tidal canals. 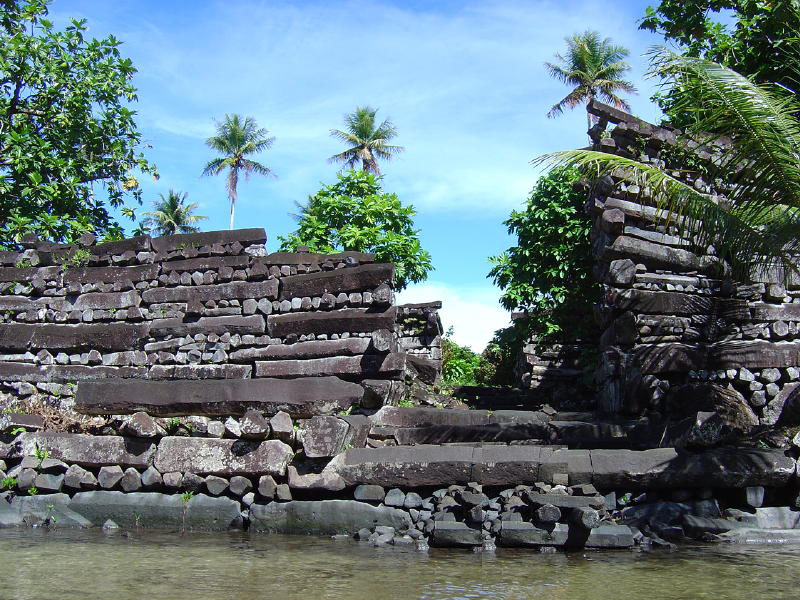 Ancient Alien theorists suggest some of the megalithic monuments were built by aliens in the past. 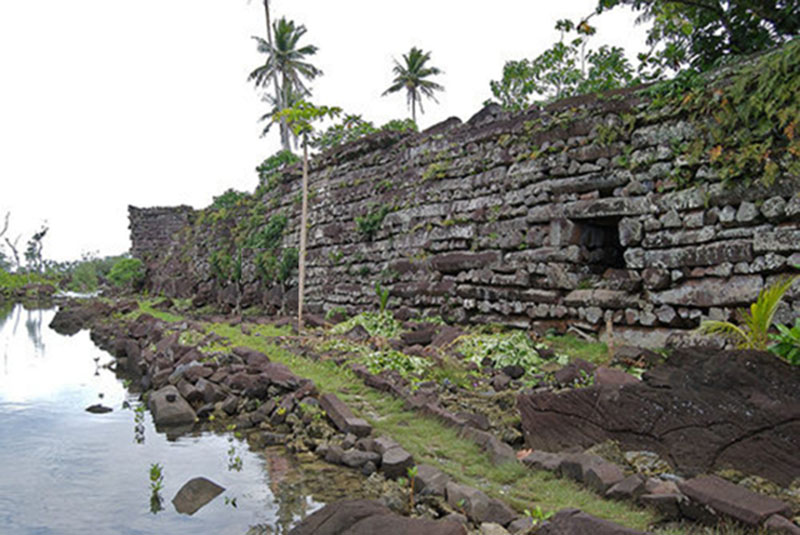 The name Nan Madol means "within the intervals" and is a reference to the canals that crisscross the ruins. The original name was Soun Nan-leng (Reef of Heaven), according to Gene Ashby in his book Pohnpei, An Island Argosy. The ruined city is one of today's great archaeological enigmas and is sometimes called "Atlantis," the "eighth wonder of the world," or the "Venice of the Pacific"

Nan Madol was the ceremonial and political seat of the Saudeleur Dynasty, which united Pohnpei's estimated 25,000 people until about 1628. Set apart between the main island of Pohnpei and Temwen Island, it was a scene of human activity as early as the first or second century AD. By the 8th or 9th century, islet construction had started, with construction of the distinctive megalithic architecture beginning 1180 -1200 AD.

Little can be verified about the megalithic construction. Pohnpeian tradition claims that the builders of the Leluh archaeological site on Kosrae (likewise composed of huge stone buildings) migrated to Pohnpei, where they used their skills and experience to build the even more impressive Nan Madol complex. Radiocarbon dating indicates that Nan Madol predates Leluh; thus, it is more likely that Nan Madol influenced Leluh.

According to Pohnpeian legend, Nan Madol was constructed by twin sorcerers Olisihpa and Olosohpa from the mythical Western Katau, or Kanamwayso. The brothers arrived in a large canoe seeking a place to build an altar so that they could worship Nahnisohn Sahpw, the god of agriculture. After several false starts, the two brothers successfully built an altar off Temwen Island, where they performed their rituals. In legend, these brothers levitated the huge stones with the aid of a flying dragon. When Olisihpa died of old age, Olosohpa became the first Saudeleur. Olosohpa married a local woman and sired twelve generations, producing sixteen other Saudeleur rulers of the Dipwilap ("Great") clan.

The founders of the dynasty ruled kindly, though their successors placed ever increasing demands on their subjects. Their reign ended with the invasion by Isokelekel, who also resided at Nan Madol, though his successors abandoned the site. Polish ethnographer and oceanographer John Stanislaw Kubary made the first detailed description of Nan Madol in 1874.


The elite centre was a special place of residence for the nobility and of mortuary activities presided over by priests. Its population almost certainly did not exceed 1,000, and may have been less than half that. Although many of the residents were chiefs, the majority were commoners. Nan Madol served, in part, as a way for the ruling Saudeleur chiefs to organize and control potential rivals by requiring them to live in the city rather than in their home districts, where their activities were difficult to monitor.

Madol Powe, the mortuary sector, contains 58 islets in the northeastern area of Nan Madol. Most islets were once occupied by the dwellings of priests. Some islets served a special purpose: food preparation, canoe construction on Dapahu, and coconut oil preparation on Peinering. High walls surrounding tombs are located on Peinkitel, Karian, and Lemenkou, but the most prominent is the royal mortuary islet of Nandauwas, where walls 5.5-7.5 m (18-25 ft) high surround a central tomb enclosure within the main courtyard. This was built for the first Saudeleur.

On Nan Madol, there is no fresh water or food; water must be collected and food grown inland. During Saudeleur rule, Pohnpeians brought essential food and water by boat. The Saudeleur received food at a particular islet - first Peiniot, and later the closer Usennamw.

Around 1628, when Isokelekel overthrew the Saudeleurs and began the Nahnmwarki Era, the Nahnmwarkis lived at Nan Madol, but had to gather their own water and grow their own food. This is thought[who?] to have caused them eventually to abandon Nan Madol and move back to their own districts, although there are other explanations for the desertion of the complex, such as a sharp population decline.

Carbon dating indicates that megalithic construction at Nan Madol began around 1180 AD when large basalt stones were taken from a volcanic plug on the opposite side of Pohnpei. The earliest settlement on Pohnpei was probably around 1 AD although radiocarbon dating only shows human activity starting around 80Đ200 AD.

In 1985. the ruins of Nan Madol were declared a National Historical Landmark. Currently, a greater effort is being made to preserve them.

In his book Lost City of Stones (1978), writer Bill S. Ballinger theorizes that the city was built by Greek sailors c. 300 BC. David Hatcher Childress, author and publisher, speculates that Nan Madol is connected to the lost continent of Lemuria.

The 1999 book The Coming Global Superstorm by Art Bell and Whitley Strieber, which predicts that global warming might produce sudden and catastrophic climatic effects, claims that the construction of Nan Madol, with exacting tolerances and extremely heavy basalt materials, necessitated a high degree of technical competency. Since no such society exists in the modern record this society must have been destroyed by dramatic means.