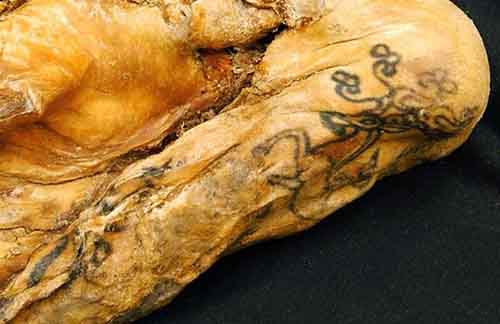 Tattoos have been found on mummies in all parts of the world. The placement of the tattoo can be on any part of the body and often speak of the life and tribe of the person mummified.

The most stunning example of ancient pictorial tattooing is the heavily tattooed Scythian chieftain, the "godfather of the Tribal Tattoo," discovered by Russian archeologists in Siberia near the Mongolian and Chinese borders in 1947. The mummy was unearthed from a kurgan burial mound at Pazyryk in the Altai Mountains and was dated to ca. 500 BC, though archaeologist James Mallory (author of In Search of the Indo-Europeans) believes he is more properly dated to about 300 BC.

The chieftain was preserved as an "ice-cube" because water leaked into the kurgan and froze immediately and permanently. His arms, shoulders and parts of his torso and one leg were covered with unique bold blackline tribal animal motifs. They have stylistic echoes of Persian, Assyrian, Indian art and particularly strong parallels in the Zhou (Chou) Dynasty and Warring States periods of Chinese art.

The Pazyrykis the name of an ancient nomadic people who lived in the Altai Mountains lying in Siberian Russia south of the modern city of Novosibirsk, near the borders of China, Kazakhstan and Mongolia.In this part of the Ukok Plateau, many ancient Bronze Age barrow-like tomb mounds of larch logs covered over by large cairns of boulders and stones have been found. These spectacular burials of the Pazyryk culture closely resemble those of the Scythian people to the west. The term kurgan, a word of Turkic origin, is generally used to describe such log-barrow burials. This archaeological site on the Ukok Plateau is included in the Golden Mountains of Altai UNESCO World Heritage Site. The Pazyryks were horse-riding pastoral nomads of the steppe and some may have accumulated great wealth through horse-trading with merchants in Persia, India and China.

The first tombs were excavated by the archaeologist Sergei Ivanovich Rudenko beginning in the 1920s. While many of the tombs had already been looted in earlier times, Rudenko unearthed buried horses, and with them immaculately preserved cloth saddles, felt and woolen rugs including the world's oldest pile carpet, a 3-metre-high four-wheel funeral chariot from the 5th century BC and other splendid objects that had escaped the ravages of time. These finds are now exhibited at the Hermitage Museum in St. Petersburg. 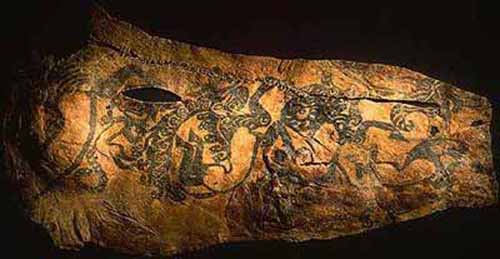 Rudenko's most striking discovery was the body of a tattooed Pazyryk chief: a thick-set, powerfully built man who had died when he was about 50. Parts of the body had deteriorated, but much of the tattooing was still clearly visible (see image). Subsequent investigation using reflected infrared photography revealed that all five bodies discovered in the Pazyryk kurgans were tattooed.

No instruments specifically designed for tattooing were found, but the Pazyryks had extremely fine needles with which they did miniature embroidery, and these were probably used for tattooing. The chief was elaborately decorated with an interlocking series of designs representing a variety of fantastic beasts. The best preserved tattoos were images of a donkey, a mountain ram, two highly stylized deer with long antlers and an imaginary carnivore on the right arm. Two monsters resembling griffins decorate the chest, and on the left arm are three partially obliterated images which seem to represent two deer and a mountain goat.

On the front of the right leg a fish extends from the foot to the knee. A monster crawls over the right foot, and on the inside of the shin is a series of four running rams which touch each other to form a single design. The left leg also bears tattoos, but these designs could not be clearly distinguished. In addition, the chief's back is tattooed with a series of small circles in line with the vertebral column. This tattooing was probably done for therapeutic reasons. Contemporary Siberian tribesmen still practice tattooing of this kind to relieve back pain.


2500 year old mummy has fantastic tattoos   NY Daily News - August 16, 2012
The mummy of a woman called the "Altai Princess" is in the museum of the Institute of Archaeology and Ethnography in Novosibirsk, Russia. Tattoos arenšt just a trendy way for people to express themselves - theyšre also apparently a time-honored tradition dating back almost three thousand years. A Siberian mummy, who researchers believe was buried 2500 years ago, will show off her intricate ink when she finally goes on display this month, and her shockingly well-preserved body art makes her look surprisingly modern. The mummified body of the young woman, believed to be between 25 and 28 years old, was found in 1993, researchers told The Siberian Times. Since then she has been kept frozen in a scientific institute, but she will soon be available to the public to be viewed from a glass case at the Republican National Museum in Siberiašs capital of Gorno-Altaisk. The woman, dubbed in the media as the Ukok ęprinces,ė was found wearing expensive clothing - a long silk shirt and beautifully decorated boots - as well as a horse hair wig. 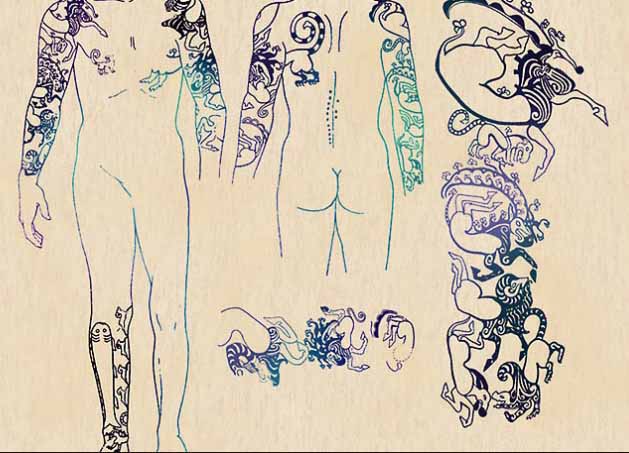 The ancient mummy of a mysterious young woman, known as the Ukok Princess, is finally returning home to the Altai Republic this month.


Mummy of Tattooed Woman Discovered in Peru Pyramid - National Geographic - May 16, 2006
An exquisitely preserved and elaborately tattooed mummy of a young woman has been discovered deep inside a mud-brick pyramid in northern Peru. The 1,500-year-old mummy may shed new light on the mysterious Moche culture, which occupied Peru's northern coastal valleys from about A.D. 100 to 800. In addition to the heavily tattooed body, the tomb yielded a rich array of funeral objects, from gold sewing needles and weaving tools to masterfully worked metal jewelry. Such a complete array has never been seen before in a Moche tomb. Surprisingly, the grave also contained numerous weapons, including two massive war clubs and 23 spear throwers. The unusual mix of ornamental and military artifacts has experts speculating about the woman's identity and her role in Moche society. The tomb lay near the top of a crumbling pyramid called Huaca Cao Viejo, a ruin near the town of Trujillo