The brain is a computer that runs on binary code. Computers are programmed differently as are humans and other sentient life forms. As with a computer, memory and storage capacity varies.

Memory is about focus which goes by many names such as: attention span, mindfulness, conscious awareness, recall, recapture, reflection ... It is influenced by learning disorders, emotional problems, and other factors. As you get older, your ability to multitask and focus diminishes, so doing a workaround helps get everything done efficiently.

In psychology, memory is an organism's ability to store, retain, and recall information and experiences. Traditional studies of memory began in the fields of philosophy, including techniques of artificially enhancing memory. The late nineteenth and early twentieth century put memory within the paradigms of cognitive psychology. In recent decades, it has become one of the principal pillars of a branch of science called cognitive neuroscience, an interdisciplinary link between cognitive psychology and neuroscience. 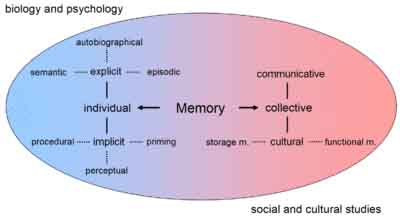 Memory is one of the activities of the human mind, much studied by cognitive psychology. It is the capacity to retain an impression of past experiences. There are multiple types of classifications for memory based on duration, nature and retrieval of perceived items.

The main stages in the formation and retrieval of memory, from an information processing perspective, are:

A basic and generally accepted classification (depending on the duration of memory retention and the amount of stored information during these stages) identifies three distinct types of memory: Sensory memory, short-term memory, and long-term memory. The first stage corresponds approximately to the initial moment that an item is perceived.

Some of this information in the sensory area proceeds to the sensory store, which is referred to as short-term memory. Sensory memory is characterized by the duration of memory retention from milliseconds to seconds and short-term memory from seconds to minutes. Once the information is stored, it can be retrieved in a period of time, which ranges from days to years and this type of memory is called long-term memory.

The sensory and short-term memory are bio-electrical types of memory, as they store information in form of electrical signals, whereas the long-term memory is a bio-chemical type of memory.

When we are given a seven digit number, we can remember it only for a few seconds and then forget (short term memory). On the other hand we remember our telephone numbers, since we have stored it in our brain after long periods of consolidation (long term memory).

The definition of working memory, which is erroneously used as a synonym of short-term memory, is based on not only the duration of memory retention but also the way how it is used in daily life activities. For instance, when we are asked to multiply 45 with 4 in our head, we have to perform a series of simple calculations (addition and multiplications) to give the final answer. The process of keeping in mind all this information for a short period of time is called working memory.

Another good example is a chess player, who is playing with multiple opponents at the same time and trying to remember the positions of pieces in all games and using this information to make a good move, when required. Long-term memory can further be classified as declarative (explicit) and procedural (implicit).

Explicit memory requires conscious recall, in other words the information must be called back consciously when it is required. If this information is about our own lives (what we ate for breakfast in this morning, our birth date etc.), it is called episodic memory, if it concerns our knowledge about the world (capital of France, presidents of US etc.), then it is called semantic memory.

Implicit memory is not based on the conscious recall of information stored in our brain, but on the habituation or sensitization of learned facts. We perform better in a given task each time we repeat the task, that is we use our implicit memory without necessarily remembering the previous experiences but using the previously learned behaviors unconsciously. For example, classical conditioning is one kind of implicit memory. Another example is memory resulting from motor learning, which depends upon the cerebellum and basal ganglia. Read more ...