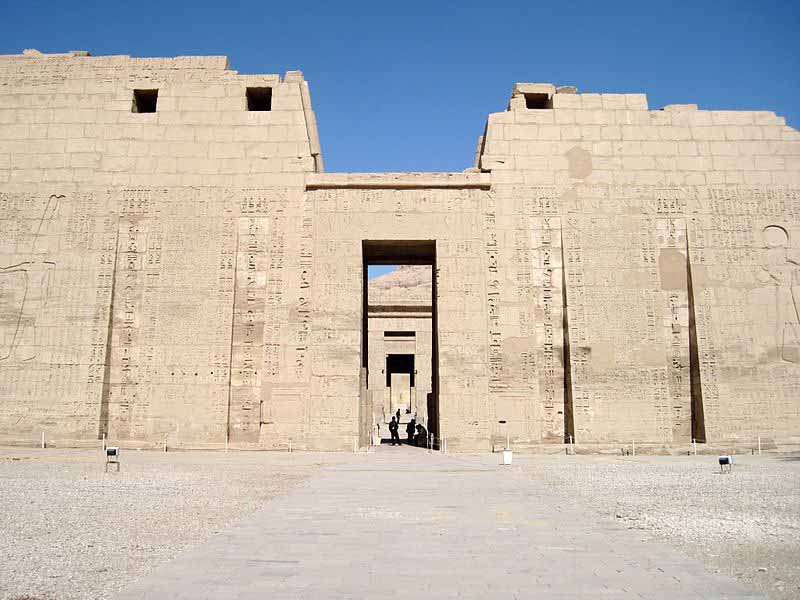 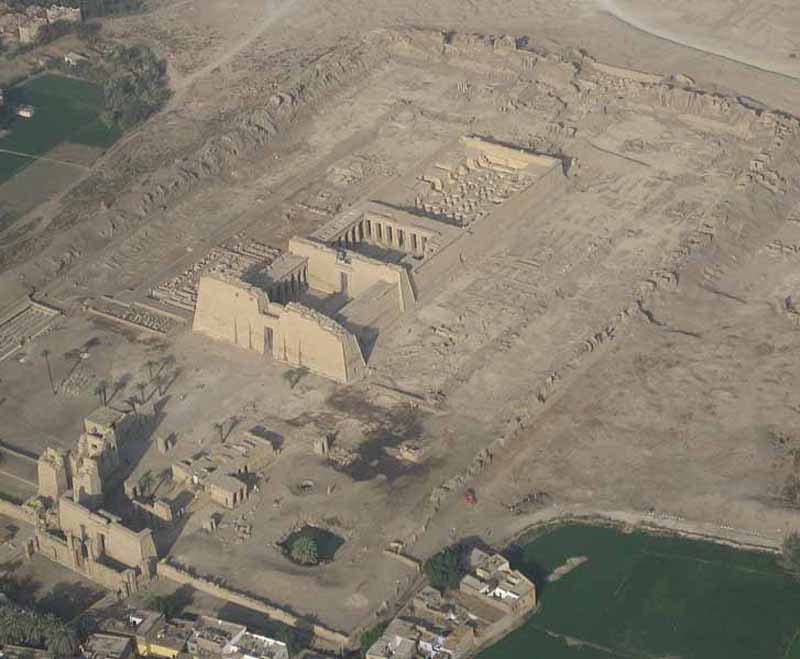 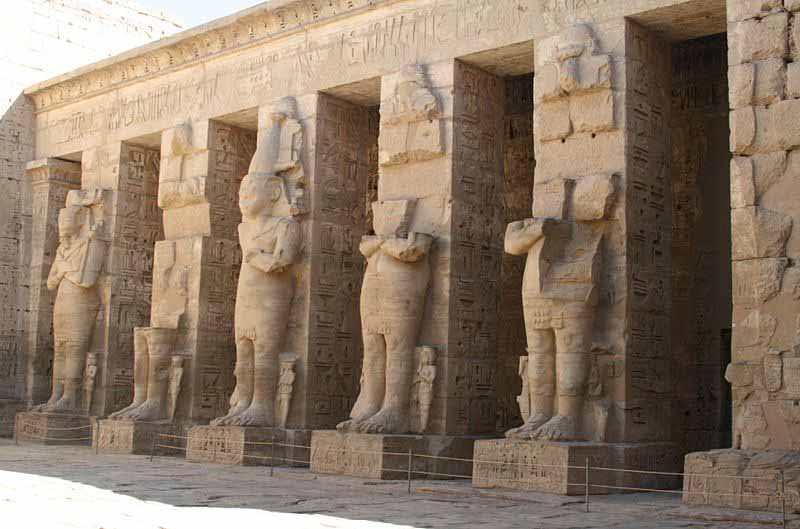 Ramessid columns in the peristyle court 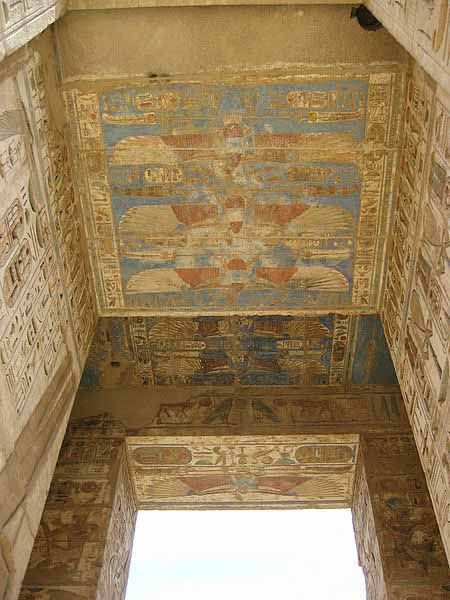 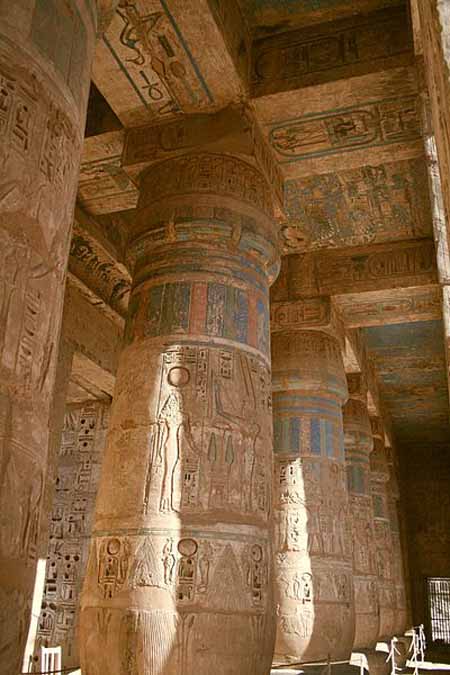 Ceiling decoration in the peristyle hall 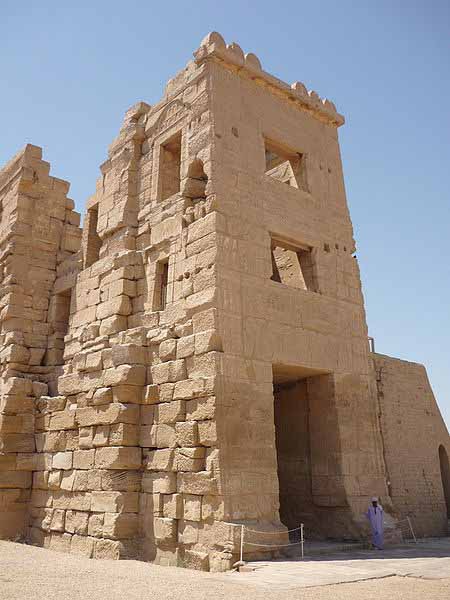 A view of the Migdol tower at Medinet Habu 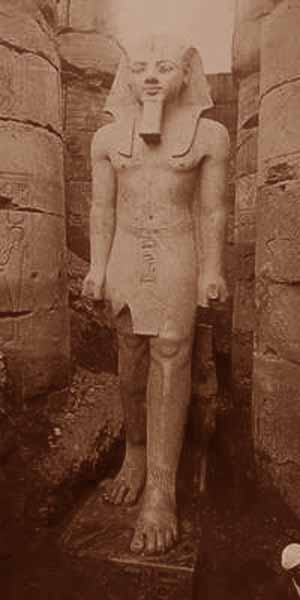 Medinet Habu is the name commonly given to the Mortuary Temple of Ramesses III, an important New Kingdom period structure in the location of the same name on the West Bank of Luxor in Egypt. Aside from its intrinsic size and architectural and artistic importance, the temple is probably best known as the source of inscribed reliefs depicting the advent and defeat of the Sea Peoples during the reign of Ramesses III.

The Sea Peoples, or Peoples of the Sea, were a confederacy of seafaring raiders of the second millennium BC who sailed into the eastern Mediterranean, caused political unrest, and attempted to enter or control Egyptian territory during the late 19th dynasty and especially during year 8 of Ramesses III of the 20th Dynasty. The Egyptian Pharaoh Merneptah explicitly refers to them by the term "the foreign-countries (or 'peoples') of the sea" in his Great Karnak Inscription.

The temple, some 150 m long, is of orthodox design, and resembles closely the nearby mortuary temple of Ramesses II (the Ramesseum). The temple precinct measures approximately 700 ft (210 m). by 1,000 ft (300 m) and contains more than 75,350 sq ft (7,000 m2) of decorated wall reliefs.[1] Its walls are relatively well preserved and it is surrounded by a massive mudbrick enclosure, which may have been fortified. The original entrance is through a fortified gate-house, known as a migdol (a common architectural feature of Asiatic fortresses of the time).

Just inside the enclosure, to the south, are chapels of Amenirdis I, Shepenupet II and Nitiqret, all of whom had the title of Divine Adoratrice of Amun.

The first pylon leads into an open courtyard, lined with colossal statues of Ramesses III as Osiris on one side, and uncarved columns on the other. The second pylon leads into a peristyle hall, again featuring columns in the shape of Ramesses. This leads up a ramp that leads (through a columned portico) to the third pylon and then into the large hypostyle hall (which has lost its roof). Reliefs and actual heads of foreign captives were also found placed within the temple perhaps in an attempt to symbolize the king's control over Syria and Nubia.

In Coptic times, there was a church inside the temple structure, which has since been removed. Some of the carvings in the main wall of the temple have been altered by coptic carvings.

The Royal Palace was directly connected with the first courtyard of the Temple via the "Window of Appearances".

Initial excavation of the temple took place sporadically between 1859 and 1899, under the auspices of the Egyptian Antiquities Service. During these decades the main temple was cleared, a large number of Coptic period buildings removed and the site made accessible to visitors. The further excavation, recording and conservation of the temple has been facilitated in chief part by the Architectural and Epigraphic Surveys of University of Chicago's Oriental Institute, almost continuously since 1924.