A NASA spacecraft captured a photo of a dune on the surface of Mars that looks suspiciously like the famous Starfleet logo from Star Trek. The Mars Reconnaissance Orbiter (MRO), snapped the photo on the Red Planet's southeast Hellas Planitia. The V-shaped symbol turned out to be a dune that is left over from the planet's lava and wind. The landmarks are called 'dune casts,' which record the presence of dunes that were surrounded by lava, according to the MRO's High Resolution Imaging Science Experiment, which is based at the University of Arizona in Tucson, Arizona. The landmark was created from crescent-shaped dunes, called 'barchan,' that moved across the area of the planet. After an eruption, the lava flowed around the dunes, causing the island-like landmarks to remain after the lava cooled. Eventually, the sand piles that were the dunes migrated away, leaving these footprints in the lava plain.


What do you see? 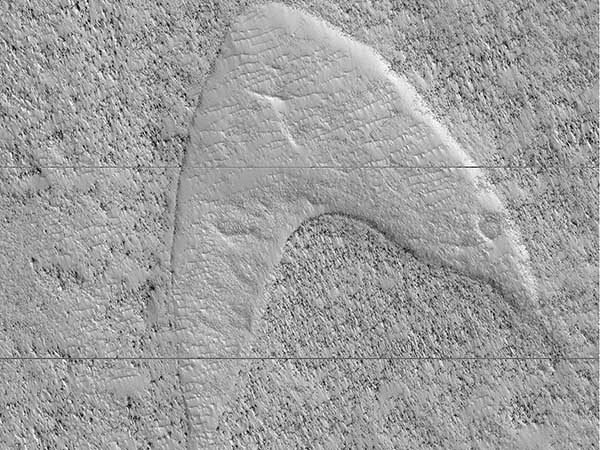 
To me it looks like the head of a long-necked bird feeding its baby or maybe a boomerang UFO.