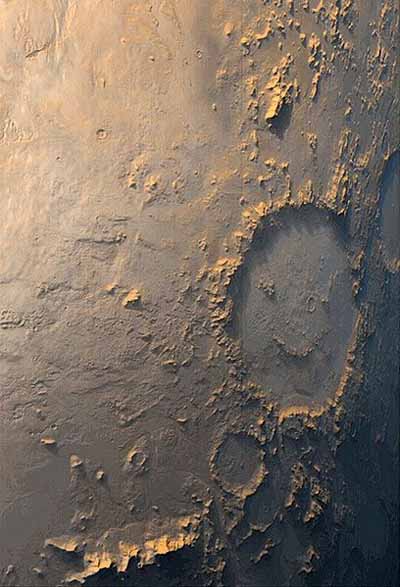 Galle is a crater on Mars. It is located on the eastern rim of the huge impact basin Argyre Planitia. It is named after the astronomer Johann Gottfried Galle.

Galle is often known as the "happy face crater" because the illusion of a smiley is created by a semicircular mountain range and two smaller craters within the main crater. The formation was first photographed by Viking Orbiter 1.

As the smiley is a key motif in the comic book Watchmen by Alan Moore and Dave Gibbons, the crater was used as a story location after the coincidence was noted by Gibbons. According to Gibbons, the similarity "was almost too good to be true. I worried that if we put it in, people would never believe it." The actual crater was visualized in the 2009 film adaptation of Watchmen.

A second "happy face crater", smaller than Galle and located at 45.1°S, 55.0°W in Nereidum Montes, was discovered by the Mars Reconnaissance Orbiter on January 28, 2008.


Happy Face on Mars Exposed   Space.com - April 12, 2006
With a few hills, some shadow, and a heavy dose of imagination, you can see a lot of things on Earth or in a space rock that are not there. In this realm of false sightings, Mars reigns. Mars has a heart, for one. And then there's the mile-long translucent worm. The most famous example is the Face on Mars, the one that some people believe to be the construct of an intelligent civilization.

Less controversial is the Happy Face on Mars, first noted in NASA's Viking Orbiter mission. Nobody seriously thinks it's actually something that's been built. New photos would lay to rest any wild ideas along these lines. From straight overhead, the Happy Face resembles that ubiquitous yellow smiling sticker. But seen in a new perspective view by the European Space Agency's Mars Express orbiter, the smile is wiped from the landscape, becoming nothing more than a line of mountains.

The smiling mountains sit within the Galle Crater, a hole in the ground dug by a space rock and whose rim forms the outline of the face. It is located on the eastern rim of the Argyre Planitia impact basin. Galle is 143 miles (230 km) wide.The new images were released today. Spotting things that don't exist - on Mars or in clouds - is called pareidolia. A study last year found that humans are particularly susceptible to seeing human faces where there are none, because our knowledge of the human face is so ingrained in our brains.