Scrying Objects on Mars - The Elephant 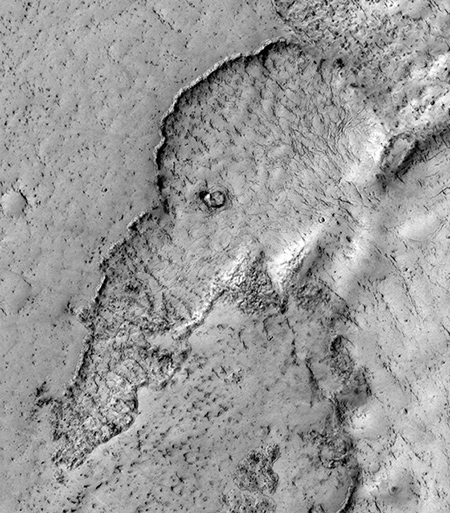 Today we find another image etched across the landscape of Mars ... an elephant. Does it hold any esoteric significance? I don't believe so, but it's pretty cool looking from above, much like the Nazca Lines of Peru.


Elephant on Mars Sculpted by Lava Flow   Live Science - April 9, 2012
The dried flood of lava over the surface of Mars has created the spitting image of the eye and trunk of an elephant. The curve of the animal's forehead and the dent of an ear also appear in a new photo taken by the High Resolution Imaging Science Experiment (HiRISE) on NASA's Mars Reconnaissance Orbiter. The Mars elephant illusion photo shows a region of the Red Planet called the Elysium Planitia, which is the youngest flood-lava province on Mars.

Scientists aren't sure if the lava flows on Mars were deposited quickly, or over a longer time period, as is the case on Earth, where most lava floods were put in place over years to decades.

"This is probably true for much of the lava on Mars as well," McEwen wrote. "An elephant can walk away from the slowly advancing flow front. However, there is also evidence for much more rapidly flowing lava on Mars, a true flood of lava. In this instance, maybe this elephant couldn't run away fast enough."

The Mars Reconnaissance Orbiter, which has been circling the Red Planet since 2006, was launched in 2005. The orbiter, currently in an extended phase of its mission, has transmitted more data to Earth than all other interplanetary missions combined, NASA officials have said.