The Julio-Claudian dynasty normally refers to the first five Roman Emperors: Augustus, Tiberius, Caligula (also known as Gaius), Claudius, and Nero, or the family to which they belonged; they ruled the Roman Empire from its formation, in the second half of the 1st century (44/31/27) BC, until AD 68, when the last of the line, Nero, committed suicide.

None of the Julio-Claudians were succeeded by their sons; only one of them had a legitimate son survive him. The ancient historical writers, chiefly Suetonius and Tacitus, write from the point of view of the Roman senatorial aristocracy, and portray the Emperors in generally negative terms, whether from preference for the Roman Republic or love of a good scandalous story.

No Julio-Claudian emperor was a blood descendant of his immediate predecessor. Although Tiberius and Claudius had male direct descendants (Tiberius Gemellus and Britannicus, respectively) available for the succession, their great-nephews (Caligula and Nero, respectively) were preferred.

The fact that ordinary father-son (or grandfather-grandson) succession did not occur has contributed to the image of the Julio-Claudian court presented in Robert Graves's I, Claudius, a dangerous world where scheming family members were all too ready to murder the direct heirs so as to bring themselves, their own immediate families, or their lovers closer to the succession.


Julius and Claudius were two Roman family names; in classical Latin, they came second. Such names are inherited from father to son; but a sonless Roman aristocrat quite commonly adopted an heir, who would also take the family name - this could be done in his will. Thus (Gaius) Julius Caesar adopted his sister's grandson, Gaius Octavius, who became a Julius, eventually named Imperator Caesar Augustus, normally called in English Augustus, the founder of the Empire. The next four emperors were closely related through a combination of blood relation, marriage and adoption.

Tiberius, the eldest son of Augustus' wife Livia by her first husband, was a Claudian by birth. He later became Augustus' son-in-law after marrying the emperor's only daughter, Julia the Elder. Tiberius, like Augustus before him, was adopted into the Julii upon becoming the emperor's heir apparent.

Caligula had both Julian and Claudian ancestry, making him the first actual "Julio-Claudian" emperor. Through his mother, Agrippina the Elder, Caligula was a great-grandson of Augustus. His father, Germanicus, was a scion of both Julii and Claudii, descending from the respective bloodlines of Octavia Minor and Livia Drusilla. After Tiberius' adoption by Augustus, Tiberius was required to adopt Germanicus, thus giving the Julius nomen to the members of Caligula's family.

Claudius was a Claudian through his father, Nero Claudius Drusus, and also possessed a blood connection to the Julian branch of the Imperial Family through his mother, Antonia Minor. After becoming emperor, Claudius added the cognomen Caesar to his full name.

Nero was a direct descendant of Augustus and Livia through his mother, Agrippina the Younger. The Julio-Claudian Dynasty collapsed after his reign ended through suicide.


Lacking any male child and heir Augustus married his only daughter Julia to his nephew Marcus Claudius Marcellus. However, Marcellus died of food poisoning in 23 BC. Augustus then married his widowed daughter to his loyal friend, Marcus Vipsanius Agrippa. This marriage produced five children, three sons and two daughters: Gaius Caesar, Lucius Caesar, Julia the Younger, Agrippina the Elder, and Postumus Agrippa.

Gaius and Lucius, the first two children of Julia and Agrippa, were adopted by Augustus and became heirs to the throne; however, Augustus also showed great favor toward his wife Livia's two children from her first marriage: Drusus and Tiberius. They were successful military leaders who had fought against the barbarian Germanic tribes.

Agrippa died in 12 BC, and Tiberius was ordered by Augustus to divorce his wife Vipsania Agrippina and marry his stepsister, the twice-widowed Julia. Drusus, the brother of Tiberius, died in 9 BC after falling from a horse. Tiberius shared in Augustus' tribune powers, but shortly thereafter, in 6 BC, he went into voluntary exile in Rhodes. After the early deaths of both Lucius (2 AD) and Gaius (4 AD), Augustus was forced to recognize Tiberius as the next Roman emperor. Augustus banished his grandson Postumus Agrippa to the small island of Planasia (around 6 or 7 AD), and Tiberius was recalled to Rome and officially adopted by Augustus.


On 19 August 14 AD, Augustus died. Tiberius had already been established as Princeps in all but name, and his position as heir was confirmed in Augustus' will.[citation needed]

Despite his difficult relationship with the Senate, Tiberius's first years were generally good. He stayed true to AugustusŐs plans for the succession and favored his adopted son Germanicus over his natural son, Drusus, as did the Roman populace. On Tiberius' request, Germanicus was granted proconsular power and assumed command in the prime military zone of Germania, where he suppressed the mutiny there and led the formerly restless legions on campaigns against Germanic tribes from 14 to 16 AD.

Germanicus died at Syria in 19 AD and, on his deathbed, accused the governor of Syria, Gnaeus Calpurnius Piso, of murdering him at TiberiusŐs orders. With Germanicus dead, Tiberius began elevating his own son Drusus to replace him as the Imperial successor. By this time Tiberius had left more of the day-to-day running of the Empire to Lucius Aelius Sejanus.

Sejanus created an atmosphere of fear in Rome, controlling a network of informers and spies whose incentive to accuse others of treason was a share in the accused's property after their conviction and death. Treason trials became commonplace; few members of the Roman aristocracy were safe. The trials played up to Tiberius' growing paranoia, which made him more reliant on Sejanus, as well as allowing Sejanus to eliminate potential rivals.

Tiberius, perhaps sensitive to this ambition, rejected Sejanus's initial proposal to marry Livilla in 25 AD, but later had withdrawn his objections so that, in 30 AD, Sejanus was betrothed to Livilla's daughter, Tiberius' granddaughter. Sejanus' family connection to the Imperial house was now imminent, and in 31 AD Sejanus held the Consulship with the emperor as his colleague, an honor Tiberius reserved only for heirs to the throne. When he was summoned to a meeting of the Senate later that year on 18 October 31 AD. he probably expected to receive a share of the tribunician power. Instead, however, Tiberius' letter to the Senate, completely unexpectedly, requested the destruction of Sejanus and his faction. A purge followed, in which Sejanus and his most prominent supporters were killed.


Although Augustus's succession plans were all but ruined due to the deaths of more than several family members, including many of his own descendants, in the end Tiberius remained faithful to his predecessor's wishes that the next emperor would hail from the Julian side of the Imperial Family. Thus, on the death of Tiberius, his adopted son, Gaius Julius Caesar Augustus Germanicus, ascended to the throne. Not only did the new Caesar belong to both the Julii and the Claudii, but he was also a direct descendant of Augustus Caesar as well. More commonly remembered in history by his childhood nickname Caligula, he was the third Roman Emperor ruling from 37 to 41 AD.

When Tiberius died on 16 March 37 AD, Caligula was well positioned to assume power, despite the obstacle of TiberiusŐs will, which named him and his cousin Tiberius Gemellus as joint heirs. Caligula ordered Gemellus killed within his first year. Backed by Naevius Sutorius Macro, Caligula asserted himself as sole princeps.

There were several unsuccessful attempts made on Caligula's life. The successful conspiracy that ended Caligula's life was hatched by the disgruntled Praetorian Guard with backing by the Senate. The historian Josephus claims that the conspirators wished to restore the Republic while the historian Suetonius claims their motivations were mostly personal. On 24 January 41, the praetorian tribune Cassius Chaerea and his men stopped Caligula alone in an underground passage leading to a theater. They stabbed him to death. Together with another tribune, Cornelius Sabinus, he killed Caligula's wife Caesonia and their infant daughter Julia Drusilla on the same day.


After CaligulaŐs death, the senate attempted and failed to restore the Republic. Claudius, Caligula's uncle, became emperor by the instigation of the Praetorian Guards.

Despite his lack of political experience, Claudius proved to be an able administrator and a great builder of public works. His reign saw an expansion of the empire, including the invasion of Britain in 43 AD. He took a personal interest in the law, presided at public trials, and issued up to twenty edicts a day; however, he was seen as vulnerable throughout his rule, particularly by the nobility. Claudius was constantly forced to shore up his position - resulting in the deaths of many senators.

Claudius also suffered tragic setbacks in his personal life. He married four times (in order to (1) Plautia Urgulanilla, (2) Aelia Paetina, (3) Valeria Messalina, and finally (4) Agrippina the Younger) and is referenced by Suetonius as being easily manipulated. This is particularly evident during his marriage to Agrippina the Younger, his niece.

Claudius' reign also included several attempts on his life. In order to gain political support, he married Agrippina and adopted his great-nephew Nero. With his adoption on 25 February 50 AD, Nero became heir to the throne. Claudius died on 13 October 54 AD, and Nero became emperor. A number of ancient historians accuse Agrippina of poisoning Claudius, but details on these private events vary widely.


Nero became emperor in 54 at seventeen, the youngest Emperor yet. Like his uncle Caligula before him, Nero was also a direct descendant of Augustus Caesar, a fact which made his ascension to the throne much easier and smoother than it had been for Tiberius or Claudius. Ancient historians describe Nero's early reign as being strongly influenced by his mother Agrippina, his tutor Seneca, and the Praetorian Prefect Burrus, especially in the first year. In 55, Nero began taking on a more active role as an administrator. He was consul four times between 55 and 60. Nero consolidated power over time through the execution and banishment of his rivals and slowly usurped authority from the Senate.

In 64 Rome burned. Nero enacted a public relief effort as well as large reconstruction projects. To fund this, the provinces were heavily taxed following the fire.

By 65, senators complained that they had no power left and this led to the Pisonian conspiracy. The conspiracy failed and its members were executed. Vacancies after the conspiracy allowed Nymphidius Sabinus to rise in the praetorian guard.

In late 67 or early 68, Vindex, the governor of Gallia Lugdunensis in Gaul, rebelled against the tax policies of Nero. Lucius Virginius Rufus, the governor of superior Germany was sent to put down the rebellion. To gain support, Vindex called on Galba, the governor of Hispania Citerior in Hispania (the Iberian Peninsula, comprising modern Spain and Portugal), to become emperor. Virginius Rufus defeated Vindex's forces and Vindex committed suicide. Galba was declared a public enemy and his legion was confined in the city of Clunia.

Nero had regained the control of the empire militarily, but this opportunity was used by his enemies in Rome. By June 68 the senate voted Galba the emperor and declared Nero a public enemy. The praetorian guard was bribed to betray Nero by Nymphidius Sabinus, who desired to become emperor himself.

Nero reportedly committed suicide with the help of his scribe Epaphroditos. With his death, the Julio-Claudian dynasty came to an end. Chaos ensued in the Year of the Four Emperors. 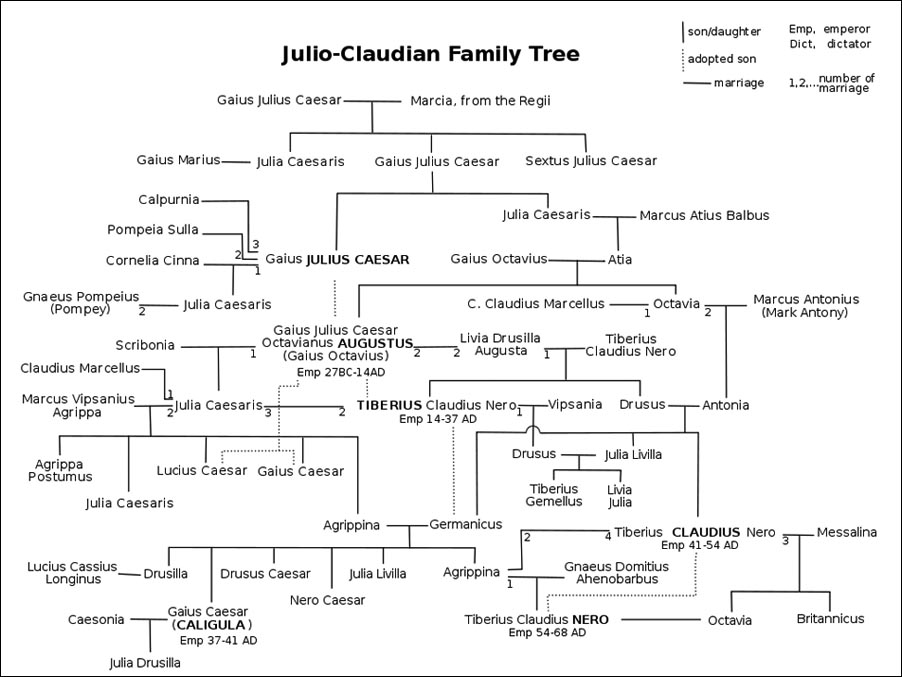