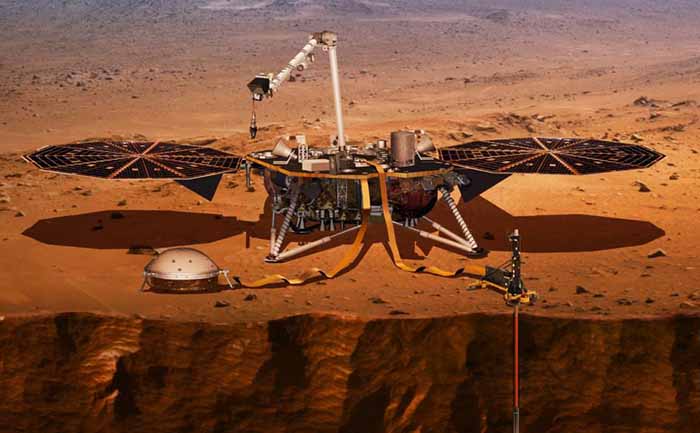 I watched the landing live on YouTube. Each landing makes me wonder why governments
still hide the truth about Mars, the Moon, and here on Earth, what lies beneath Antarctica.

NASA's InSight lander has touched down on Mars   CNN - November 26, 2018
After seven months of traveling through space, the NASA InSight mission has landed on Mars. A few minutes after landing, InSight sent the official "beep" to NASA to signal that it was alive and well, including a photo of the Martian surface where it landed.


Why Is NASA Looking for 'Marsquakes'?   Live Science - November 26, 2018
Scientists are keeping their fingers crossed for numerous quakes - marsquakes, that is. Today (Nov. 26), NASA's newest Mars exploration mission, called the Interior Exploration using Seismic Investigations, Geodesy and Heat Transport (InSight) mission, is scheduled to touch down on the surface of the Red Planet. With a design inspired by the older Mars lander Phoenix, this next-generation machine will extend its robot arms and place a seismometer - a device that measures quakes - onto the surface of Mars. If all goes well, for two Earth years (one Mars year), it will listen for vibrations that happen beneath the surface of the planet, to answer some fundamental questions about how rocky planets, including our own, formed.


A selfie on Mars: NASA's InSight spacecraft sends stunning image back to Earth after surviving a supersonic plunge and landing safely on the red planet   Daily Mail - November 27, 2018
NASA's latest interplanetary probe has sent its first selfie from the barren surface of Mars, after it successfully reached the planet following a seven month trip through space. The US space agency released a photograph taken by its Insight spacecraft shortly after it landed, showing part of the probe and the Martian surface in the distance. A Nasa satellite orbiting the red planet relayed images of the $1 billion (Ł0.78 billion) spacecraft from its landing site, known as Elysium Planitia, back to Earth at 8:30pm EST (1:30am GMT). The successful transfer confirms that InSight's solar panels, known as solar arrays, have now successfully opened, meaning it is able to collect sunlight and recharge its batteries each day.


Safely on Mars, InSight unfolds its arrays and snaps some pics   PhysOrg - November 30, 2018 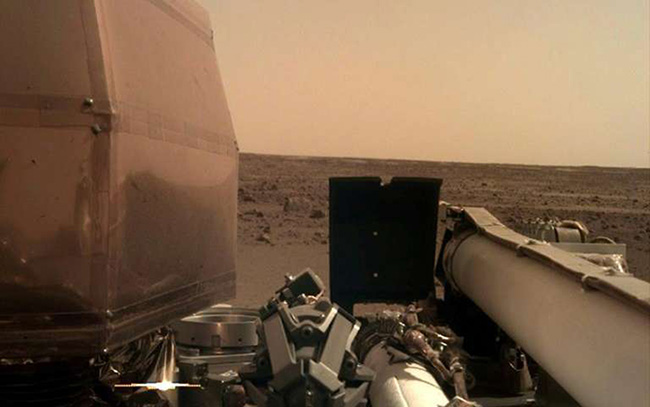 InSight is equipped with two full-color cameras and has already sent back six shots since touching down. The waist-high spacecraft will stay in place for the two-year duration of its mission. NASA has not said anything about the condition of the other instruments on board, which include a French-made seismometer to study Marsquakes and a German self-hammering mole to measure heat's escape from the planet.