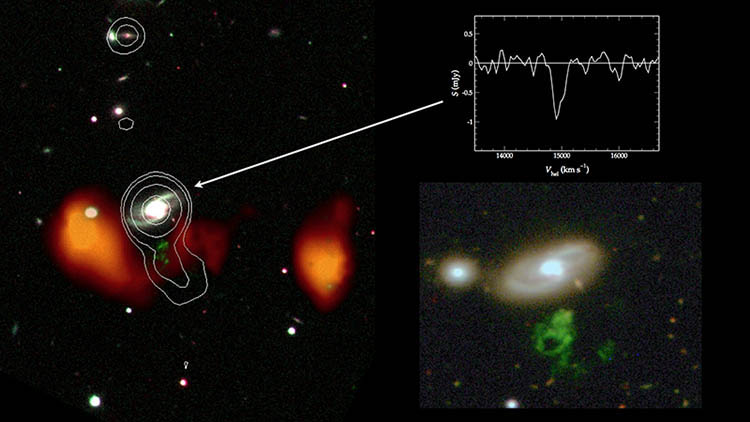 Hanny's Voorwerp is a very rare type of astronomical object called a quasar ionization echo. It was discovered in 2007 by Dutch school teacher Hanny van Arkel, while she was participating as a volunteer in the Galaxy Zoo project. Photographically, it appears as a bright blob close to spiral galaxy IC 2497 in the constellation Leo Minor.

One hypothesis suggests that HsV consists of remnants of a small galaxy showing the impact of radiation from a bright quasar event that occurred in the center of IC 2497 about 100,000 years before how it is observed today. The quasar event is thought to have stimulated the bright emission that characterizes HsV. The quasar might have switched off in the last 200,000 years and is not visible in the available images. This might well be due to a process known as AGN feedback. Read more


What is Hanny's Voorwerp?   NASA - June 25, 2008
What is that green thing? A volunteer sky enthusiast surfing through online Galaxy Zoo images has discovered something really strange. The mystery object is unusually green, not of any clear galaxy type, and situated below relatively normal looking spiral galaxy IC 2497. Dutch schoolteacher Hanny van Arkel, discovered the strange green "voorwerp" (Dutch for "object") last year. The Galaxy Zoo project encourages sky enthusiasts to browse through SDSS images and classify galaxy types. Now known popularly as Hanny's Voorwerp, subsequent observations have shown that the mysterious green blob has the same distance as neighboring galaxy IC 2497. Research is ongoing, but one leading hypothesis holds that Hanny's Voorwerp is a small galaxy that acts like a large reflection nebula, showing the reflected light of a bright quasar event that was visible in the center of IC 2497 about 100,000 years ago. Pictured above, Hanny's Voorwerp was imaged recently by the 2.5-meter Isaac Newton Telescope in the Canary Islands by Dan Smith, Peter Herbert and Chris Lintott (Univ. Hertfordshire). Other collaboration members include Matt Jarvis, Kevin Schawinski, and William Keel.