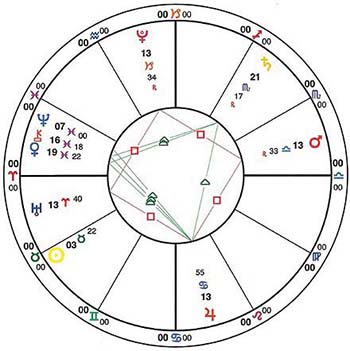 April 15th's lunar eclipse stirred the souls of many, bringing to the fore buried emotions that need to be addressed. Wednesday we find the Grand Cardinal Cross. That too will stir emotions that camouflage the truth - culminating on the new moon solar eclipse next week. Those with emotional problems and substance abuse issues will be enlightened.

Pluto's energy may be subtle, but its results will hit you like a ton of bricks. This planet is about transformation, regeneration and rebirth. Things aren't pretty with Pluto, but they do get done. Pluto says 'out with the old and in with the new,' and you'd better be ready for it. Pluto asks us to transcend that which we know, redeem ourselves in the process, and come out stronger as a result. For all that Pluto (re)creates (it also governs the reproductive system), it loves to destroy. This planet rules destruction, death, obsession, kidnapping, coercion, viruses and waste. That's definitely not pretty. Pluto also governs crime and the underworld, along with many forms of subversive activity (terrorism, dictatorships). This planet is about all that is secret and undercover, that which is hidden from view. Is this the story of good vs. evil? Yes. No one will deny Pluto's power (it rules atomic power, too) and intensity. This planet's energy is often focused on the masses and what the collective will do. Pluto beseeches the masses to look inward (and to their subconscious) to see what's there. It may be scary, but Pluto doesn't care. This planet knows how to push buttons ... so do I.

Today, April 21, 2014, marks the fifth exact Uranus-Pluto square in a series of seven stressful squares taking place from 2012-2015. This Grand Cross is the most powerful planetary pattern of the year. Each of these planets is in a pushy, Cardinal (season-starting) sign, too, so what we end up with is a Cardinal Grand Cross that can create chaos born from the need to make change happen RIGHT NOW! You'll feel this energy from April 20-23, 2014, but the affects will be life-changing and long-lasting.

April 2014 is the month of the long-anticipated Cardinal Grand Cross - the aspect pattern that's exact on April 23 forming for many decades, a hologram swirling in the seemingly random movements of the cosmos awaiting its moment of emergence. That is about to arrive with both deeply personal themes and vast global ones. They share a common thread, and that is trust. Read more ...

Since mid-February, Jupiter, Uranus and Pluto have moved even closer together. Like three people crowded into a cramped elevator or space, the closer they get, the more we feel their friction. The gift of squares is that they force us to deal. Whatever's been stuffed down or ignored will come up, and if you courageously confront it, your life could transform forever. You could think of it as an astrological juice cleanse. The detoxing part is no fun, but when it's over, you're glowing, light and free. The Grand Cross: A 4-Way Showdown