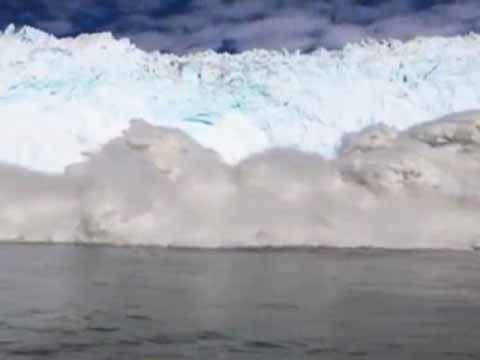 We tend to think of a tsunami occurring when a tectonic plate ruptures, but there are other events that can cause a tsunami - collapsing icebergs can cause them also. There's no doubt the climate has changed and the planet is warming up with huge glaciers falling off Greenland this year. Beside the fact they can collide into land areas - we find another threat - the glacial tsunami. This occurs with the capsizing of giant masses of ice that result from calving or splitting off from a glacier vary in shape and size. If their height is larger than their width, they can be unstable following break off and roll over, potentially creating a giant wave.

Iceberg capsizing poses the least-recognized practical hazard to humans of the tsunami-causing mechanisms related to calving of ice masses, the authors write in the paper. However, the energy released when icebergs roll over can be as large as that of an earthquake of magnitude 5-6, to quote Anders Levermann, from the Postdam Institute for Climate Impact Research in Germany, writing for Nature.

The energy estimate done by the authors of the Annals of Glaciology paper, researchers at the Chicago and Princeton Universities, is based on "a simplified, but not completely unrealistic, rectangular geometry," according to Levermann. Using this model shape, they calculate the potential energy (due to the EarthŐs gravity and water pressure) stored in the floating iceberg before and after roll over. The difference provides the energy released due to capsize, which can amount to the explosive energy of several thousands tons of TNT.

While some of it is dissipated through rocking motions and other processes, a significant proportion of the released energy can create a tsunami with a crest reaching up to one percent of the initial height of the iceberg. For an average floating ice mass from Antarctica, this corresponds to a 4-meter wave. But the tsunamis created by the tallest icebergs on Earth could be as high as 10 meters. These numbers are comparable to the open-ocean crest heights of the devastating tsunami in the Indian Ocean in 2006 and the recent event in Japan. While this damage is typically limited to icy areas with few inhabitants, tsunamis can travel large distances and eventually reach more populated regions. Given that most of GreenlandŐs and AntarcticaŐs ice loss, has accelerated over the last 20 years, due to calving, these tsunamis will be added to the list of future climate change threats.