Myrrh is a reddish-brown resinous material, the dried sap of a number of trees, but primarily from Commiphora myrrha, which is native to Yemen, Somalia, the eastern parts of Ethiopia, and Commiphora gileadensis, which is native to Jordan. The sap of a number of other Commiphora and Balsamodendron species is also known as myrrh, including that from Commiphora erythraea (sometimes called East Indian myrrh), Commiphora opobalsamum and Balsamodendron kua. Its name entered English via the Ancient Greek, which is probably of Somali or Arabic origin, where it is known as Murr. 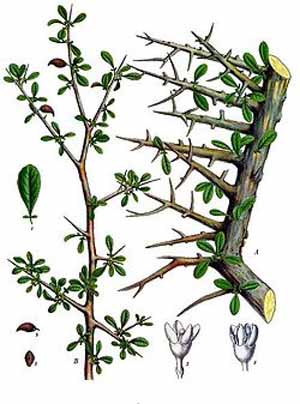 The name "myrrh" is also applied to the potherb Myrrhis odorata otherwise known as "Cicely" or "Sweet Cicely". High quality myrrh can be identified through the darkness and clarity of the resin. However, the best method of judging the resin's quality is by feeling the stickiness of freshly broken fragments directly to determine the fragrant-oil content of the myrrh resin. The scent of raw myrrh resin and its essential oil is sharp, pleasant, somewhat bitter and can be roughly described as being "stereotypically resinous". When burned, it produces a smoke that is heavy, bitter and somewhat phenolic in scent, which may be tinged with a slight vanilla sweetness. Unlike most other resins, myrrh expands and "blooms" when burned instead of melting or liquefying.

The scent can also be used in mixtures of incense, to provide an earthy element to the overall smell, and as an additive to wine, a practice alluded to by ancient authorities such as Fabius Dorsennus. It is also used in various perfumes, toothpastes, lotions, and other modern toiletries.

Myrrh was used as an embalming ointment and was used, up until about the 15th century, as a penitential incense in funerals and cremations. The "holy oil" traditionally used by the Eastern Orthodox Church for performing the sacraments of chrismation and unction is traditionally scented with myrrh, and receiving either of these sacraments is commonly referred to as "receiving the Myrrh".

The Ancient Egyptians imported large amounts of myrrh as far back as 3000 B.C. They used it to embalm the dead, as an antiseptic, and burned it for religious sacrifice.

In ancient history myrrh was used as a constituent of perfumes and incense, was highly valued in ancient times, and was often worth more than its weight in gold. The Greek word for myrrh, came to be synonymous with the word for "perfume". Today Myrrh is used for its antimicrobial properties.

In Ancient Rome myrrh was priced at five times as much as frankincense, though the latter was far more popular. Myrrh was burned in ancient Roman funerals to mask the smell emanating from charring corpses. It was said that the Roman Emperor Nero burned a year's worth of myrrh at the funeral of his wife, Poppaea. Pliny the Elder refers to myrrh as being one of the ingredients of perfumes, and specifically the "Royal Perfume" of the Parthians. He also says myrrh was used to fumigate wine jars before bottling.

Archeologists have found at least two ostraca from Malkata (from New Kingdom Egypt, ca. 1390 to 1350 B.C.) that were lined with a shiny black or dark brown deposit that analysis showed to be chemically closest to myrrh. The Romans were known to use myrrh as a premier additive to wine.

In Ancient Greece and Rome, a popular myth told the story of Myrrha, a young woman who was afflicted by the gods with an incestuous love of her father. Her old nurse helped her seduce him in darkness, and she fell pregnant. However, when her father learnt of her deception he was appalled and banished her. Taking pity on her, a god transformed her into a tree; hearing a child cry within the tree, some passersby delivered her baby Adonis, who was later the consort of Venus. The sap from which myrrh is derived is said to be the tears of the transformed Myrrha. This story of myrrh's origin is preserved in Ovid's Metamorphoses. 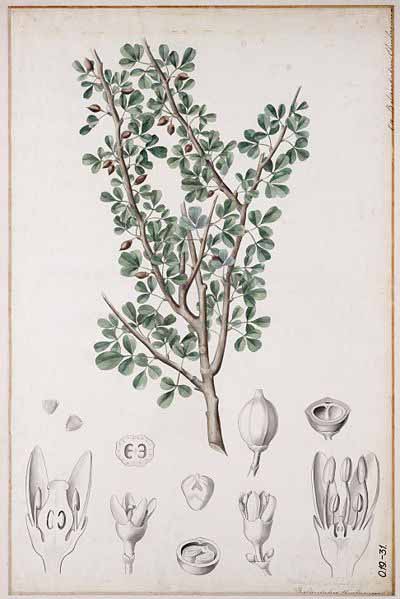 In Chinese medicine, myrrh is classified as bitter, spicy, neutral in temperature and affecting the heart, liver, and spleen meridians. Its uses are similar to those of frankincense, with which it is often combined in decoctions, liniments, and incense. When used in concert, myrrh is "blood-moving" while frankincense moves the Qi, making it more useful for arthritic conditions. Myrrh also has been used in the treatment of amenorrhea, dysmenorrhea, menopause, and uterine tumors, as its "blood-moving" properties can purge stagnant blood out of the uterus. Myrrh has also been recommended to help toothache pain, and can be used in liniment for bruises, aches and sprains.

Myrrh is most commonly used in Chinese medicine for rheumatic, arthritic, and circulatory problems. It is combined with such herbs as notoginseng, safflower stamens, Angelica sinensis, cinnamon, and Salvia miltiorrhiza, usually in alcohol, and used both internally and externally.

Myrrh is used more frequently in Ayurveda, Unani medicine, and Western herbalism, which ascribe to it tonic and rejuvenative properties. A related species, known as guggul in Ayurvedic medicine is considered one of the best substances for the treatment of circulatory problems, nervous system disorders and rheumatic complaints. Myrrh (Daindhava) is used in many rasayana formulas in Ayurveda.

However rasayana herbs have special processing. Outside of this form myrrh is said to be contraindicated for pregnant women or women with excessive uterine bleeding, and not be used with evidence of kidney dysfunction or stomach pain.

In pharmacy, myrrh is used as an antiseptic and is most often used in mouthwashes, gargles, and toothpastes for prevention and treatment of gum disease. Myrrh is currently used in some liniments and healing salves that may be applied to abrasions and other minor skin ailments. It is also used in the production of Fernet.

In an attempt to determine the cause of its effectiveness, researchers examined the individual ingredients of an herbal formula used traditionally by Kuwaiti diabetics to lower blood glucose. Myrrh and aloe gums effectively improved glucose tolerance in both normal and diabetic rats.

Myrrh was shown to produce analgesic effects on mice which were subjected to pain. Researchers at the University of Florence (Italy) showed that furanoeudesma-1,3-diene and another terpene in the myrrh affect opioid receptors in the mouse's brain which influence pain perception. 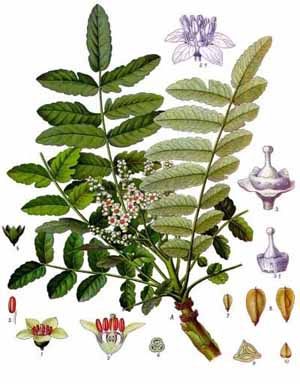 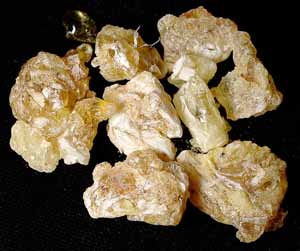 Frankincense has been traded on the Arabian Peninsula and in North Africa for more than 5000 years.

Frankincense was found in the tomb of the ancient Egyptian King Tutankhamen, who died in 1323 BC.

Frankincense was reintroduced to Europe by Frankish Crusaders. Although it is better known as "frankincense" to westerners, the resin is also known as olibanum, which is derived from the Arabic al-luban (roughly translated: "that which results from milking"), a reference to the milky sap tapped from the Boswellia tree. Some have also postulated that the name comes from the Arabic term for "Oil of Lebanon" since Lebanon was the place where the resin was sold and traded with Europeans. Compare with Exodus 30:34, where it is named levonah, meaning either "white" or "Lebanese" in Hebrew.

The lost city of Ubar, sometimes identified with Irem in what is now the town of Shisr in Oman, is believed to have been a centre of the frankincense trade along the recently rediscovered "Incense Road". Ubar was rediscovered in the early 1990s and is now under archaeological excavation.

The Greek historian Herodotus was familiar with Frankincense and knew it was harvested from trees in southern Arabia. He reports, however, that the gum was dangerous to harvest because of venomous snakes that lived in the trees. He goes on to describe the method used by the Arabians to get around this problem, that being the burning of the gum of the styrax tree whose smoke would drive the snakes away. The resin is also mentioned by Theophrastus and by Pliny the Elder in his Naturalis Historia.

Frankincense is used in perfumery and aromatherapy. Olibanum essential oil is obtained by steam distillation of the dry resin. Some of the smell of the olibanum smoke is due to the products of pyrolysis.

Frankincense was lavishly used in religious rites. In the Book of Exodus in the Old Testament, it was an ingredient for incense (Ex 30:34); according to the Gospel of Matthew 2:11, gold, frankincense, and myrrh were among the gifts to Jesus by the Biblical Magi "from out of the East." In this case, Frankincense was one of the gifts of the Magi. Tradition says that it was presented to the Christ Child by Balthasar, the black king from Ethiopia or Saba, thus fulfilling Isaiah's prophecy that gold and frankincense would be brought from the Gentiles to honor the heavenly king. Frankincense was the purest incense. 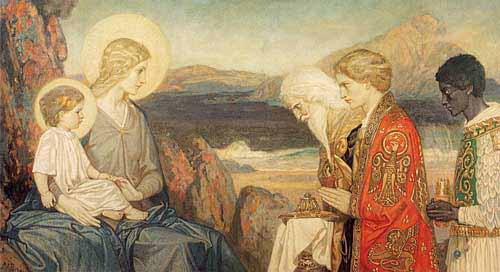 The Egyptians ground the charred resin into a powder called kohl. Kohl was used to make the distinctive black eyeliner seen on so many figures in Egyptian art. The aroma of frankincense is said to represent life and the Judaic, Christian, and Islamic faiths have often used frankincense mixed with oils to anoint newborn infants and individuals considered to be moving into a new phase in their spiritual lives.

The growth of Christianity depressed the market for frankincense during the 4th century AD. Desertification made the caravan routes across the Rub al Khali or "Empty Quarter" of Arabia more difficult. Additionally, increased raiding by the nomadic Parthians in the Near East caused the frankincense trade to dry up after about 300 AD.

Frankincense is edible and often used in various traditional medicines in Asia for digestion and healthy skin. Edible frankincense must be pure for internal consumption, meaning it should be translucent, with no black or brown impurities. It is often light yellow with a (very) slight greenish tint. It is often chewed like gum, but it is stickier because it is a resin.

In Ayurvedic medicine Indian frankincense (Boswellia serrata) has been used for hundreds of years for treating arthritis.

Olibanum is characterized by a balsamic-spicy, slightly lemon, and typical fragrance of incense, with a slightly conifer-like undertone. It is used in the perfume as well as cosmetics and pharmaceuticals industries.