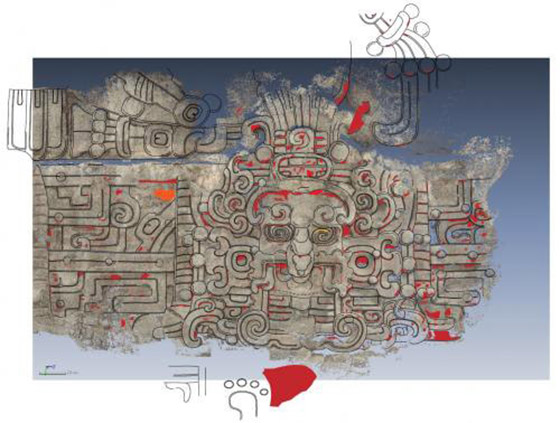 A team of archaeologists led by Brown University's Stephen Houston has uncovered a pyramid, part of the Maya archaeological site at El Zotz, Guatemala. The ornately decorated structure is topped by a temple covered in a series of 5 foot high masks depicting different phases of the sun, as well as deeply modeled and vibrantly painted stucco throughout. The team began uncovering the temple, called the Temple of the Night Sun, in 2009. Dating to about 350 to 400 A.D., the temple sits just behind the previously discovered royal tomb, atop the Diablo Pyramid. The structure was likely built after the tomb to venerate the leader buried there. 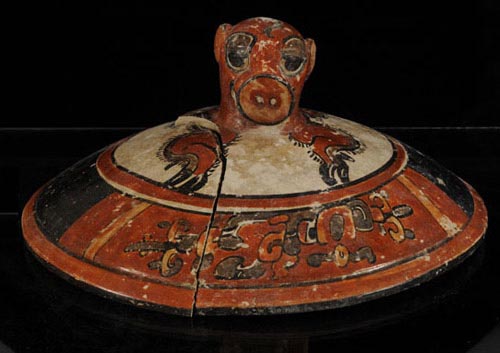 July 19, 2010: Archaeologists excavating in the Guatamalan jungle have discovered a royal tomb, filled with colorful 1,600-year-old Mayan artifacts, beneath the El Diablo pyramid. The well preserved tomb is packed with carvings, ceramics, textiles, and the bones of six children, possibly the remains of a human sacrifice. The tomb itself is about 6 feet high, 12 feet long, and four feet wide. The ancient Maya kingdom of El Zotz is located within a day's walk (about 20kms) from Tikal, the capital of one of the largest and most powerful kingdoms of the ancient Maya. Yet, El Zotz flourished in the midst of the 1st millennium AD - after Tikal was defeated by Caracol (Belize) and Calakmul (Mexico). It is likely that El Zotz allied with Tikal's enemies and that relations between the two cities were hostile. According to a text found at Tikal, in the 8th century AD, El Zotz was engaged in battle against Tikal, and the last known hieroglyphic inscription to refer to El Zotz describes the city as being the target of an attack by Tikal.