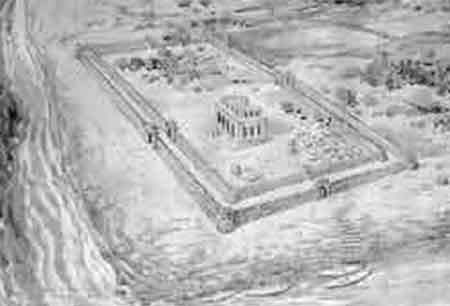 The Ruins of Gulf of Khambhat and Dwarka 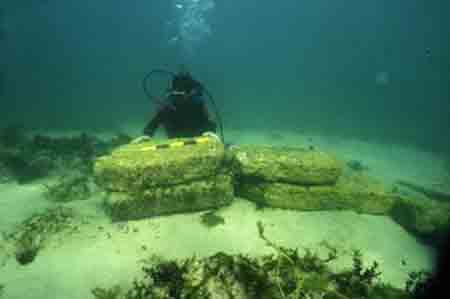 The Gulf of Khambhat (formerly known as the Gulf of Cambay) is an inlet of the Arabian Sea along the west coast of India, in the state of Gujarat. It is about 80 miles in length, and divides the Kathiawar peninsula to the west from the eastern part of Gujarat state on the east. The Narmada and Tapti rivers empty into the Gulf.


Marine archeology in the Gulf of Cambay - now known as the Gulf of Khambhat - centers around controversial findings made in December 2000 by the National Institute of Ocean Technology (NIOT). The structures and artifacts discovered by NIOT are the subject of contention. The major disputes surrounding the Gulf of Khambhat Cultural Complex (GKCC) are claims about the existence of submerged city-like structures, the difficulty associating dated artifacts with the site itself, and disputes about whether stone artifacts recovered at the site are actually geofacts.

One major complaint is that artifacts at the site were recovered by dredging, instead of being recovered during a controlled archeological excavation. This leads archeologists to claim that these artifacts cannot be definitively tied to the site. Because of this problem, prominent archeologists reject a piece of wood that was recovered by dredging and dated to 7500 B.C. as having any significance in dating the site. Another major issue is that no marine archeologist has actually inspected the site. All current research has been based on controversial sonar scans, and artifacts dredged from the sea bed.

In May 2001, India's Union Minister for Human Resource Development, Science and Technology division, Murli Manohar Joshi, announced that the ruins of an ancient civilization had been discovered off the coast of Gujarat, in the Gulf of Khambhat. The site was discovered by NIOT while they performed routine pollution studies using sonar, and was described as an area of regularly spaced geometric structures. It is located 20 km from the Gujarat coast, spans 9 km, and can be found at a depth of 30-40 meters. In his announcement, Joshi represented the site as an urban settlement that predates Indus Valley Civilization. Further descriptions of the site by Joshi describe it as containing regularly spaced dwellings, a granary, a bath, a citadel, and a drainage system.

A follow-up investigation was conducted by NIOT in November 2001, which included dredging to recover artifacts and sonar scans to detect structures. Among the artifacts recovered were a piece of wood, pottery sherds, weathered stones initially described as hand tools, fossilized bones, and a tooth. Artifacts were sent to the National Geophysical Research Institute (NGRI) in Hyderabad, India, the Birbal Sahni Institute of Paleobotany (BSIP) in Lucknow, Germany, and the Physical Research Laboratory in Ahmedabad, India. The piece of wood was carbon dated to an age of 9,500 years old.

NIOT returned for further investigation in the Gulf from October 2002 to January 2003. During these excavations, NIOT reported finding two paleochannels flanked by rectangular and square basement-like features. Artifacts were recovered by means of dredging, including pottery sherds, microliths, wattle and daub remains, and hearth materials. These artifacts were sent for dating at the laboratories of Manipur University and Oxford University. The wattle and daub remains are composed of locally available clay, reed, husk, pottery pieces, and pieces of fresh water shell. The wattle and daub also shows evidence of partial burning.

The most recent work in the Gulf of Khambhat took place from October 2003 to January 2004 and was primarily a geologic study. Techniques used during this investigation include bathymetry survey, sub-bottom survey, side-scan survey, and magnetic survey.

One of the major findings from this investigation concerns the orientation of sand ripples at the site. NIOT researchers claim that there are two sets of ripples visible at the site; One set is a natural feature formed by tidal currents while the other set has formed in relation to underlying structural features.

One of the main controversies surrounding the GKCC is the dated piece of wood. Dr. D.P. Agrawal, chairman of the Paleoclimate Group and founder of Carbon-14 testing facilities in India stated in an article in Frontline Magazine that the piece was dated twice, at separate laboratories.

The NGRI in Hyderabad returned a date of 7190 BC and the BSIP in Hannover returned a date of 7545-7490 BC. Some archeologists, Agrawal in particular, contest that the discovery of an ancient piece of wood does not imply the discovery of an ancient civilization. Agrawal argues that the wood piece is a common find, given that 20,000 years ago the Arabian Sea was 100 meters lower than its current level, and that the gradual sea level rise submerged entire forests.

Another issue is the potsherds retrieved from the site during the various excavations. Researchers describe them as indicative of hand-made and wheel-turned pottery traditions. The remains found have simple rims with small incised lines. All of the remains found so far belong to small or miniature pieces of pottery. Part of the controversy is that these pieces might be natural geofacts; the small size of the artifact collection makes it difficult to conclusively analyze the pottery. But if the pottery is genuine, researchers say it should show some similarities to Harappan pottery, which is typically red and black and stamped with seals. Based on the current pottery collection, a stylistic continuity of Harappan civilization isn't evident.


In a History Channel presentation of "Ancient Aliens", November 11, 2010, ancient astronauts theorists and marine archaeologist presented evidence of a civilization that sank to the see thousands of years before humans living on the planet could have possibly built the ruins of the ancient cities at Khambhat and Dwarka, said to be the ancient dwelling place of Lord Krishna, who like many gods is thought to be an alien. One legend says that after a great battle with space ships, Krishna eventually departed Earth after which his Dwarka into the sea.

What was once thought of as mythology, as the discovery of an ancient sunken off of India, that could be Dwarka, all of that has changed. People are beginning to look at ancient sanskrit texts in new light as perhaps actual historical records. Did India's ancestors witness a war between extraterrestrial entities? Are these interpretations of India's ancient texts proof of alien contact in Earth's past? Are the descriptions of gods actually extraterrestrials?


Dwarka: The Home of Krishna is a Gateway to Heaven and an Underwater City   Ancient Origins - October 18, 2015
According to Hindu mythology, Dvaraka was a city where Krishna, the eighth avatar of Vishnu, once lived. It is believed that Krishna was born in Mathura, just south of Delhi in the modern state of Uttar Pradesh. His uncle, Kansa, was the tyrannical ruler of this city and was eventually killed by Krishna. Kansa's father-in-law, who was Jarasandh, the king of Magadha, was furious when he heard of Kansa's murder, and tried to avenge his death