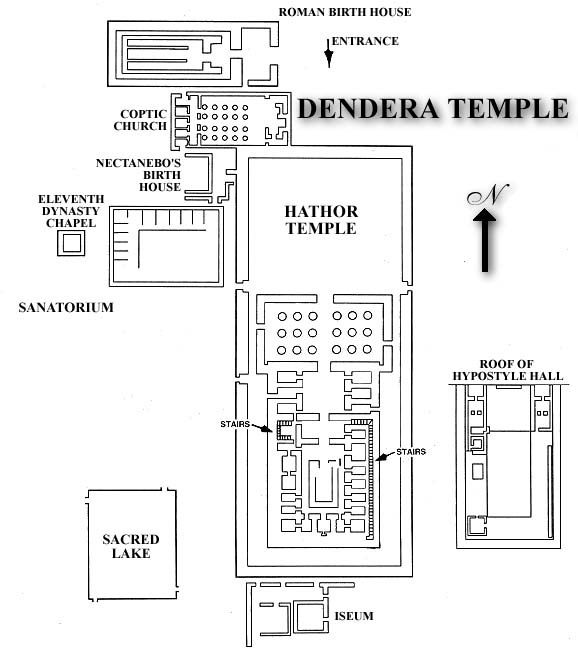 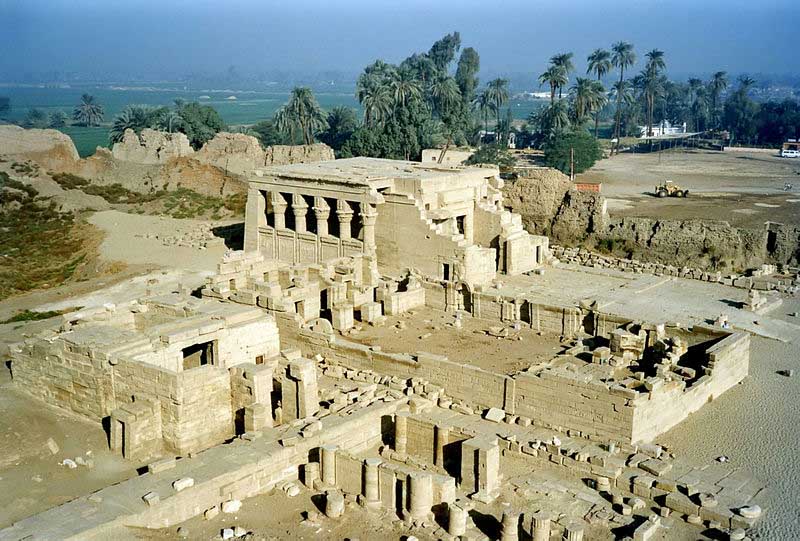 
Dendera Temple complex, (Ancient Egyptian: Iunet or Tantere)(19th century English spelling in most sources, including Belzoni was Tentyra). located about 2.5 km south-east of Dendera, Egypt. It is one of the best-preserved temple complexes in Egypt. The area was used as the sixth Nome of Upper Egypt, south of Abydos.

The entire complex covers some 40,000 square meters and is surrounded by a hefty mud brick enclosed wall. Dendera was a site for chapels or shrines from the beginning of history of ancient Egypt. It seems that pharaoh Pepi I (ca. 2250 BC) built on this site and evidence exists of a temple in the eighteenth dynasty (ca 1500 BC). But the earliest extant building in the compound today is the Mammisi raised by Nectanebo II - last of the native pharaohs (360-343 BC). The features in the complex include:

Temple of the birth of Isis, 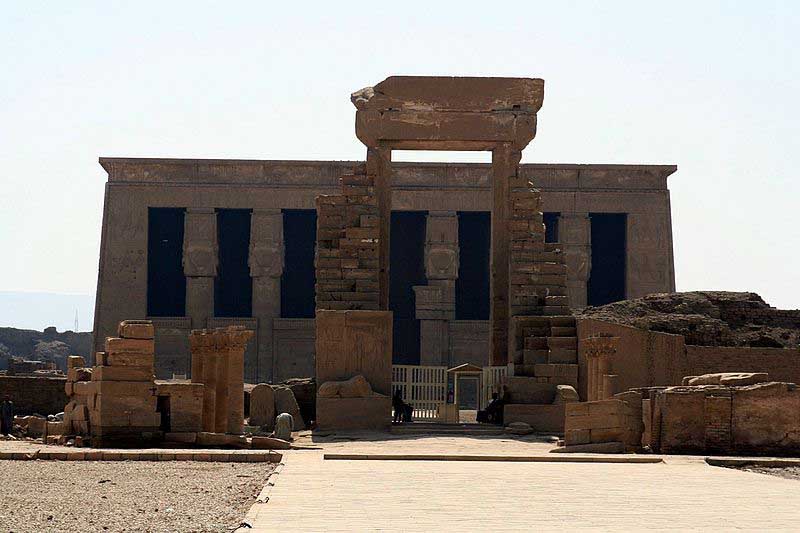 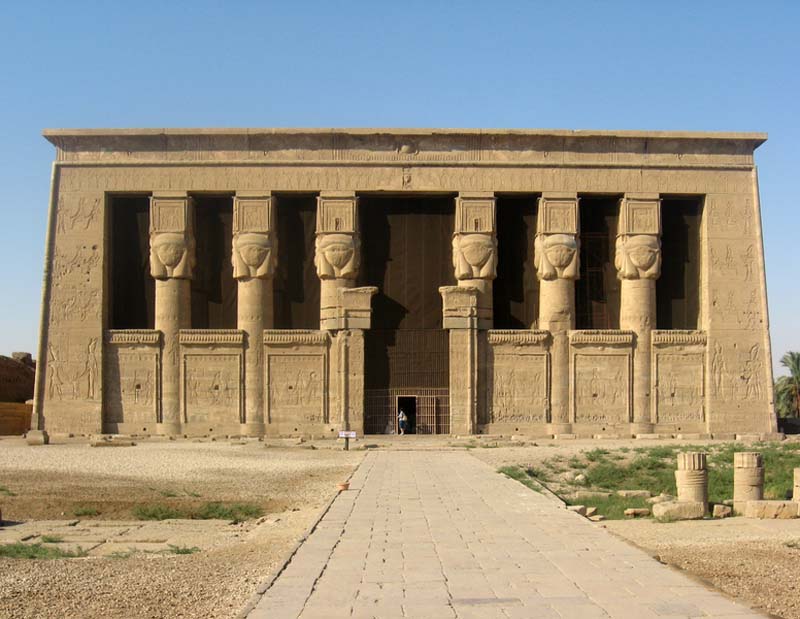 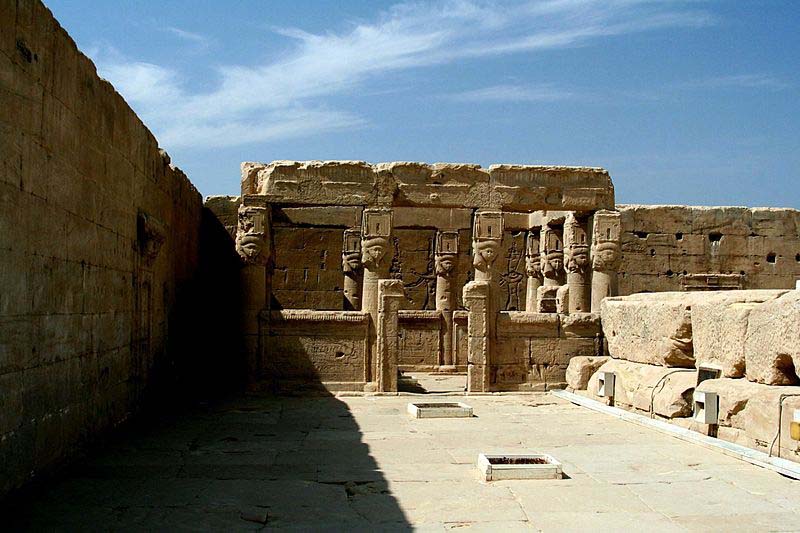 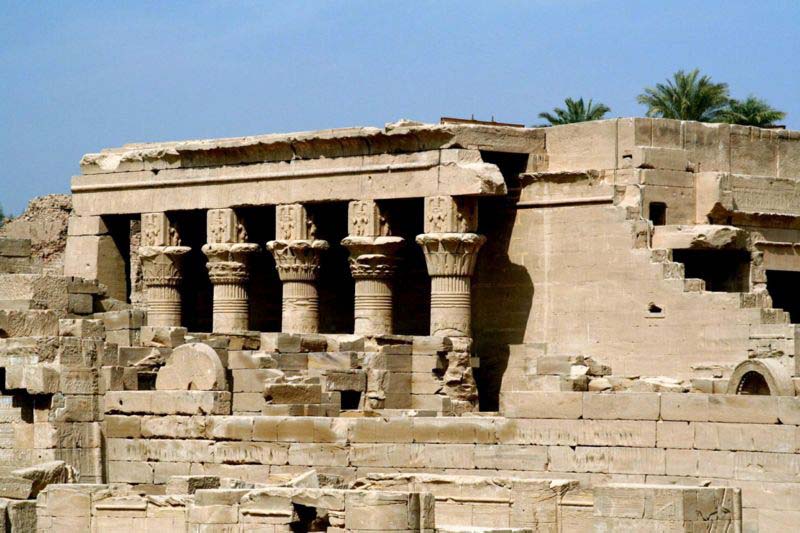 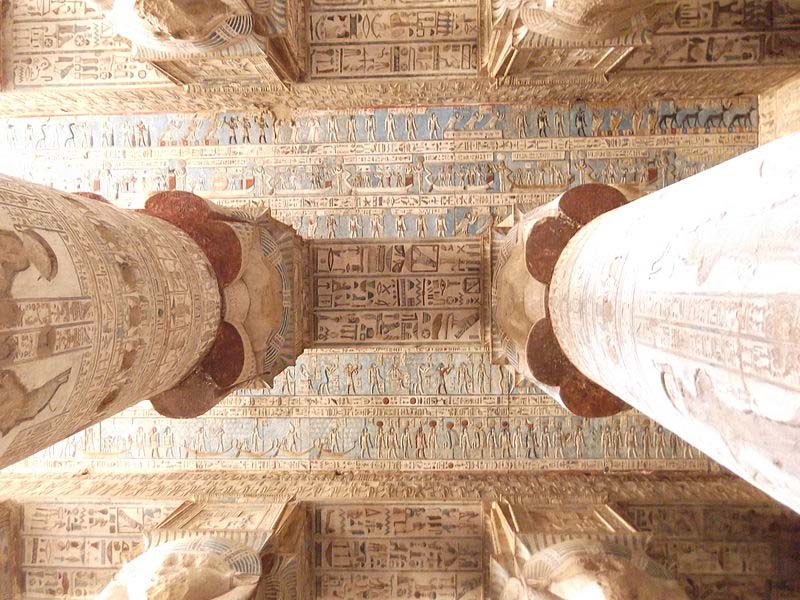 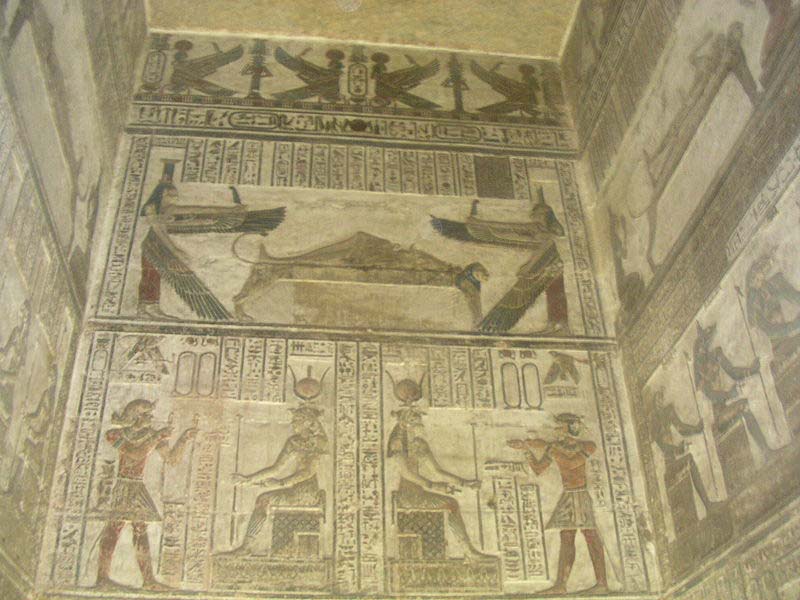 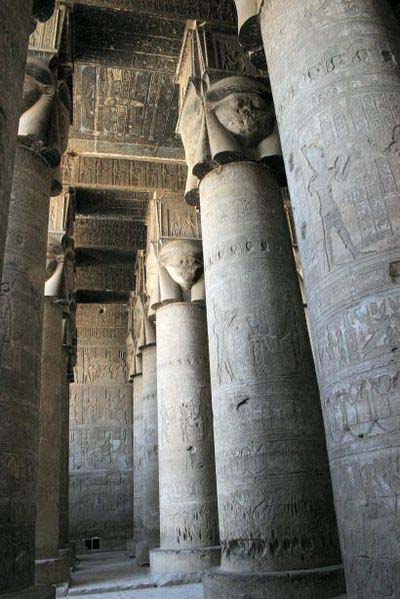 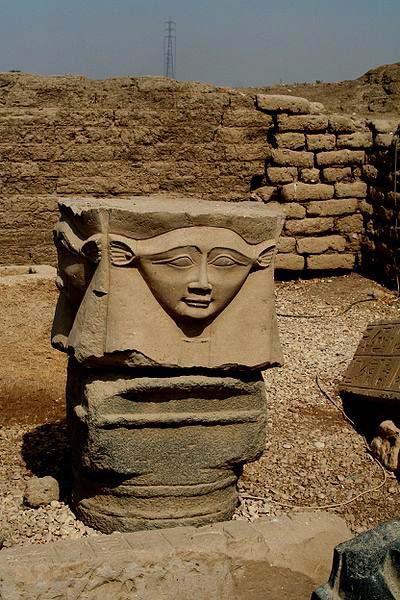 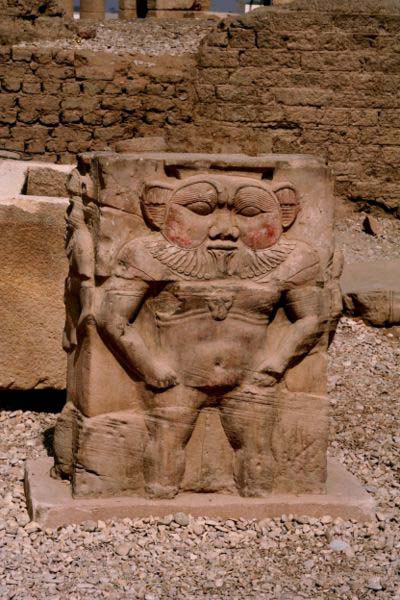 Bes at the Temple of Hathor, Dendera


The all overshadowing building in the Complex is the main temple, namely Hathor temple (historically, called the Temple of Tentyra). The temple has been modified on the same site starting as far back as the Middle Kingdom, and continuing right up until the time of the Roman emperor Trajan. The existing structure was built no later than the late Ptolemaic period. The temple, dedicated to Hathor, is one of the best preserved temples in all Egypt. Subsequent additions were added in Roman times.


Layout Elements of the Temple 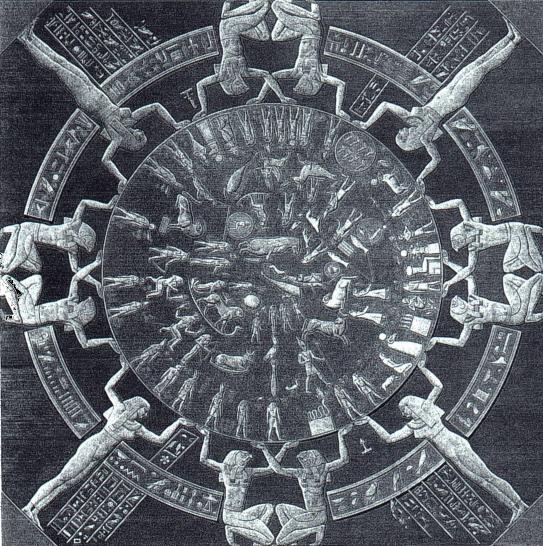 The sculptured Dendera zodiac (or Dendera Zodiac) is a widely known Egyptian bas-relief from the ceiling of the pronaos (or portico) of a chapel dedicated to Osiris in the Hathor temple at Dendera, containing images of Taurus (the bull) and the Libra (the scales). This chapel was begun in the late Ptolemaic period; its pronaos was added by the emperor Tiberius. This led Jean-FranŤois Champollion to date the relief correctly to the Greco-Roman period, but most of his contemporaries believed it to be of the New Kingdom.

The currently accepted date for the relief is 50 BC, since it shows the stars and planets in the positions they would have been seen at that date. The relief, which John H. Rogers characterized as "the only complete map that we have of an ancient sky" has been conjectured to represent the basis on which later astronomy systems were based. It is now on display at the Musee du Louvre, Paris.

The zodiac is a planisphere or map of the stars on a plane projection, showing the 12 constellations of the zodiacal band forming 36 decans of ten days each, and the planets. These decans are groups of first-magnitude stars. These were used in the ancient Egyptian calendar, which was based on lunar cycles of around 30 days and on the heliacal rising of the star Sothis (Sirius).

Its representation of the zodiac in circular form is unique in ancient Egyptian art. More typical are the rectangular zodiacs which decorate the same temple's pronaos.

The celestial arch is represented by a disc held up by four pillars of the sky in the form of women, between which are inserted falcon-headed spirits. On the first ring, 36 spirits symbolize the 360 days of the Egyptian year.

On an inner circle, one finds constellations, showing the signs of the zodiac. Some of these are represented in the same Greco-Roman iconographic forms as their familiar counterparts (e.g. the Ram, Taurus, Scorpio, and Capricorn, albeit most in odd orientations in comparison to the conventions of ancient Greece and later Arabic-Western developments), whilst others are shown in a more Egyptian form: Aquarius is represented as the flood god Hapy, holding two vases which gush water. Rogers noted the similarities of unfamiliar iconology with the three surviving tablets of a "Seleucid zodiac" and both relating to kudurru, "boundary-stone" representations: in short, Rogers sees the Dendera zodiac as "a complete copy of the Mesopotamian zodiac".

During the Napoleonic campaign in Egypt, Vivant Denon drew the circular zodiac, the more widely known one, and the rectangular zodiacs. In 1802, after the Napoleonic expedition, Denon published engravings of the temple ceiling in his Voyage dans la Basse et la Haute Egypte. These elicited a controversy as to the age of the zodiac representation, ranging from tens of thousands to a thousand years to a few hundred, and whether the zodiac was a planisphere or an astrological chart. Louis Charles Antoine Desaix, a member of the expedition, decided to remove the relief to France and so, in 1820, the antiquities dealer Sebastien-Louis Saulnier commissioned Jean Baptiste Leloraine, a master mason, to remove the circular zodiac with saws, jacks, and scissors constructed for the job. The zodiac ceiling was moved in 1821 to Restoration Paris and, by 1822, was installed by Louis XVIII in the Royal Library, later designated Bibliotheque nationale de France. In 1964, the zodiac moved from the Bibliotheque Nationale to the Louvre.

The controversy around the zodiac, called the "Dendera Affair", involved people of the likes of Joseph Fourier (who estimated that the age was 2500 BC), Thomas Young, Jean-FranŤois Champollion, and Jean-Baptiste Biot. Johann Karl Burckhardt and Jean-Baptiste Coraboeuf held, after analysis of the zodiac, that the ancient Egyptians understood the precession of the equinoxes. Champollion, among others, believed that it was a religious zodiac. Champollion deciphered the names of Tiberius, Claudius, Nero and Domitian on the ceiling of Dendera's temple, and placed the zodiac in the era of Roman rule over Egypt. Baron Georges Cuvier placed the date 123 AD to 147 AD. His discussion of the dating question is an interesting summary of the reasoning as he understood it in the 1820s.

Sylvie Cauville of the Centre for Computer-aided Egyptological Research at Utrecht University and Eric Aubourg dated it to 50 BC through an examination of the configuration it shows of the five planets known to the Egyptians, a configuration that occurs once every thousand years, and the identification of two eclipses. 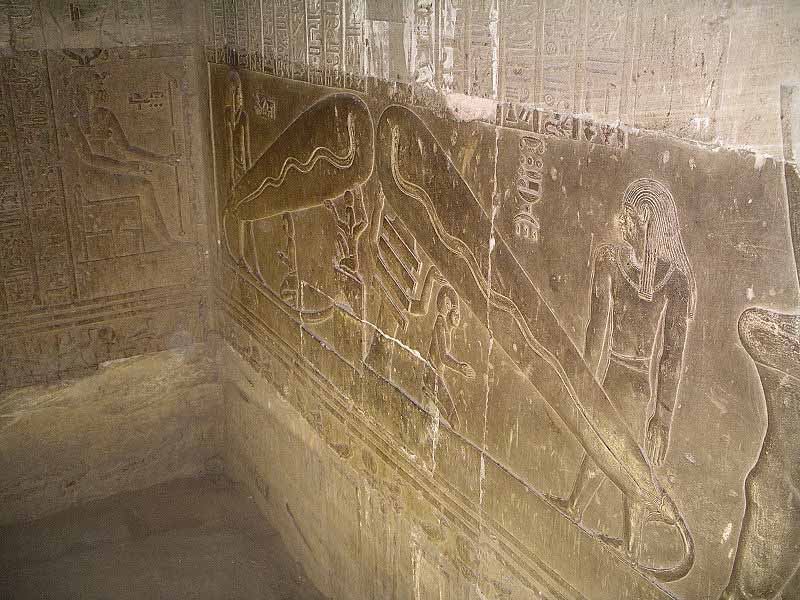 Hathor Temple has a relief sometimes known as the Dendera light because of a controversial fringe thesis about its nature. The Dendera light images comprise five stone reliefs (two of which contain a pair of "lights") in the Hathor temple at the Dendera Temple complex located in Egypt. The view of Egyptologists is that the relief is a mythological depiction of a djed pillar and a lotus flower, spawning a snake within, representing aspects of Egyptian mythology. In contrast to this interpretation, there is a fringe science suggestion that departs significantly from the views of Egyptologists arguing that it is actually a representation of an Ancient Egyptian lightbulb.