The Chocolate Hills of Asia 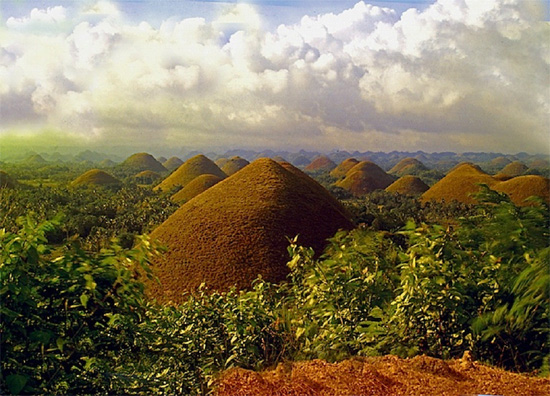 The Chocolate Hills of Asia

The Chocolate Hills are considered to be one of the seven natural wonders of Asia. They are composed of limestone that, according to geologists, has been eroded by rainwater and subsidence into what is known as a "karst formation". Since rainwater is a weak carbonic acid solution, as it flows through fractures, rock dissolves, forming underground rivers and caverns. The subterranean formations are thought to grow larger over time, so more water can drain through the system, allowing it to dissolve away even more rock, creating larger formations in an ever increasing feedback loop. Eventually, the terrain becomes a network of sinkholes, sunken streams, and springs. The rock that remains is said to be harder, so the rain is not able to weather it as easily.

The Chocolate Hills are cone-shaped mounds that cover an area of approximately 50 square kilometers. There are estimated to be as many as 1,700 hummocks in the formation, resulting in a rolling terrain like swells in a vast grassland sea. The hills vary in height, the largest reaching 120 meters and the smallest around 30 meters. During the Philippine dry season, the grass cover turns brown, thus the name, since they are reminiscent of giant Hershey's Kisses. Read more ... 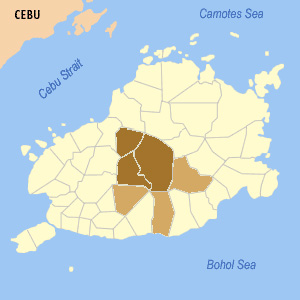 
The Chocolate Hills is a geological formation in Bohol Province, Philippines. There are at least 1,260 hills but there may be as many as 1,776 hills spread over an area of more than 50 square kilometres (20 sq mi). They are covered in green grass that turns brown (like chocolate) during the dry season, hence the name. The Chocolate Hills is a famous tourist attraction of Bohol. They are featured in the provincial flag and seal to symbolize the abundance of natural attractions in the province. They are in the Philippine Tourism Authority's list of tourist destinations in the Philippines; they have been declared the country's third National Geological Monument and proposed for inclusion in the UNESCO World Heritage List.

These conical hills are geomorphological features called cockpit karst, which were created by a combination of the dissolution of limestone by rainfall, surface water, and groundwater, and their subaerial erosion by rivers and streams after they had been uplifted above sea level and fractured by tectonic processes. These hills are separated by well developed flat plains and contain numerous caves and springs. The Chocolate Hills are considered to be a remarkable example of conical karst topography.


Four legends explain the formation of the Chocolate Hills. The first tells the story of two feuding giants who hurled rocks, boulders, and sand at each other. The fighting lasted for days, and exhausted the two giants. In their exhaustion, they forgot about their feud and became friends, but when they left they forgot to clean up the mess they had made during their battle, hence the Chocolate Hills.

A more romantic legend tells of a giant named Arogo who was extremely powerful and youthful. Arogo fell in love with Aloya, who was a simple mortal. Aloya's death caused Arogo much pain and misery, and in his sorrow he could not stop crying. When his tears dried, the Chocolate Hills were formed.

The third legend tells of a town being plagued by a giant carabao, who ate all of their crops. Finally having had enough, the townsfolk took all of their spoiled food and placed it in such a way that the carabao would not miss it. Sure enough, the carabao ate it, but his stomach couldn't handle the spoiled food, so he defecated, leaving behind him a mound of feces, until he had emptied his stomach of the food. The feces then dried, forming the Chocolate Hills.

The last legend is about a gluttonous giant named Miguel that eats everything in his path. One day he came to a plain. He saw a beautiful young woman named Adrianna. To win her affection, he needed to lose weight. So he excreted everything he ate. In the end, his fecal matter covered the land and he won Adrianna's affection. Read more