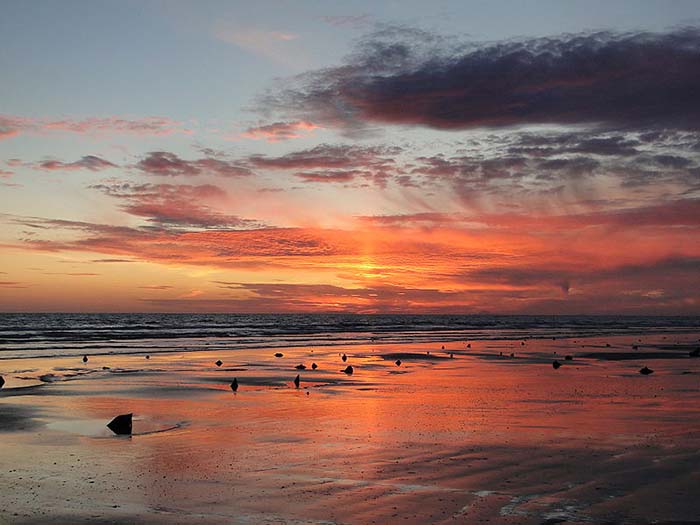 Cantre'r Gwaelod, also known as Cantref Gwaelod or Cantref y Gwaelod (English: The Lowland Hundred), is a legendary ancient sunken kingdom said to have occupied a tract of fertile land lying between Ramsey Island and Bardsey Island in what is now Cardigan Bay to the west of Wales. It has been described as a "Welsh Atlantis" and has featured in folklore, literature and song.

There is no reliable physical evidence of the substantial community that legend promises lies under the sea, although several reports exist of remains being sighted. In 1770, Welsh antiquarian scholar William Owen Pughe reported seeing sunken human habitations about four miles (6.4 km) off the Ceredigion coast, between the rivers Ystwyth and Teifi. In the 1846 edition of The Topographical Dictionary of Wales, Samuel Lewis described a feature of stone walls and causeways beneath the shallow waters of Cardigan Bay.

Cantre'r Gwaelod was an area of land which, according to legend, was located in an area west of present-day Wales which is now under the waters of Cardigan Bay. Accounts variously suggest the tract of land extended from Bardsey Island to Cardigan or as far south as Ramsey Island Legends of the land suggest that it may have extended 20 miles west of the present coast.

There are several versions of the myth. The earliest known form of the legend is usually said to appear in the Black Book of Carmarthen (Welsh: Llyfr Du Caerfyrddin'), in which the land is referred to as Maes Gwyddno (English: the Plain of Gwyddno). In this version, the land was lost to floods when a well-maiden named Mererid neglected her duties and allowed the well to overflow.

Rachel Bromwich questions this identification, saying that "There is no certainty, however, that in twelfth century tradition Maes Gwyddneu did represent the submerged land in Cardigan Bay." She also links Gwyddno with the northern British kingdoms, not Wales.

The popular version known today is thought to have been formed from the 17th century onwards. Cantre'r Gwaelod is described as a low-lying land fortified against the sea by a dyke, Sarn Badrig (Saint Patrick's causeway), with a series of sluice gates which were opened at low tide to drain the land.

Cantre'r Gwaelod's capital was Caer Wyddno (English: the Fort of Gwyddno), seat of the ruler Gwyddno Garanhir. Two princes of the realm held charge over the dyke. One of these princes, called Seithenyn, is described in one version as a notorious drunkard and carouser, and it was through his negligence that the sea swept through the open floodgates, ruining the land. The church bells of Cantre'r Gwaelod are said to ring out in times of danger. Read more


Cantre'r Gwaelod: The (Mythical?) Sunken Kingdom of Wales   Epoch Times - May 25, 2015
The story of Atlantis is one of the most renowned and enduring tales from ancient Greece. This island, mentioned in the works of the philosopher Plato, was said to have been swallowed up by the sea. Yet the story of Atlantis is not unique to the ancient Greeks, as other cultures also have similar legends of landmasses that disappeared under the waves. One of these is the story of Cantre'r Gwaelod from Wales.

Cantre'r Gwaelod (meaning "The Lowland Hundred") is said to lie between Ramsey Island and Bardsey Island in the area known today as Cardigan Bay, in the west of Wales, UK. It is believed that Cantre'r Gwaelod extended about 20 miles (32 kilometers) west of the current shoreline into the bay.

During the 6th century, Cantre'r Gwaelod was said to have been ruled over by a legendary king by the name of Gwyddno Garanhir. In fact, up to around the 17th century, Cantre'r Gwaelod was known as Maes Gwyddno (meaning "Gwyddno's Land"), so named after this Welsh ruler. An earlier version of the legend associated with Maes Gwyddno asserts that the land was submerged under water when Mererid, a priestess of a fairy well, allowed the water to overflow.

A different legend, however, is known and told today. In this version, Cantre'r Gwaelod is described as an extremely fertile land, so much so that an acre of land there was worth four elsewhere. The only problem with Cantre'r Gwaelod was that it was said to be dependent on a dyke to protect it from the sea. At low tide, the sluice gates were opened to allow water to drain from the land, and at high tide, the gates were closed.