Battle of the Pyramids 1798 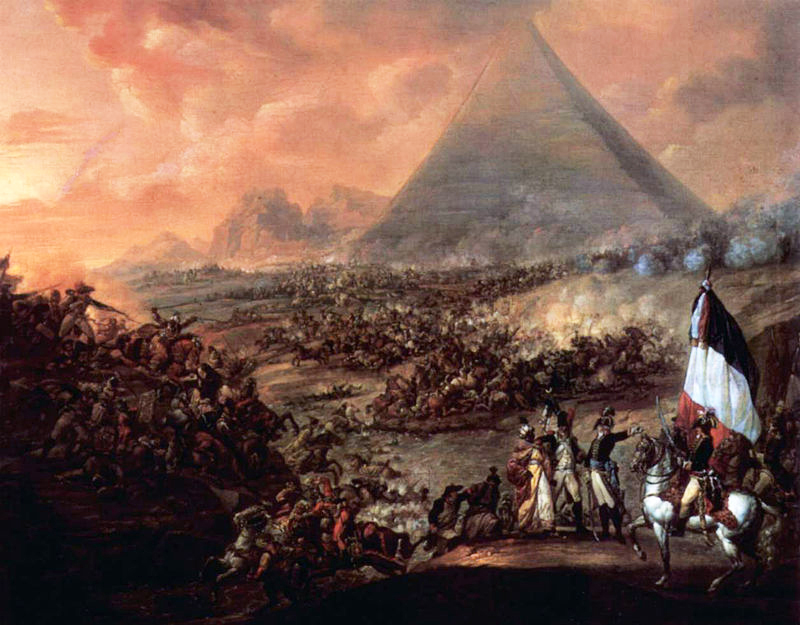 The Battle of the Pyramids, also known as the Battle of Embabeh, was a major engagement fought on 21 July 1798, during the French Invasion of Egypt. The battle took place near the village of Embabeh, across the Nile River from Cairo, but was named by Napoleon after the Great Pyramid of Giza visible nearly 9 miles away.

After capturing Alexandria and crossing the desert, the French army lead by General Napoleon Bonaparte, scored a decisive victory against the main army of the local Mamluk rulers, wiping out almost the entire Ottoman army located in Egypt. It was the first battle where Bonaparte personally devised and employed the divisional square tactic to great effect. The deployment of the French brigades into these massive rectangular formations repeatedly threw back multiple cavalry charges of the Mamluks.

The victory effectively sealed the French conquest of Egypt as Murad Bey salvaged the remnants of his army, chaotically fleeing to Upper Egypt. French casualties amounted to roughly 300, but Ottoman and Mamluk casualties soared into the thousands. Napoleon entered Cairo after the battle and created a new local administration under his supervision. The battle exposed the fundamental military and political decline of the Ottoman Empire throughout the past century, especially compared to the rising power of France.


After landing in Ottoman-controlled Egypt and capturing Alexandria on 2 July 1798, the French army lead by General Bonaparte marched down the desert toward Cairo. They met the forces of the ruling Mamluks nine miles (15 kilometres) from the Pyramids and only four miles (6 kilometres) from Cairo.

The Mamluk forces were commanded by two Georgian mamluks, Murad Bey and Ibrahim Bey, and had a force of powerful and highly trained cavalry at their command as well as fellahin militia acting as infantry.

On 13 July after French scouts located Murad's encampment, Bonaparte ordered an advance toward the enemy's forces, engaging them during the brief battle of Chobrakit. After the destruction of their flagship by French field artillery the Mamluks retreated instead of engaging, the skirmish ending in a minor French victory. 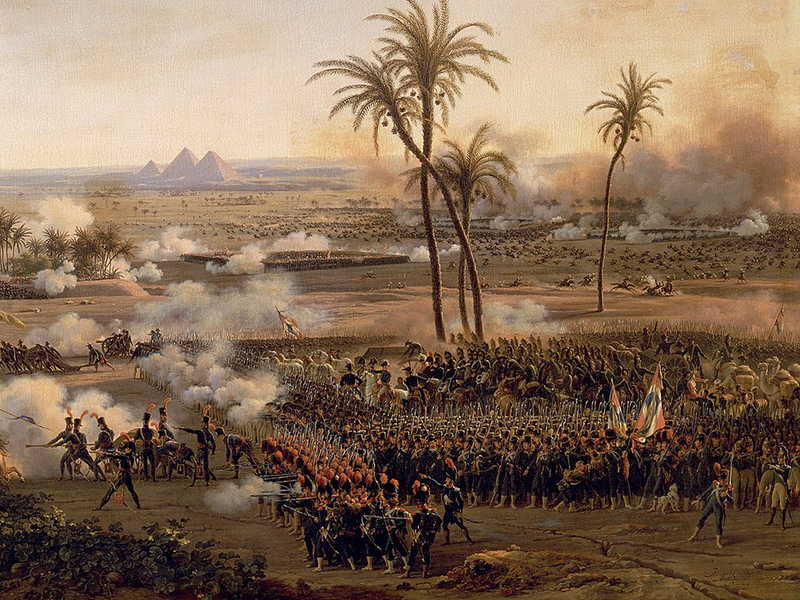 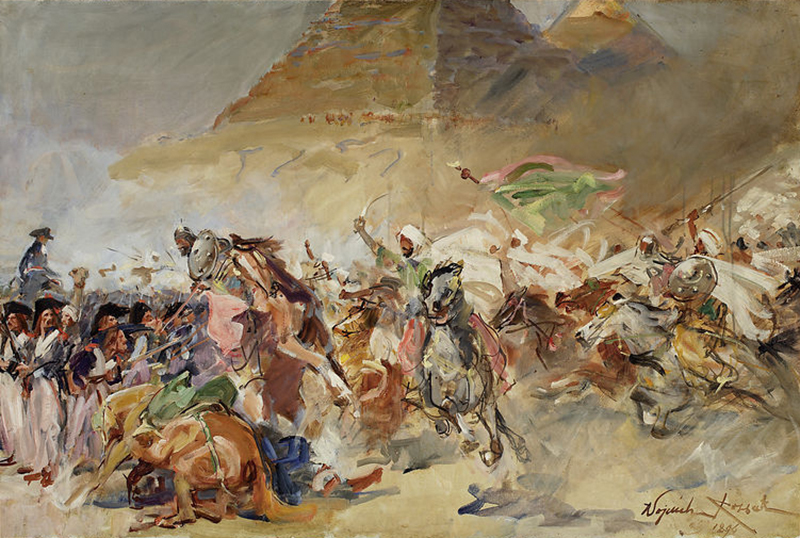 On 21 July, after marching all night, the French caught up with the Ottoman force in the vicinity of the village of Embabeh, after one hour rest the men were ordered to get ready for battle. Bonaparte ordered an advance on Murad's army with each of the five divisions of his army organized into hollow rectangles with cavalry and baggage at the center and cannon at the corners. Bonaparte exhorted his troops to remain steady and keep their ranks closed up when facing the Mameluke cavalry.

The French divisions advanced south in echelon, with the right flank leading and the left flank protected by the Nile. From right to left, Bonaparte posted the divisions of Louis Charles Antoine Desaix, Jean-Louis-Ébénézer Reynier, Charles-François-Joseph Dugua, Honore Vial and Louis Andre Bon. In addition, Desaix sent a small detachment to occupy the nearby village of Biktil, just to the west. Murad anchored his right flank on the Nile at the village of Embabeh, which was fortified and held with infantry and some ancient cannons. His Mamluk cavalry deployed on the desert flank. Ibrahim, with a second army, watched helplessly from the east bank of the Nile, unable to intervene.

At about 15:30, the Mamluk cavalry hurled itself at the French without warning. The divisional squares of Desaix, Reynier and Dugua held firm and repelled the horsemen with point-blank musket and artillery fire. Unable to make an impression on the French formations, some of the frustrated Mamluks rode off to attack Desaix's detached force. This was also a failure. Meanwhile, nearer the river, Bon's division deployed into attack columns and charged Embabeh.

Breaking into the village, the French routed the garrison. Trapped against the river, many of the Mamluks and infantry tried to swim to safety, and hundreds drowned. The French reported a loss of 29 killed and 260 wounded. Murad's losses were far heavier, perhaps as many as 10,000 including 3,000 of the elite Mamluk cavalry. Murad escaped to Upper Egypt with his 3,000 surviving cavalry, where he carried out an active guerrilla campaign before being defeated by Desaix in late 1799.


Upon hearing news of the defeat of their legendary cavalry, the waiting Mamluk armies in Cairo dispersed to Syria, Bonaparte entered the conquered capital of Egypt on 24 July.

On 11 August French forces caught up with Ibrahim Bey inflicting on him a crushing defeat at Salalieh.

The Battle of the Pyramids signaled the beginning of the end of seven centuries of Mamluk rule in Egypt. Despite this auspicious beginning, British Admiral Horatio Nelson's victory in the Battle of the Nile ten days later ended Napoleon's hopes for a conquest of the Middle East.

Scientific studies of both ancient and modern Egypt, together with the legendary status of the Battle of the Pyramids, established a mystique embracing both the Pharaohs and the exotic Orient.