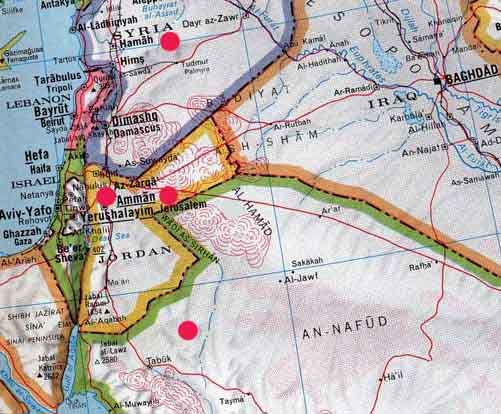 Visible Only From Above, Mystifying 'Nazca Lines' Discovered in Mideast   Live Science - September 14, 2011


They stretch from Syria to Saudi Arabia, can be seen from the air but not the ground, and are virtually unknown to the public. They are the Middle East's own version of the Nazca Lines - ancient "geolyphs," or drawings, that span deserts in southern Peru - and now, thanks to new satellite-mapping technologies, and an aerial photography program in Jordan, researchers are discovering more of them than ever before.

They number well into the thousands. Referred to by archaeologists as "wheels," these stone structures have a wide variety of designs, with a common one being a circle with spokes radiating inside. Researchers believe that they date back to antiquity, at least 2,000 years ago. They are often found on lava fields and range from 82 feet to 230 feet (25 meters to 70 meters) across.

"In Jordan alone we've got stone-built structures that are far more numerous than (the) Nazca Lines, far more extensive in the area that they cover, and far older," said David Kennedy, a professor of classics and ancient history at the University of Western Australia.

Kennedy's new research, which will be published in a forthcoming issue of the Journal of Archaeological Science, reveals that these wheels form part of a variety of stone landscapes. These include kites (stone structures used for funneling and killing animals); pendants (lines of stone cairns that run from burials); and walls, mysterious structures that meander across the landscape for up to several hundred feet and have no apparent practical use.

His team's studies are part of a long-term aerial reconnaissance project that is looking at archaeological sites across Jordan. As of now, Kennedy and his colleagues are puzzled as to what the structures may have been used for or what meaning they held.

Kennedy's main area of expertise is in Roman archaeology, but he became fascinated by these structures when, as a student, he read accounts of Royal Air Force pilots flying over them in the 1920s on airmail routes across Jordan. "You can't not be fascinated by these things," Kennedy said.

Indeed, in 1927 RAF Flight Lt. Percy Maitland published an account of the ruins in the journal Antiquity. He reported encountering them over "lava country" and said that they, along with the other stone structures, are known to the Bedouin as the "works of the old men."

Kennedy and his team have been studying the structures using aerial photography and Google Earth, as the wheels are hard to pick up from the ground, Kennedy said. The designs must have been clearer when they were originally built. People have probably walked over them, walked past them, for centuries, millennia, without having any clear idea what the shape was.

So far, none of the wheels appears to have been excavated, something that makes dating them, and finding out their purpose, more difficult. Archaeologists studying them in the pre-Google Earth era speculated that they could be the remains of houses or cemeteries. Kennedy said that neither of these explanations seems to work out well. There seems to be some overarching cultural continuum in this area in which people felt there was a need to build structures that were circular.

Some of the wheels are found in isolation while others are clustered together. At one location, near the Azraq Oasis, hundreds of them can be found clustered into a dozen groups. Some of these collections around Azraq are really quite remarkable.

In Saudi Arabia, Kennedy's team has found wheel styles that are quite different: Some are rectangular and are not wheels at all; others are circular but contain two spokes forming a bar often aligned in the same direction that the sun rises and sets in the Middle East.

The ones in Jordan and Syria, on the other hand, have numerous spokes and do not seem to be aligned with any astronomical phenomena. "On looking at large numbers of these, over a number of years, I wasn't struck by any pattern in the way in which the spokes were laid out," Kennedy said.

Dating the wheels is difficult, since they appear to be prehistoric, but could date to as recently as 2,000 years ago. The researchers have noted that the wheels are often found on top of kites, which date as far back as 9,000 years, but never vice versa. "That suggests that wheels are more recent than the kites," Kennedy said.

Amelia Sparavigna, a physics professor at Politecnico di Torino in Italy, told Live Science in an email that she agrees these structures can be referred to as geoglyphs in the same way as the Nazca Lines are. "If we define a 'geoglyph' as a wide sign on the ground of artificial origin, the stone circles are geoglyphs," Sparavignawrote in her email. The function of the wheels may also have been similar to the enigmatic drawings in the Nazca desert.

"If we consider, more generally, the stone circles as worship places of ancestors, or places for rituals connected with astronomical events or with seasons, they could have the same function of the geoglyphs of South America, the Nazca Lines for instance. The design is different, but the function could be the same," she wrote in her email.

Kennedy said that for now the meaning of the wheels remains a mystery. "The question is what was the purpose?" < 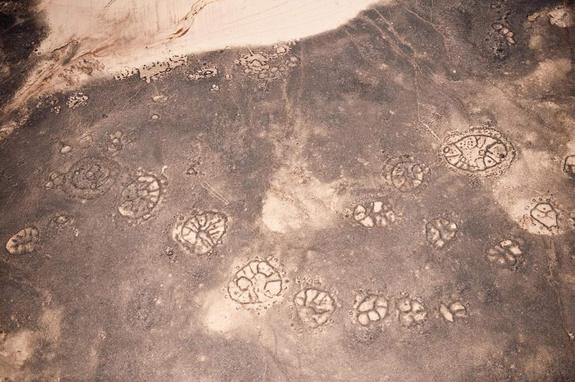 
The area near the Azraq Oasis in Jordan has hundreds of wheels, large structures made of stone that date back at least 2,000 years. These wheel structures are often found on lava fields and range from 82 feet to 230 feet (25 meters to 70 meters) across. Archaeologists used to believe that the Azraq Oasis wheels were used as a cemetery although that is now in doubt. (Unless otherwise noted, all the photographs in this album are taken from the air, as one can't make out the structures from flat ground.) 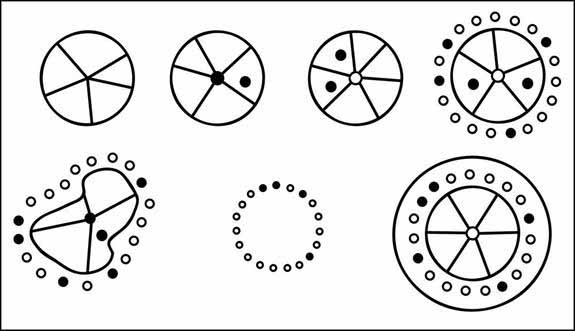 The Harrat ash-Sham lava field stretches from Syria
to Saudi Arabia and contains thousands of wheels.
Drawings reveal the various shapes of the structures. 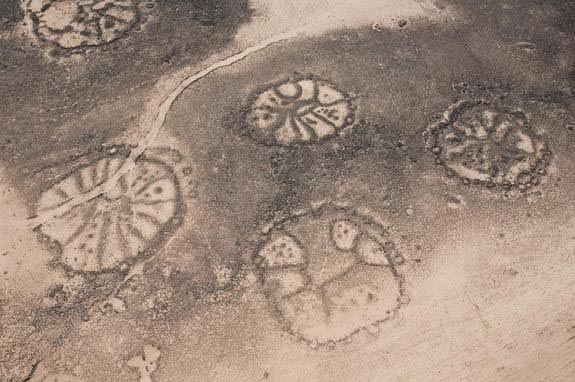 Another cluster of wheels found near the Azraq Oasis. 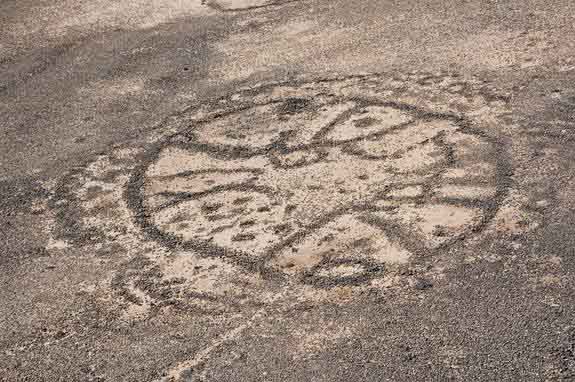 Close-up photo of one of the wheels from the Azraq area.

Photographed from the air it has an amorphous design. 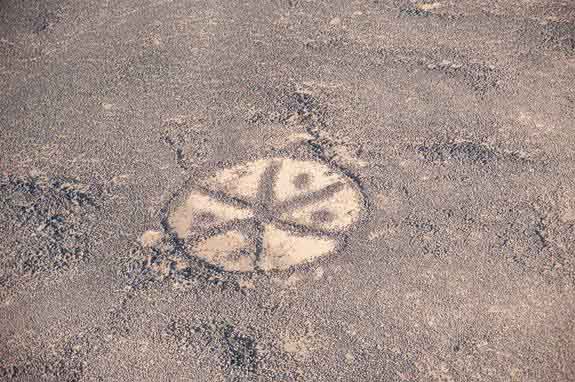 These stone structures have a wide variety of designs,
with a common one being a circle with spokes radiating inside.
This wheel in Jordan looks like it has four dots within its spokes. 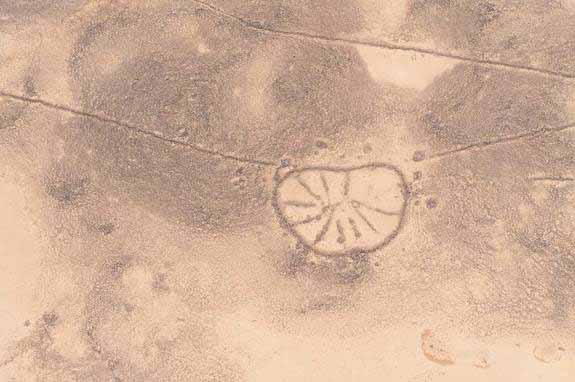 This circular wheel looks kind of squeezed in this aerial photo. Researchers are still puzzled over what these stone circles were used for, with some suggesting perhaps they were places of worship or used for rituals connected with astronomical events. 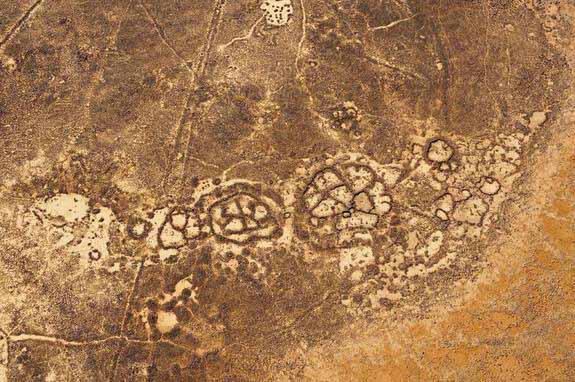 The wheels in this picture are very amorphous, their spokes looking like bubbles. 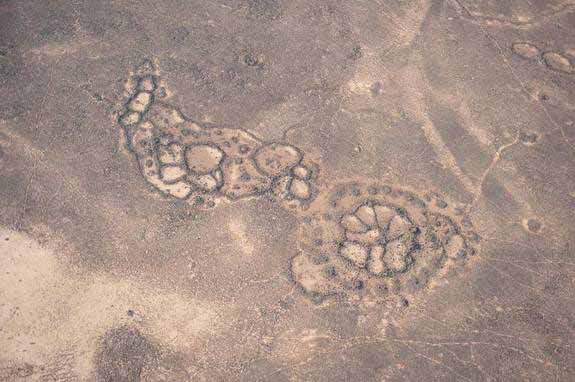 Cairns, or piles of stones, are often found associated with the wheels,
sometimes circling the perimeter and other times in among the spokes.
Here, the wheel to the south has a ring of such cairns around it. 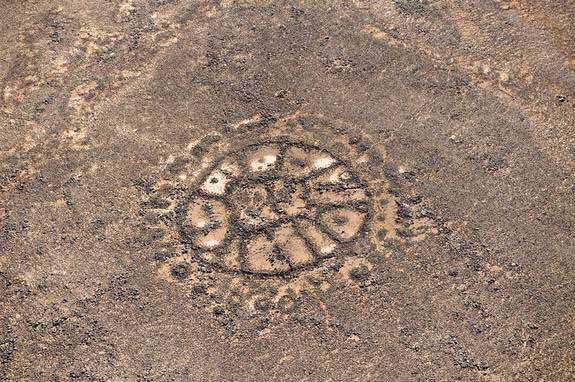 The spokes of this wheel radiate from a central hub.


Closing In On Wheels 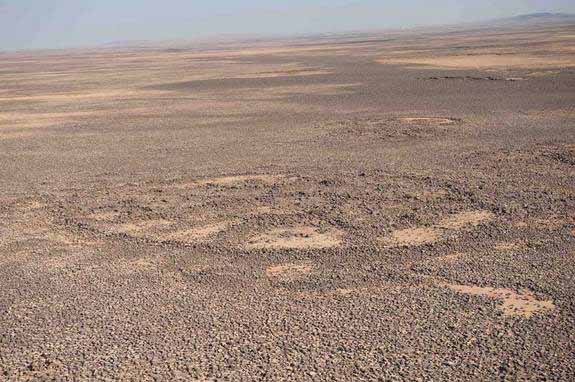 Even from reduced elevation the wheels are still visible. 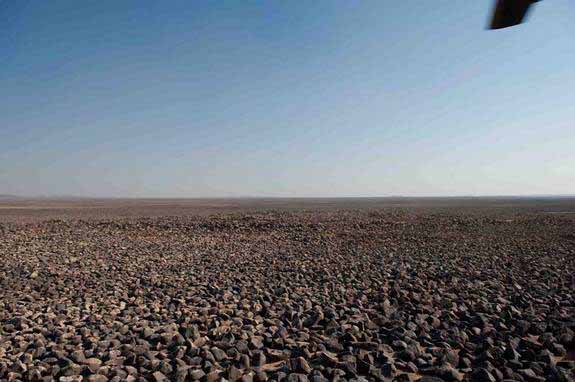 At ground level the two wheels are practically invisible
and appear as little more than a jumble of stones.