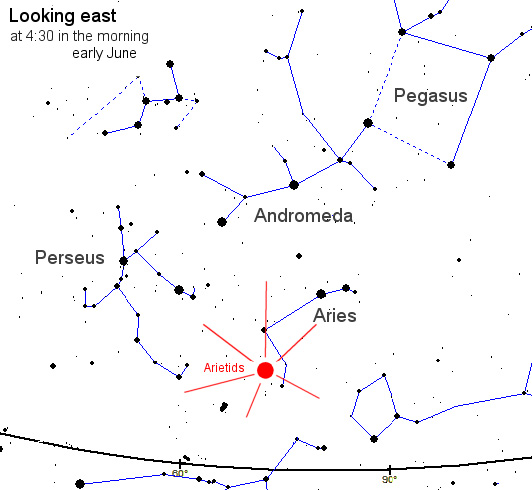 The Arietids are a strong meteor shower that lasts from May 22 to July 2 each year, and peak on June 7. The Arietids, along with the Zeta Perseids, are the most intense daylight meteor showers of the year. The source of the shower is unknown, but scientists suspect that they come from the asteroid 1566 Icarus, although the orbit also corresponds similarly to 96P/Machholz. Read more ...

Every year in early June thousands of meteors streak across the sky. Most are invisible, though, because the Sun is above the horizon while the shower is most intense. These daylight meteors are called the Arietids. They stream from a radiant point in the constellation Aries, which lies just 30 degrees from the Sun in June. No one is sure where Arietid meteoroids come from, although some astronomers suspect they are debris from the sungrazing asteroid 1566 Icarus. Another possibility is that the Arietids come from the breakup of a giant comet thousands of years ago. Pre-dawn Arietids tend to be "Earthgrazers"--meteors that skim horizontally through the upper atmosphere from radiants near the horizon. Spectacular Earthgrazers are usually slow and bright, streaking far across the sky--worth waking up for! Read more