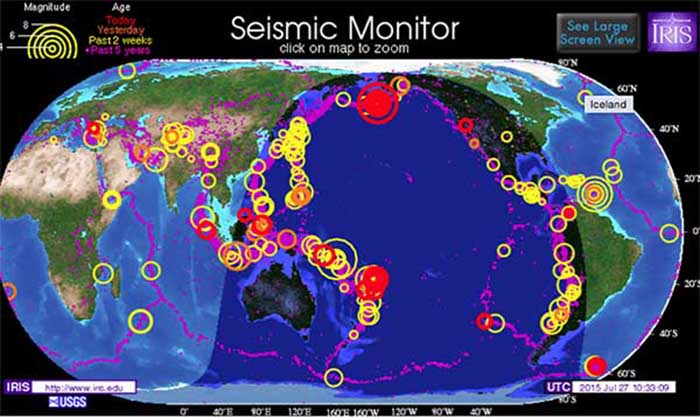 The Aleutian Islands are a chain of 14 large volcanic islands and 55 smaller ones belonging to both the United States and Russia. The islands, with their 57 volcanoes, are in the northern part of the Pacific Ring of Fire. Because of the location of the islands, stretching like a broken bridge from Asia to America, many anthropologists believe they were a route of the first human occupants of the Americas. The earliest known evidence of human occupation in the Americas is much farther south; the early human sites in Alaska have probably been submerged by rising waters during the current interglacial period. The U.S. conducted underground tests of nuclear weapons on Amchitka Island from 1965 to 1971 as part of the Vela Uniform program. The program involved numerous experiments using conventional high explosives. The final detonation, the Cannikin, was the largest underground nuclear explosion by the U.S. Read more


The April 1, 1946 Aleutian Islands 8.1 earthquake was followed by a Pacific-wide tsunami. It resulted in 165 casualties (159 people on Hawaii and six in Alaska) and over $26 million in damages. Multiple destructive waves at heights ranging from 45-130 ft occurred. The tsunami obliterated the Scotch Cap Lighthouse on Unimak Island, Alaska among others, and killed all five lighthouse keepers. The wave reached Kauai 4.5 hours after the quake, and Hilo 4.9 hours later. The tsunami was unusually powerful for the size of the earthquake and due to the discrepancy between the size of the tsunami and the relatively low magnitude on the surface wave magnitude scale, it is classified as a tsunami earthquake. The large-scale destruction prompted the creation of the Seismic Sea Wave Warning System, which later became the Pacific Tsunami Warning Center in 1949.