The Closing Ceremonies for Clean Up at Ground Zero 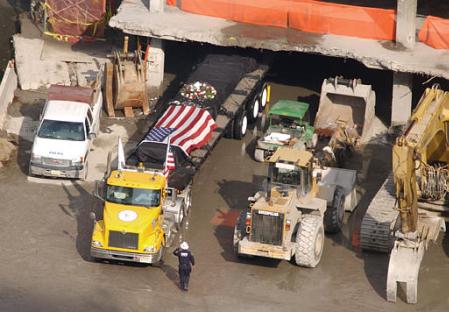 Today, I spent time with my friend John Klein, a carpenter scheduled to work in Tower One on September 11, 2001, but a delay caused him to be late for work, later unable to get close to Ground Zero in the confusion of the day. After 9/11, John became part of the demolition crew. He lost several close friends on 9/11. He said for weeks before 9/11, dreamed about huge tsunami-like waves engulfing the towers as they fell to the ground. This must link to the rescue efforts of the firemen.

It has taken 8 months to clear the debris at Ground Zero, finding and removing the remains of those lost that day. Many people will never recover, their families remaining in a kind of limbo that leaves them without the peace of closure. They still come to see me...these souls who wish to communicate with loved ones who have crossed over or to share their stories about - being rescued that day, knowing someone who escaped, personally witnessing the events, living near Ground Zero in the aftermath, or how reality has altered for them since the day the world changed. No one is really the same. Everyone was touched by the events.

The trauma has made New Yorkers stronger. From Diversity came Unity. The pulse of the city is faster and stronger than ever before. We battle each other as part of the daily 3D drama yet we stand united in face of a greater enemy.

People mourned for days and weeks ... even now there are daily reminders in the lives of many of us of the day the world changed.

We remember those lost and those who were trapped. For a short time they used their cell phones to say good-by to those left behind as they were trapped in one of the two buildings that would become their tombs.

Today is another step in the healing process of those left behind and for the city itself, yet the reminders will continue.

There was a moment of silence at 10:29 am, the time the second tower fell! Flashbacks of watching the plane hit Tower Two filled my mind. The shock, the disbelief knowing that reality was changed as the grids began to implode. I remember the smoke billowing into the sky making its way towards my home. The feeling was, "This can't be happening!"

There was a strange haze hovering over the ocean all day. I watched it through my window as I did my readings. Though usually burning off in with the onset of daybreak, this fog remained almost stationery throughout the day. My first client thought it was surreal, almost mystical. As the peal of the Fire Department Bell was sounded during the memorial ceremony, foghorns echoed through this mist over the waterway. It was a sorrowful reminder of our tragedy as a city, country, and a collective consciousness.

Throughout the day, clients came to the room were I do my readings. There were spirits here to see them, but many old friends who had crossed over on 9/11. My clients and I heard the sounds of chirping birds and music playing, in the room.

We felt an eerie presence as if spirit were returning for the closure, joining the two dimensions, one in sorrow, one in consolation.

Today we remembered those who lost their lives on 9/11. So many have crossed over since that time.

The fire bell sounded out a 5-5-5-5 fire code. How ironic as that is the code for the next reality.


Ceremony Mark End of the 9/11 Effort

The solemn service marking the end of 8 months of cleanup began with a bell sounding out the 5-5-5-5 fire code - four sets of five rings, in memory of 343 fallen firefighters lost at ground zero. The first bell rang at precisely 10:29 a.m., the time that the second tower collapsed in a screech of twisting steel and falling concrete Sept. 11.

The empty, flag-draped stretcher symbolizing the missing was carried up a 500-foot ramp from the pit where workers labored around the clock.

The stretcher was loaded into an FDNY ambulance as a dozen pallbearers saluted. As the ambulance and a truck carrying the last beam from the site drove up the ramp, only the wind and the rumble of vehicles was audible at times. The crowd, including people watching from neighboring buildings, stood mutely during the grim procession.

The sounds of taps, played by police and fire buglers, floated across the warm May morning before bagpipers played "America the Beautiful."

Thousands gathered at the site, now a seven-story pit and once the basement of the twin skyscrapers that anchored lower Manhattan. Mayor Michael Bloomberg and his predecessor, Rudolph Giuliani, were among the many public officials at the event.

As the ceremony concluded, the crowd burst into spontaneous applause for the parade of police officers, firefighters and construction workers exiting ground zero. Some tossed flowers into the void where the towers once stood. "We will never forget," a banner read. In the crowd, family members held photographs of their loved ones pressed over their hearts. Of the more than 2,800 people killed in the terrorist attack, remains of 1,102 have been identified. Nearly 20,000 body parts have been recovered.

City officials said the sifting for body parts in a landfill and the identification process will go on for months. Those human remains that cannot be identified will be retained, in case new technology someday makes it possible.

"It's hard to remember on 9/11 with all of the twisted steel and concrete ...," Bloomberg said earlier on NBC's "Today" show. "But the fact of the matter is the people that survived are the ones that we have to go on. We have to make sure they do not forget and that they build for the future." At the ceremony, a flatbed truck carrying the trade center's last steel beam followed the ambulance. The beam stood until Tuesday night, when it was cut down during a ceremony for ground zero workers.

The 30-foot column survived when the towers collapsed into a mountain of 1.8 million tons of rubble. For months it was buried in debris, but it was revealed as the rubble disappeared, still standing where it was planted when the south tower was built. The beam, set on the truck and draped with a black cloth, American flag and bouquet of flowers, was being taken to a Kennedy Airport hangar for storage.

The unprecedented cleanup effort finished several months earlier than originally anticipated and at a fraction of the estimated cost. But while many victims have been identified, the end of the operation leaves numerous others without their family members' remains.

Several family groups had asked Bloomberg to schedule Thursday's service on a weekend, so that work and school schedules would not be disrupted. The mayor said the city avoided the weekend so it would not conflict with religious observances. He also said May 30 was the traditional date for Memorial Day. To accommodate those who could not attend the ceremony, the family groups have planned their own service at ground zero on Sunday.